Lac de Salanfe is a lake in the municipality of Evionnaz, Valais, Switzerland. The reservoir is located at an elevation of 1925 m. Its surface area is 1.62 km2 (0.63 sq mi).

It can be reached by 6.5 km-long footpath from Vernayaz.

The dam Salanfe was completed in 1952.

Different major walking trails cross in Salanfe. The two biggest are 'Le tour des Dents du Midi' and the Via Alpina. Many hikers stay the night at the refuge situated next to the lake. [1] 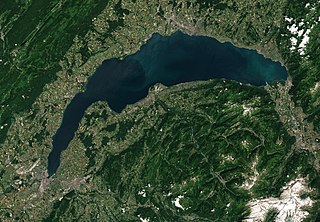 Lake Geneva is a deep lake on the north side of the Alps, shared between Switzerland and France. It is one of the largest lakes in Western Europe and the largest on the course of the Rhône. Of it 59.53% comes under the jurisdiction of Switzerland, and 40.47% under France.

Lake Saint Pierre is a lake in Quebec, Canada, a widening of the Saint Lawrence River between Sorel-Tracy and Trois-Rivières. It is located downstream, and northeast, of Montreal; and upstream, and southwest, of Quebec City. The end of the lake delimits the beginning of the estuary of Saint Lawrence.

Lake Neuchâtel is a lake primarily in Romandy, in the French-speaking part of Switzerland. The lake lies mainly in the canton of Neuchâtel, but is also shared by the cantons of Vaud, Fribourg, and Bern.

The Des Lacs National Wildlife Refuge is located in the U.S. state of North Dakota and extends from the Canada–United States border to near the town of Kenmare, North Dakota along Des Lacs Lake. The refuge was established in 1935 and includes 19,500 acres (78.9 km2). The refuge is considered to be one of the most important bird sanctuaries in the U.S., with tens of thousands of birds using the refuge for migration and breeding. The refuge is also home to elk, moose, bison and pronghorn.

Lac de Joux is a lake in the Vallée de Joux in the Canton of Vaud, Switzerland. With a surface area of 9.5 km², it is the largest lake in Switzerland lying above 1,000 metres. Lac de Joux is located in the Jura Mountains. 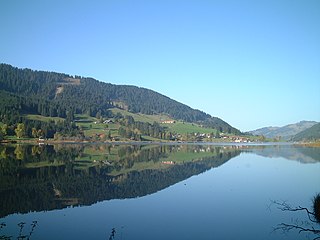 Schwarzsee or Lac Noir, , is a small lake in the Canton of Fribourg, Switzerland with an area of 0.47 km2 (0.18 sq mi). The lake in the Swiss Prealps is bordered by the peaks of Schwyberg in the West, Les Reccardets and Spitzfluh in the South, as well as Kaiseregg.

Lac d'Émosson is a reservoir in the canton of Valais, Switzerland. It is located in the municipalities of Salvan and Finhaut. The closest small city in Switzerland is Martigny. The lake has a surface area of 3.27 km² and an elevation of 1,930 m. The maximum depth is 161 m. The purpose of the Émosson Dam is hydroelectric power generation. Water from the reservoir first powers the 189 MW Vallorcine Power Station downstream and just over the border in Vallorcine, France. Water is then sent through a headrace tunnel to the 162 MW La Bâtiaz Power Station, 12 km (7 mi) to the east in Martigny, Switzerland. The drop between the dam and La Bâtiaz Power Station is 1,400 m (4,593 ft). 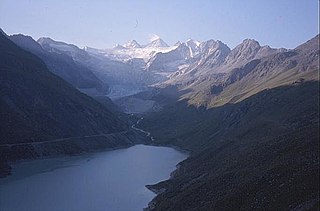 Lac de Moiry is a reservoir in the municipality of Grimentz, Switzerland. The lake has a surface area of 1.40 km² and an elevation of 2,249 m. The maximum depth is 120 m. 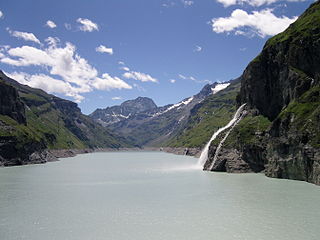 Lac de l'Hongrin is a reservoir in Vaud, Switzerland. The reservoir with a surface area of 1.60 km2 (0.62 sq mi) is located in the municipalities of Château-d'Œx and Ormont-Dessous. The two arch dams Hongrin Nord and Hongrin Sud were completed in 1969. The Dam helps with hydro electricity, and stops flooding in the area. 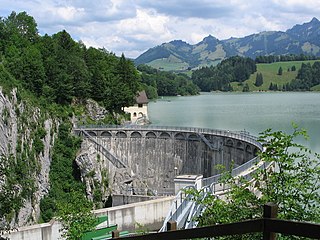 Lac de Montsalvens is a reservoir in the Canton of Fribourg, Switzerland. The reservoir has a capacity of 12.6 million m³ and a surface area of 0.74 km2 (0.29 sq mi). It is located on the road to Jaun Pass, between the villages of Broc and Charmey.

Lac de Moron is a reservoir formed by damming the Doubs River on the border of France and Switzerland. It can be reached from Les Planchettes or Les Brenets in the Canton of Neuchâtel (Switzerland) and from Le Barboux in the Doubs department (France).

Lac de Cleuson is a reservoir in the municipality of Nendaz, Valais, Switzerland. Its surface area is 0.51 km2 (0.20 sq mi). Water from the reservoir is often pumped into the Grande Dixence Dam's reservoir, Lac des Dix, for use in hydroelectricity production. 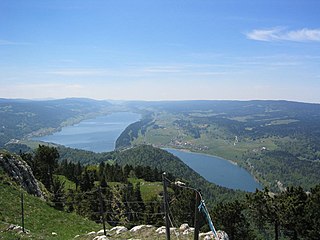 Lac Brenet is a lake in the Vallée de Joux, canton of Vaud, Switzerland. It is located north of the Lac de Joux, only 200 metres away. Its elevation of 1002 metres is 2 metres below that of Lac de Joux. 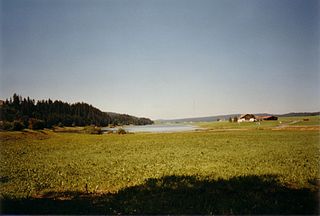 Lac des Taillères is a lake in the la Brévine valley in the Canton of Neuchâtel, Switzerland. Its surface area is 0.45 km2 (0.17 sq mi).

Lac de Taney is a lake in Valais, Switzerland. Its surface area is 17 ha.

The 18,208-acre (73.69 km2) Rice Lake National Wildlife Refuge was established in 1935 and is located in the scenic forest and bog area of northern Minnesota. Visitors can enjoy a range of habitats, including lake, river, bog and hardwood forest.

Mille Lacs Lake is a large but shallow lake in the U.S. state of Minnesota. It is located in the counties of Mille Lacs, Aitkin, and Crow Wing, roughly 75 miles north of the Minneapolis-St. Paul metropolitan area.