Lawrence Hayward [1] [2] [3] (born 12 August 1961), mononymously known as Lawrence, is an English singer, songwriter and guitarist. He is known as the frontman in the British indie pop bands Felt, Denim, and Mozart Estate (formerly Go-Kart Mozart). He has never used his surname in credits or press for his work.

Felt released ten albums in the 1980s, and Lawrence was the only constant member of the band from its inception in 1979 to its dissolution in 1989, though he doesn't appear at all on the band's penultimate album, Train Above The City , despite being present at the recording sessions. During his time in the band, he served as lyricist and co-songwriter, together with then-lead guitarist Maurice Deebank, who left the band in 1985. [4]

After the dissolution of Felt, Lawrence formed Denim. Influenced lyrically by Lawrence's upbringing during the 1970s and stylistically by bubblegum and glam rock, Denim released two albums in the 1990s, plus a compilation of B-sides and extra tracks, but mainstream success continued to elude Lawrence. A third album (sometimes referred to as Denim Take Over) was shelved indefinitely, and a standalone single "Summer Smash" was withdrawn from being released shortly after the death of Princess Diana. Lawrence co-wrote the first single by Shampoo, "Blisters and Bruises", released in 1993.

1999 saw the full-length debut of Lawrence's current project, Go-Kart Mozart, released through his personal imprint, West Midlands Records and distributed by Cherry Red. The 2005 follow-up was titled Tearing Up The Album Chart– a wry comment on his failure to achieve commercial success, a habit the album itself did nothing to break. UNCUT awarded Lawrence the dubious honour of being "one of the stars fame forgot." [5]

In 2006, Lawrence began working on a new Go-Kart Mozart album entitled On the Hot Dog Streets that was eventually released in June 2012 to coincide with the nationwide premiere of Lawrence of Belgravia, which documented the making of the record. Though once again a commercial failure, the album has received the most acclaim and attention of any Lawrence related project since Back in Denim.

Filmmaker Paul Kelly directed a documentary about Lawrence, titled Lawrence of Belgravia (a reference both to the Welshman who led the Arab Revolt and the district of Central London in which Lawrence resided), which was set to premiere at the London Film Festival in 2006, but wasn't ready at the time. A 20-minute work-in-progress version of the documentary was screened at the Barbican Centre in London in November 2008. [6] A final finished cut of the film had its debut screening at the 2011 London Film festival, followed by screenings in several film and music festivals. A DVD release of the film with a limited run of 2,000 copies surfaced in June 2016.

Due to his reclusive public persona, Lawrence has given very little information away about his personal life, aside from the fact that he was born at 12 Melville Road in Edgbaston, Birmingham, as referred to in the Felt song "Mobile Shack", though moved as a child to the nearby village of Water Orton, Warwickshire, where he met founding Felt members Maurice Deebank and Nick Gilbert. [7] Early on he was heavily influenced by Tom Verlaine of Television in both his guitar-playing and his idiosyncratic vocals. [8] He now lives in a tower block close to the Old Street Roundabout in Hackney, London. [9]

In 2018, Lawrence was awarded Maverick of the Year at the Q Awards.

with Go-Kart Mozart and Mozart Estate

Creation Records Ltd. was a British independent record label founded in 1983 by Alan McGee, Dick Green, and Joe Foster. Its name came from the 1960s band The Creation, whom McGee greatly admired. The label ceased operations in 1999, although it was revived at one point in 2011 for the release of the compilation album Upside Down.

Felt were an English indie pop band, formed in 1979 in Water Orton, Warwickshire, and led by the mononymous Lawrence. They were active for ten years through the 1980s, releasing ten singles and ten albums. The band's name was inspired by Tom Verlaine's emphasis of the word "felt" in the Television song "Venus".

Mozart Estate, formerly known as Go-Kart Mozart, are an English indie pop band founded by Lawrence, previously of the bands Felt and Denim. Lawrence formed the group as a reaction to his previous bands' lack of commercial success. He has called it "the world's first B-side band," which he explains "simply meant that you would take away the pressure of I've got to write a hit single, I've got to write an album that's going to get in the top ten." The band's original name is derived from a line in the song "Blinded by the Light" by Bruce Springsteen.

The Splendour of Fear is the second album by English alternative rock band Felt, released in 1984. It is a largely instrumental album based around long guitar passages inspired by classical guitar music, with only tracks 2 and 5 having any lyrics.

Crumbling the Antiseptic Beauty is the debut album by the English rock band Felt. Recorded in 1981, it was released on February 1982 by Cherry Red Records. Band leader Lawrence features on the cover.

Maurice Deebank is a classically trained English guitarist. He was the co-founder and lead guitarist of the British indie band Felt from its debut album until 1985, and was responsible for the ornate, atmospheric guitar work found on many of the band's early recordings. During his tenure in Felt he co-wrote most of its material with frontman Lawrence.

Back in Denim is the debut album by British rock band Denim. 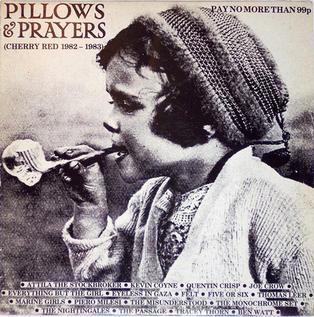 Pillows & Prayers is a compilation album released Christmas 1982, featuring artists on the Cherry Red record label. The record was originally sold at 99 pence, which helped ensure that the album peaked and remained at number 1 on the UK Indie Chart for five weeks and sold over 120,000 copies. 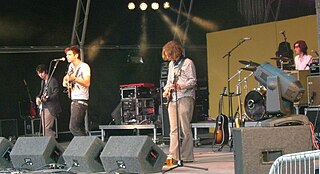 Cherry Ghost were an English music group which began in 2005, first as an alias for singer-songwriter Simon Aldred as a solo artist, before morphing into a full band. Their debut album, Thirst for Romance, was released in July 2007 and entered the UK Album Charts at No. 7. It was nominated for an Ivor Novello award as well as winning Aldred an Ivor Novello for best song "People Help the People". A second album, titled Beneath This Burning Shoreline, was released in July 2010 to positive critical acclaim. Aldred, under the moniker Out Cold, released a solo album titled Invasion of Love in September 2013, featuring a markedly synthpop sound. Cherry Ghost released their third and final album Herd Runners in May 2014; Aldred last performed with Cherry Ghost in 2016 on the Marc Riley Show on BBC Radio 6 Music.

Tearing Up the Album Chart is an album by the band Go-Kart Mozart. It was released in 2005 on West Midland's Records, a subsidiary of Cherry Red. It was former Felt and Denim frontman Lawrence's second album under the alias Go Kart Mozart. Tracks 5, 8, 9 and 12 were originally recorded for the unreleased Denim album Denim Take Over.

Instant Wigwam and Igloo Mixture is the debut album by the band Go-Kart Mozart. It was released in 1999 on West Midlands Records, a subsidiary of Cherry Red. It was former Felt and Denim frontman Lawrence's first album under the alias Go Kart Mozart. Its cover features a shot of Birmingham's Bull Ring Centre as built in 1964, shortly before it was redeveloped.

Denim were an English indie rock band, the brainchild of Lawrence, and was based in Birmingham, England.

Douglas Arrowsmith is a Canadian film director and writer. He has produced award-winning documentaries for CBC Television, music videos, and feature-length films for BBC Four, The Movie Network and HBO Canada.

On the Hot Dog Streets is the third studio album by the band Go-Kart Mozart, the musical project of former Felt and Denim frontman Lawrence. It was released in 2012 on West Midlands Records, a subsidiary of Cherry Red.

Absolute Classic Masterpieces is the third compilation album by English alternative rock band Felt, released in 1992. It collects tracks from the band's singles and albums recorded for Cherry Red between 1981 and 1985, with two exceptions: "Dance of Deliverance" from guitarist Maurice Deebank's album, Inner Thought Zone; and "Index", a single recorded and released by leader Lawrence before the band formed properly. Tracks 4, 9, 11, 15 and 18 are instrumental.

Stains on a Decade is the fifth compilation album by English alternative rock band Felt, released in 2003. A career-spanning collection, it contains tracks from the band's singles released between 1981 and 1988, with one album-track exception: "Dismantled King Is Off The Throne".

Bubblegum Perfume is the second compilation album by English alternative rock band Felt, released in 1990. It collects tracks from the band's singles and albums recorded for Creation Records between 1986 and 1988. Tracks 5, 8, 13, 16 and 19 are instrumental.

Mozart Estate Present Go-Kart Mozart in Mozart's Mini-Mart is the fourth studio album by Go-Kart Mozart, the musical project of former Felt and Denim frontman Lawrence. It was released on February 23, 2018 on West Midlands Records, a subsidiary of Cherry Red.