Lisa Schulte (born 1956) is an American artist, also known as "The Neon Queen", who is best known for her work in expressive neon sculpture. Schulte started bending neon in the early 1980s, creating custom neon signs and neon prop rentals to the entertainment industry under her Los Angeles-based neon studio, Nights of Neon. [1] She is recognized for working with light as an artist and designer, and owner of one of the largest neon collections in the world. [2]

Schulte was born in Long Island, New York. [3] At the age of 7, she was shot in the eye and lost her sight for 3 months which was a significant moment in her childhood that changed her sense of light. [4]

Schulte began her career in working with light when she was 17 operating light boards in nightclubs. In 1984, a production company selected Schulte to design a futuristic installation at the Pacific Design Center for the 1984 Summer Olympics held in Los Angeles that year. [4]

In 2008, during the global financial crisis, Schulte decided to create her own business and started the Nights of Neon, a 25,000-square-foot studio in Los Angeles that followed with group shows, solo shows and museum exhibitions. [2]

In 2010, Schulte decided to dedicate her time as a fine artist working in neon sculpture with dimensional light forms. Her earliest artistic works stemmed from her background in neon signage. Her first exhibition was in 2010 at the Church Gallery in Santa Barbara, California. Schulte began experimenting with abstract forms, neon sculptures reminiscent of the Spirograph drawing toy on metal developed by British engineer Denys Fisher in the 1960s. [5]

In 2014, she had her first solo exhibition at the Hinge Modern Gallery in Culver City, California and presented her work at Los Angeles County Museum of Art in Journey Of A Dress: Diane Von Furstenberg exhibition. [6] [7] [8] In the same year, her forms evolved to using organic materials, creating large three-dimensional sculptures with driftwood which she premiered at the Lancaster Museum of Art and History (MOAH). [9] [10]

In 2015, she was signed by Volkz Clark Gallery in New York and represented the gallery at Pulse Miami later that year. [11] In 2016, Schulte’s work was featured on the cover of Gotham Magazine. [12] Schulte served as board member for the Museum of Neon Art in Glendale, California. [13] Schulte is currently represented by the Voltz Clarke Gallery in New York City and Samuel Lynne Galleries in Dallas, Texas. [14]

In 2017, Schulte and Brendan Donnelly collaborated at Grand Central Market to create a Bulleit Frontier Whiskey neon art sign as part of a fundraising campaign for the Museum of Neon Art. [15] In the same year, the Cut announced that Schulte has between 10,000 and 20,000 pieces in her personal collection. [16] In 2018, Los Angeles magazine named Schulte as a local legend of the craft. [17]

In 2013, at the Museum of Neon Art, Schulte created A Conversation, "a 10- by 20-foot wall of emojis, following a distinct conversation using only hugs, smiles, hearts and many more symbols that seem to have replaced conversation as we knew it, before social media." according to San Pedro's Random Lengths News. [22] [23] [24]

This two-part work with Cleon Peterson is a depiction of brutality and aggression, finding uncomfortable truths in the violence of the everyday. Black and white figures act out stabbings, tangled in moments of police brutality, the writhing bodies recall classic Greco-Roman wrestlers. [25]

Liliana Diane Lakich is an American artist, best known for her work in neon sculpture. As a child, she had been fascinated by neon advertising, and she built her career around illuminated art, with its special emotional power. Lakich has received many private and public art commissions, in one case assisting the city of Los Angeles in a street-lighting project. She also co-founded the Museum of Neon Art (MONA), the first specialist collection of art in electric media. Her sculptures have been featured in major publications on contemporary sculpture. 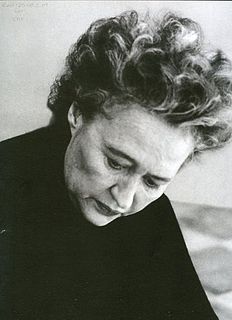 Chryssa Vardea-Mavromichali was a Greek American artist who worked in a wide variety of media. An American art pioneer in light art and luminist sculpture, known for her neon, steel, aluminum and acrylic glass installations, she always used the mononym Chryssa professionally. She worked from the mid-1950s in New York City studios and worked since 1992 in the studio she established in Neos Kosmos, Athens, Greece.

Jen Stark is a multi-media American artist who lives and works in Los Angeles, California. Stark is best known for creating optical art using psychedelic colors in patterns and drips that mimic intricate motifs found in nature. On March 26, 2021, Stark became a notable non-fungible token maker when Farzin Fardin Fard won a bid to buy her piece Multiverse for 150 Ethereum.

Alexandra Annette Grant is an American visual artist who examines language and written texts through painting, drawing, sculpture, video, and other media. She uses language and exchanges with writers as a source for much of that work. Grant examines the process of writing and ideas based in linguistic theory as it connects to art and creates visual images inspired by text and collaborative group installations based on that process. She is based in Los Angeles.

Hannah Stouffer is an American artist, illustrator and art director living and working in Los Angeles, California. She became known through her art exhibitions, as well as for her contributions to the making of individual and collective art installations and murals worldwide. As a book author, her curatorial review of contemporary ceramics and its methods The New Age of Ceramics has received distinct attention in specialized art sources. Stouffer also acted as curator and designer of illuminated works Lust for Light, printed and distributed by Gingko Press.

Rafael Reyes, also credited as Leafar Seyer, is an American author, artist and musician credited with creating the Cholo goth genre of music, which lyrically explores the harsh realities of gang and street life over throbbing beats and swirling synthesizers. 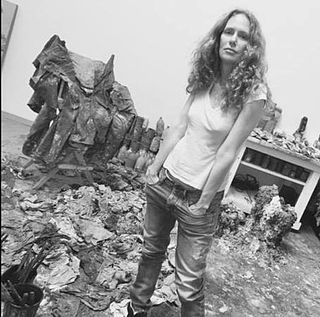 Fawn Rogers is an American contemporary multidisciplinary artist. She works within painting, photography, video, and sculptural installation. She has work shown in museums and galleries, alongside non-traditional locations on four continents. 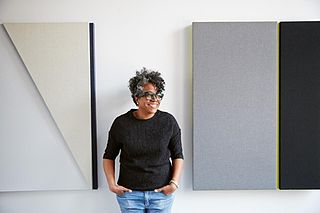 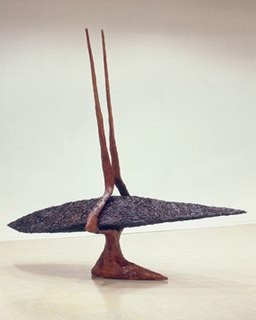 Coleen Sterritt is an American sculptor known for abstracted, hybrid works made from a myriad of everyday objects and materials, combined in unexpected ways. Writers root her work in the tradition of post-minimalists Jackie Winsor, Eva Hesse and Nancy Graves, and assemblage artists such as Louise Nevelson, Robert Rauschenberg and Marisa Merz; she is sometimes associated with contemporaries Jessica Stockholder, Nancy Rubins, and Tony Cragg. Sculpture critic Kay Whitney suggests Sterritt's work "expands and reinterprets three of the most important artistic inventions of the 20th Century—collage, abstraction and the readymade"— in play with the traditions of Arte Povera bricolage and Surrealist psychological displacement. Curator Andi Campognone considers Sterritt one of the most influential post-1970s artists in establishing "the Los Angeles aesthetic" in contemporary sculpture, while others identify her as an inspiration for later West Coast artists creating hand-made, free-standing sculpture counter to trends toward interventions, public art and environmental works. Constance Mallinson writes that Sterritt's work "walks a line between charm and threat, the natural, the industrial and the hand fabricated, rejecting easy associations for complex reads." Los Angeles Times critic David Pagel calls it smart, funky and "subtly rebellious" in its refashioning of discarded material, dumpster finds, and art-historical lineages.

MOAH, the Museum of Art and History, is located in Lancaster, California. The museum's exhibits focus on post-war American art with an emphasis on California art. MOAH also preserves and exhibits historical artifacts from the Antelope Valley and offers exhibitions of local artists. At its current location, MOAH is an anchor of the BLVD, the community-focused development of Lancaster Blvd. Opened in 2012, the Museum consists of three floors and 20,000 square feet of programmable space. Special focus is given to exhibitions and engagement that connect relevant arts to the region's history, ranging from Native Americans and pioneers to aerospace.

Mary Weatherford is a Los Angeles-based painter. She is known for her large paintings incorporating neon lighting tubes. Her work is featured in museums and galleries including the Hirshhorn Museum and Sculpture Garden, Brooklyn Museum, Museum of Modern Art, and the High Museum of Art. Weatherford's solo exhibitions include Mary Weatherford: From the Mountain to the Sea at Claremont McKenna College, I've Seen Gray Whales Go By at Gagosian West, and Like The Land Loves the Sea at David Kordansky Gallery, Los Angeles. Her work has been part of group exhibitions at the Museum of Modern Art and the Rose Art Museum at Brandeis University.

Lisa C Soto is a visual artist based in Los Angeles, California. The themes of her work are informed by both "her Caribbean heritage and her continuous movements between continents and islands." Soto's drawings, installations and sculptures embody the struggle between connections and disconnections. Supporting the belief that all things, seen and unseen are essentially linked. There is a conversation that includes a personal and a universal situation, an interplay between the micro and the macro. Questioning the endless conflicts, the creation of artificial differences, and the establishment of borders. While exploring the essence of the forces at work in the macrocosm. Shaping what those energies, frequencies, and vibrations might look like.

Lauren Bon is an artist who works with architecture, performance, photography, sound, and farming, to create urban, public, and land art projects that she terms "devices of wonder" to galvanize social and political transformation.

Kandis Williams is an artist, writer, editor, and publisher. Williams has received critical acclaim for her collage art, performance art, and publishing work. Williams lives and works in Los Angeles and Berlin. Williams is known for her art exploring racial issues, nationalism, and many other categories.

Patrick Martinez is a visual artist based in Los Angeles. He works in mixed-media landscape paintings, neon sign artwork, as well as his Pee Chee collection of works. One of his signature styles of art is depicting and memorializing victims of abuse as the subjects of his art.