Last updated August 19, 2022
This is a dynamic list and may never be able to satisfy particular standards for completeness. You can help by adding missing items with reliable sources.

Carillons, musical instruments in the percussion family with at least 23 cast bells and played with a keyboard, are found throughout the British Isles as a result of the First World War. During the German occupation of Belgium, many of the country's carillons were silenced or destroyed. This news circulated among the Allied Powers, who saw it as "the brutal annihilation of a unique democratic music instrument". [1] [2] The destruction was romanticized in poetry and music, particularly in England. Poets –often exaggerating reality –wrote that the Belgian carillons were in mourning and awaited to ring out on the day of the country's liberation. Edward Elgar composed a work for orchestra which includes motifs of bells and a spoken text anticipating the victory of the Belgian people. [3] He later even composed a work specifically for the carillon. [4] Following the war, countries in the Anglosphere built their own carillons to memorialise the lives lost and to promote world peace, [2] including two in England. [5]

The Carillon Society of Britain and Ireland (CSBI) counts carillons throughout the British Isles. [6] Dove's Guide for Church Bell Ringers , a publication that historically concerns itself with bell sets outfitted for full circle ringing, also counts carillons in the region. [7] According to the two sources, there are fifteen carillons: eight in England, one in the Republic of Ireland, one in Northern Ireland, and five in Scotland. There are no carillons in Guernsey, the Isle of Man, Jersey or Wales. [6]

The heaviest carillon is at the Kirk of St Nicholas in Aberdeen, Scotland, weighing 25,846 kilograms (56,981 lb); the lightest is at the Atkinsons Building in London, weighing 3,194 kilograms (7,041 lb). The carillon of St Colman's Cathedral in Cobh has the most bells –49. The region has several two- and three-octave carillons. The heaviest two-octave carillon in the world –weighing 22,669 kg (49,976 lb) –is located in Newcastle upon Tyne. [8] The carillons were primarily constructed in the interwar period by the English bellfounders Gillett & Johnston and John Taylor & Co. [6] Almost all of the carillons are transposing instruments, all of which transpose such that the lowest note on the keyboard is C. [6]

According to the World Carillon Federation  [ nl ], the carillons of the British Isles account for two percent of the world's total. [9]

According to the CSBI, there is one carillon in the Republic of Ireland, which is located at St Colman's Cathedral in Cobh. [6] In 2019, playing this cathedral's carillon was recognized by the Irish government as key element of the country's living cultural heritage. [29] 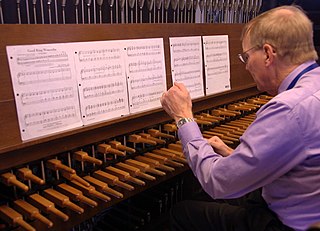 A carillon is a pitched percussion instrument that is played with a keyboard and consists of at least 23 cast bronze bells. The bells are in fixed suspension and tuned in chromatic order so that they can be sounded harmoniously together. Often housed in bell towers, carillons are usually owned by churches, universities, or municipalities. The bells are struck with clappers connected to a keyboard of wooden batons played with the hands and pedals played with the feet. Often, carillons include an automatic system through which the time is announced and simple tunes are played throughout the day. 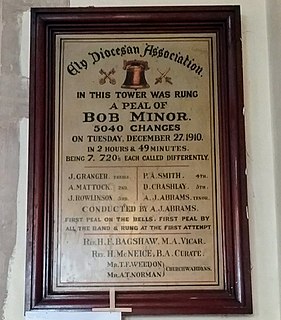 Change ringing is the art of ringing a set of tuned bells in a tightly controlled manner to produce precise variations in their successive striking sequences, known as "changes". This can be by method ringing in which the ringers commit to memory the rules for generating each change, or by call changes, where the ringers are instructed how to generate each change by instructions from a conductor. This creates a form of bell music which cannot be discerned as a conventional melody, but is a series of mathematical sequences.

Campanology is the scientific and musical study of bells. It encompasses the technology of bells – how they are founded, tuned, and rung – as well as the history, methods, and traditions of bellringing as an art. 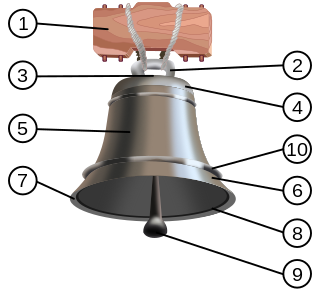 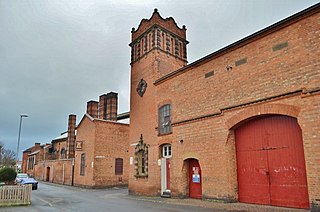 John Taylor Bell Foundry (Loughborough) Limited, trading as John Taylor & Co and commonly known as Taylor's Bell Foundry, Taylor's of Loughborough, or simply Taylor's, is the world's largest working bell foundry. It is located in Loughborough, in the Charnwood borough of Leicestershire, England. The business originated in the 14th century, and the Taylor family took over in 1784.

The Cathedral Church of St Colman, usually known as Cobh Cathedral, or previously Queenstown Cathedral, is a single-spire cathedral in Cobh, Ireland. It is a Roman Catholic cathedral and was completed in 1919. Built on Cathedral Place, it overlooks Cork harbour from a prominent position, and is dedicated to Colmán of Cloyne, patron saint of the Diocese of Cloyne. It serves as the cathedral church of the Diocese.

Gillett & Johnston was a clockmaker and bell foundry based in Croydon, England from 1844 until 1957. Between 1844 and 1950, over 14,000 tower clocks were made at the works. The company's most successful and prominent period of activity as a bellfounder was in the 1920s and 1930s, when it was responsible for supplying many important bells and carillons for sites across Britain and around the world. 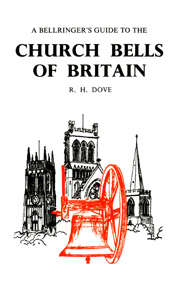 Dove's Guide for Church Bell Ringers is the standard reference to the rings of bells hung for English-style full circle ringing. The vast majority of these "towers" are in England and Wales but the guide includes towers from the rest of the British Isles as well as a few from around the world. The latest edition is Dove’s Guide for Church Bell Ringers to the Rings of Bells of the World. 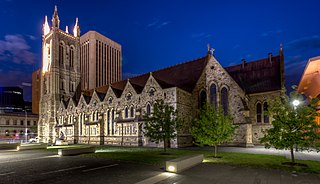 St Francis Xavier's Cathedral is a Roman Catholic cathedral in Adelaide, South Australia. It is classified as being a Gothic Revival building in the Early English style. The tower stands 36 m high and is 56.5 m lengthwise and 29.5 m horizontally. The foundation stone was laid in 1856 and the building was opened in 1858. The construction of the tower began in 1887. However, it was not completed until 1996.

Rudhall of Gloucester was a family business of bell founders in the city of Gloucester, England, who between 1684 and 1835 cast more than 5,000 bells.

Taunton Minster is a Church of England parish minster church in Taunton, Somerset, England, dedicated to Jesus' companion Mary Magdalene. It was completed in 1508 and is in the Early Tudor Perpendicular Gothic style. It is designated as a Grade I listed building. It is notable for its very tall tower.

The Church of St Mary, Lowe House is a Roman Catholic Parish church situated on North Road in St Helens, Merseyside. The present church was founded in 1924 and staffed by the Society of Jesus until 1981. It is a Grade II listed building with Romanesque and Gothic features. 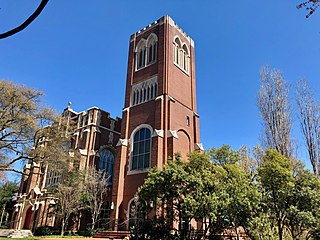 St. Luke's Episcopal Church is an Episcopal church in Atlanta, Georgia. The parish was founded in 1864, with the current building on Peachtree Street constructed in 1906.

Campanology is the scientific and musical study of bells. It encompasses the technology of bells – how they are cast, tuned, and rung – as well as the history, methods, and traditions of bellringing as an art. Articles related to campanology include: