The non-avian reptiles of Australia are a diverse group of animals, widely distributed across the continent. Three of the four reptile orders are represented: Testudines, Squamata and Crocodilia. The only missing extant order is Sphenodontia, containing the tuataras, which are endemic to New Zealand. Australia has over 860 species, a large number in comparison to other continents; for example, North America's total is about 280. [1] The most species-rich group is Squamata, the snakes and lizards. They are especially diverse in the arid areas of Australia, where other fauna are scarcer. Spinifex grass is a major habitat which allows them to remain in a relatively cool, moist area.

Australia has a large array of reptiles which can be dangerous to humans. The world's largest reptile, the saltwater crocodile (Crocodylus porosus), is native to the continents's north coastal area. 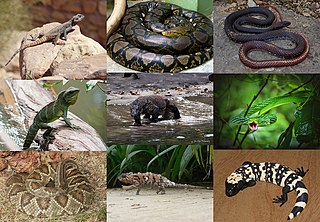 Squamata is the largest order of reptiles, comprising lizards, snakes, and amphisbaenians, which are collectively known as squamates or scaled reptiles. With over 10,900 species, it is also the second-largest order of extant (living) vertebrates, after the perciform fish. Members of the order are distinguished by their skins, which bear horny scales or shields. They also possess movable quadrate bones, making possible movement of the upper jaw relative to the neurocranium. This is particularly visible in snakes, which are able to open their mouths very wide to accommodate comparatively large prey. Squamata is the most variably sized order of reptiles, ranging from the 16 mm (0.63 in) dwarf gecko to the 5.21 m (17.1 ft) green anaconda and the now-extinct mosasaurs, which reached lengths over 14 m (46 ft). 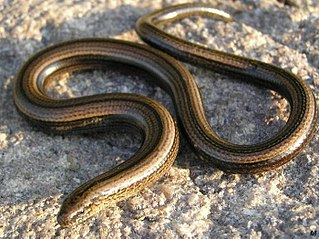 Anguidae refers to a large and diverse family of lizards native to the Northern Hemisphere. Common characteristics of this group include a reduced supratemporal arch, striations on the medial faces of tooth crowns, osteoderms, and a lateral fold in the skin of most taxa. The group includes the slowworms, glass lizards, and alligator lizards, among others. The family is divided into three subfamilies, and contains about 100 species in 10 genera. 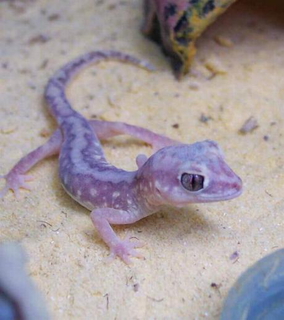 The beaded gecko is a gecko endemic to Australia. 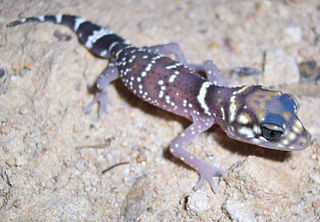 Underwoodisaurus is a small genus of Australian lizards in the family Carphodactylidae. Member species are commonly known as thick-tailed geckos, along with the species Uvidicolus sphyrurus. 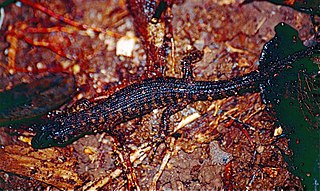 The prickly skink, or prickly forest skink, is a morphologically and genetically distinctive species of skink endemic to rainforests of the Wet Tropics of Queensland World Heritage Area, in north-eastern Australia. Unlike most small skinks, which have smooth scales, this species has rough, ridged and pointed scales. These keeled scales may be an adaptation to its high-rainfall habitat, to its microhabitat in rotting logs, or to camouflage it when moving through forest leaf-litter. 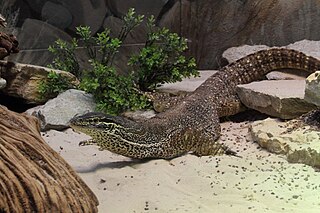 The yellow-spotted monitor(Varanus panoptes), also known as the Argus monitor, is a monitor lizard found in northern and western regions of Australia and southern New Guinea.

Ranoidea platycephala, commonly known as the water-holding frog, is a frog common to most Australian states. It differs from most other members of the family Pelodryadidae as a ground dweller and the ability to aestivate. It can live for five years without drinking.

The yellow-faced whip snake is a species of venomous snake in the family Elapidae, a family containing many dangerous snakes. D. psammophis is endemic to Australia, found throughout the continent in a variety of habitats from coastal fringes to interior arid scrubland.

Anilios endoterus, formally Ramphotyphlops endoterus, is commonly known as the interior blind snake. It is one of 42 species of snake in the genus Anilios (Ramphotyphlops) from the Typhlopidae family living in Australia. These snakes appear to be blind, only having vestigial eyes that are extremely sensitive to light. It is a cryptic burrowing snake that lives in tunnels underground, living mainly on a diet of ants. They are found in arid and semi-arid desert regions of central Australia and are considered endangered in New South Wales (NSW). 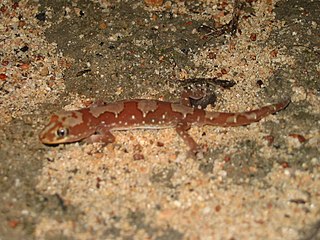 Lucasium steindachneri, commonly called the box-patterned gecko or Steindachner's gecko, is a species of nocturnal, medium-sized lizard in the family Diplodactylidae. The species has a pale strip with three patches of brown along its back. This gecko is terrestrial and only found in arid and semi-arid areas of continental Australia.

The northern spiny-tailed gecko is a species of lizard in the family Diplodactylidae. The species is endemic to Australia.

Cyrtodactylus hoskini is a species of gecko, a lizard in the family Gekkonidae. The species is endemic to Australia.

The desert egernia or unadorned desert-skink, desert skink, is a species of skink, a lizard in the family Scincidae. The desert egernia is endemic to the continent of Australia, and is widespread, with populations recorded in all mainland states and territories except the Australian Capital Territory. The desert egernia is found in dry, desert areas with deep, uncompacted sandy/loamy soils and little significant vegetation cover.

The Shark Bay south-west ctenotus, also known commonly as Youngson's ctenotus, is a species of skink, a lizard in the family Scincidae. The species is endemic to Australia.