Liternum was an ancient town of Campania, southern central Italy, near "Patria lake", on the low sandy coast between Cumae and the mouth of the Volturnus. It was probably once dependent on Cumae. In 194 BC it became a Roman colony. Although Livy records that the town was unsuccessful, [1] excavation reveals a Roman town existed there until the 4th century AD. [2]

The town is mainly famous as the residence of the elder Scipio Africanus, who withdrew from Rome and died there [3] . His tomb and villa are described by Seneca the Younger. [4] [5] In Ovid's Metamorphoses Liternum is mentioned for its mastic trees: lentisciferum... Liternum. [6] Augustus Caesar is said to have conducted a colony of veterans to Liternum.

The construction of the Via Domitiana through Liternum made it a posting station, but the town later had a malaria outbreak and went into decline. [2] In 455, the town was pillaged and destroyed by Genseric, king of the Vandals [7] .

The excavations brought to light, between 1930 and 1936, some elements of the city center (forum with a temple, a basilica and a small theater) dating from the beginning of the Roman Empire. Outside the city walls, the remains of the amphitheater and the necropolis have been identified.

Campania is an administrative region of Italy. Located on the south-western portion of the Italian Peninsula, with the Tyrrhenian Sea to the west, it includes the small Phlegraean Islands and Capri for administration as part of the region. As of 2018, the region has a population of around 5,820,000 people, making it the third-most-populous region in the country; its total area of 13,590 km2 (5,247 sq mi) makes it the most densely populated region in Italy. Campania is the most productive region in southern Italy by GDP, with Naples' urban area being the 7th-most populous in the European Union. The region is home to 10 of the 55 UNESCO sites in Italy, like Pompeii and Herculaneum, the Royal Palace of Caserta, the Amalfi Coast and the Historic Centre of Naples. Moreover, Mount Vesuvius is part of the UNESCO World Network of Biosphere Reserves.

Cumae was the first ancient Greek colony on the mainland of Italy, founded by settlers from Euboea in the 8th century BC and soon becoming one of the strongest colonies. It later became a rich Roman city, the remains of which lie near the modern village of Cuma, a frazione of the comune Bacoli and Pozzuoli in the Metropolitan City of Naples, Campania, Italy.

Capri is an island located in the Tyrrhenian Sea off the Sorrento Peninsula, on the south side of the Gulf of Naples in the Campania region of Italy. The main town Capri that is located on the island shares the name. It has been a resort since the time of the Roman Republic.

Ischia is a volcanic island in the Tyrrhenian Sea. It lies at the northern end of the Gulf of Naples, about 30 kilometres from the city of Naples. It is the largest of the Phlegrean Islands. Roughly trapezoidal in shape, it measures approximately 10 km east to west and 7 km north to south and has about 34 km of coastline and a surface area of 46.3 square kilometres (17.9 sq mi). It is almost entirely mountainous; the highest peak is Mount Epomeo, at 788 metres. The island is very densely populated, with 60,000 residents.

The Gulf of Naples, also called the Bay of Naples, is a roughly 15-kilometer-wide (9.3 mi) gulf located along the south-western coast of Italy. It opens to the west into the Mediterranean Sea. It is bordered on the north by the cities of Naples and Pozzuoli, on the east by Mount Vesuvius, and on the south by the Sorrento Peninsula and the main town of the peninsula, Sorrento. The Peninsula separates the Gulf of Naples from the Gulf of Salerno, which includes the Amalfi Coast.

The Province of Naples was a province in the Campania region of southern Italy; since January 2015 has been replaced by the Metropolitan City of Naples.

Antemnae was a town and Roman colony of ancient Latium in Italy. It was situated two miles north of ancient Rome on a hill commanding the confluence of the Aniene and the Tiber. It lay west of the later Via Salaria and now lies within a park in modern Rome. 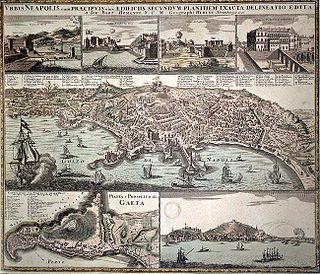 The history of Naples is long and varied. The first Greek settlements were established in the Naples area in the 2nd millennium BC. During the end of the Greek Dark Ages a larger mainland colony – initially known as Parthenope – developed around the 9-8th century BC, and was refounded as Neapolis in the 6th century BC: it held an important role in Magna Graecia. The Greek culture of Naples was important to later Roman society. When the city became part of the Roman Republic in the central province of the Empire, it was a major cultural center. Virgil is an example of the political and cultural freedom of Naples.

Posillipo is a residential quarter of Naples, southern Italy, located along the northern coast of the Gulf of Naples. 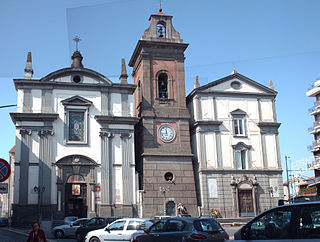 Giugliano in Campania[dʒuʎˈʎaːno iŋ kamˈpaːnja], also known simply as Giugliano, is a city and comune in the Metropolitan City of Naples, Campania, Italy. As of 2017, it had some 124,000 inhabitants, making it the most populated Italian city that is not a provincial capital.

The Temple of Concord in the ancient city of Rome refers to a series of shrines or temples dedicated to the Roman goddess Concordia, and erected at the western end of the Roman Forum. The earliest temple is believed to have been vowed by Marcus Furius Camillus in 367 BC, but it may not have been built until 218 BC by L. Manlius. The temple was rebuilt in 121 BC, and again by the future emperor Tiberius between 7 BC and AD 10.

The island of Capri is situated in the Gulf of Naples, between the Italian Peninsula and the islands of Procida and Ischia. Made of limestone, its lowest part is at the center, while its sides are high and mostly surrounded by steep precipices, which contain numerous caves. Its topography is dominated by the slopes of the Monte Solaro in the West and Mont-Saint-Michel in the East.

The Bourbon Hospice for the Poor, also called il Reclusorio, is a former public hospital/almshouse in Naples, southern Italy. It was designed by the architect Ferdinando Fuga, and construction was started in 1751. It is five storeys tall and about 354 m (1,161 ft) long. It was popularly known as "Palazzo Fuga". King Charles III of the House of Bourbon meant the facility to house the destitute and ill, as well as to provide a self-sufficient community where the poor would live, learn trades, and work. The massive structure at one time housed over 5000 persons, men and women, in separate wings The building was originally designed with five courtyards and a church in the centre, entered through the central arch, but only the three innermost courtyards were built, and plans to complete the building according to the original design were finally abandoned in 1819. The building is the centre of Naples, which is included in UNESCO World Heritage List.

The Church and Convent of the Girolamini or Gerolamini is a church and ecclesiastical complex in Naples, Italy. It is located directly across from the Cathedral of Naples on via Duomo. The facade is across the homonymous piazza and street from Santa Maria della Colonna. It is one block west of Via Duomo.

Santa Caterina a Formiello is a church in Naples, in southern Italy, located at the extreme eastern end of the old historic center of the city, on Via Carbonara and Piazza Enrico de Nicola, near the gate called Porta Capuana. The term Formiello comes from the forms or containers for water spouts found in the convent. Diagonally across the street and South is the Fontana del Formiello against the rear wall of the imposing Castel Capuano.

The Campanian Archipelago, also called Neapolitan Archipelago, is an archipelago in the Tyrrhenian Sea, in southwestern Italy. It principally comprises 5 islands: Capri, Ischia, Nisida, Procida, and Vivara. Most of the archipelago belongs to the Metropolitan City of Naples.

Licola is an area in the province of Naples which takes its name from Lago dei Follicoli, a lake which formerly occupied most of the area. The current population of Licola ranges between 4,000 and 5,000. Licola is a strip of land facing the sea, and is roughly three kilometers by ten kilometers in size. It begins at the foot of Mount Cuma and ends in Marina di Varcaturo.

Marina Grande is the main port of the island of Capri in Italy, to the north of the main town of Capri and at the foot of Mount Solaro.

Santa Maria del Soccorso is a church located within the archaeological site of Villa Jovis, on the island of Capri, Italy. It is situated on the summit of the Lo Capo hill at the eastern extremity of the island. The chapel-like church, was constructed ca. 1610. Its fittings include a bronze statue of the Madonna, a 1979 gift of the Caprese painter Guido Odierna (1913-1991). In the late 19th century, hermit lived at the church, keeping a visitor's book and selling wine.

The Ospedale degli Incurabili or Complesso degli Incurabili is an ancient and prominent hospital complex located on Via Maria Longo in central Naples, Italy. Part of the complex, including the remarkable pharmacy, are now the Museo delle arti sanitarie of Naples.