Last updated December 09, 2020
List of Lord Lieutenants of the region of Yorkshire

This is a list of people who served as Lord Lieutenant of Yorkshire .

Thomas Fairfax, 3rd Lord Fairfax of Cameron, also known as Sir Thomas Fairfax, was an English nobleman, peer, politician, general, and Parliamentary commander-in-chief during the English Civil War. An adept and talented commander, Fairfax led Parliament to many victories, notably the crucial Battle of Naseby, becoming effectively military ruler of England, but was eventually overshadowed by his subordinate Oliver Cromwell, who was more politically adept and radical in action against Charles I. Fairfax became unhappy with Cromwell's policy and publicly refused to take part in Charles's show trial. Eventually he resigned, leaving Cromwell to control the country. Because of this, and also his honourable battlefield conduct and his active role in the Restoration of the monarchy after Cromwell's death, he was exempted from the retribution exacted on many other leaders of the revolution. His dark hair and eyes and a swarthy complexion earned him the nickname "Black Tom". 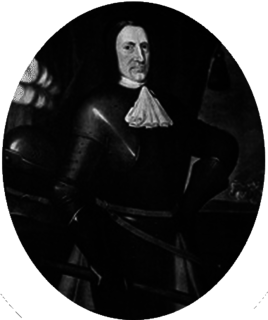 George Frederick Samuel Robinson, 1st Marquess of Ripon,, styled Viscount Goderich from 1833 to 1859 and known as The Earl of Ripon in 1859 and as The Earl de Grey and Ripon from 1859 to 1871, was a British politician who served in every Liberal cabinet from 1861 until the year before his death, which took place forty-eight years later in 1909.

The position of Lord Lieutenant of North Yorkshire was created on 1 April 1974.

The Lord Lieutenants of Humberside.

This is a list of people who have served as Custos Rotulorum of the East Riding of Yorkshire. 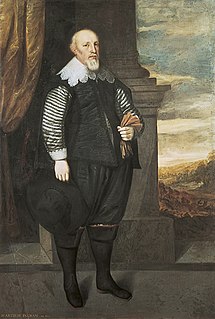 The Battle of Seacroft Moor took place in Whinmoor moor near the village of Seacroft, north-east of Leeds in West Riding on 30 March 1643 during the First English Civil War. In the battle, a Parliamentarian force commanded by Lieutenant-General Thomas Fairfax was decisively beaten by a Royalist cavalry force commanded by George Goring.

Sir William Pennyman was an English landowner, soldier and politician.

Sir Henry Cholmley (1609–1666) was an English politician who sat in the House of Commons at various times between 1641 and 1666. He supported the Parliamentary cause in the English Civil War.

The Honourable Dame Elizabeth Susan Cunliffe-Lister, DCVO, commonly known by her middle name Susan, served as the Lord Lieutenant of the East Riding of Yorkshire from 2005 until her retirement in 2019.

The Battle of Tadcaster took place during the First English Civil War on 7 December 1642, when a Royalist force attacked the Parliamentarian garrison of Tadcaster, Yorkshire, which was held by between 900 and 1,500 soldiers under the command of Ferdinando Fairfax, Lord Fairfax. Newcastle marched out of York on 6 December, and split his force of 6,000 into two; he took 4,000 infantry down the main York–Tadcaster road to attack the town from the east, while sending a deputy, the Earl of Newport, with a further 1,500 to circle around and trap the Parliamentarians by attacking from the north-west.

The Battle of Piercebridge was fought on 1 December 1642 in County Durham, England, during the First English Civil War. The Earl of Newcastle was advancing with an army of 6,000 from Newcastle upon Tyne to York to reinforce the local Royalists. Aware of his approach, the Parliamentarians defended the main crossing over the River Tees, at Piercebridge. Under the command of Captain John Hotham, around 580 troops had barricaded the bridge.

The East York Militia was a part time home defence force in the East Riding of Yorkshire. The Militia and its predecessors had always been important in Yorkshire, and from its formal creation in 1759 the regiment served in home defence in all Britain's major wars until 1919. It became a battalion of the East Yorkshire Regiment, and its role during World War I was to train thousands of reinforcements for the regiment's battalions serving overseas.