The World is the largest privately owned residential yacht. The residents, from about 45 countries, live on board as the ship travels, staying in most ports several days. Some residents choose to live on board full-time while others visit periodically throughout the year. [1] It is operated by ROW Management, Ltd., headquartered in Fort Lauderdale, Florida, United States. [2]

The World also currently holds the world record for the southernmost ship voyage. The record was broken by her Capitan Dag H. Saevik, and the 63 residents on board at the time (as well as the crewmembers). The record for the most southerly navigation reaching 78°43•997´S and 163°41•421´W at the Bay of Whales in Antarctica’s Ross Sea. The World recorded this polar record at 10:41hrs Ship’s time (New Zealand time) on 28th January 2017, this is now the furthest south any vessel has ever sailed.

The ship was the idea of Knut U. Kloster, whose family had a long history in the marine industry. [1] Her hull was built in Landskrona, Sweden, by Öresundsvarvet, and it was then towed to Fosen Mekaniske Verksted in Rissa, Norway, for completion. The vessel was launched in March 2002 and purchased by its residents in October 2003.

The management company is responsible for operations and administration of the ship, including hiring the employees. The residents, through their elected board of directors and a network of committees, provide guidance to the management about the ship's itinerary, finances, and lifestyle. [1]

There are six restaurants for dining that supplement the kitchens or kitchenettes in most of the residences. [1] For on-board entertainment there is a movie theater, library and music performances. [1] In addition to shore excursions, various classes have been offered on board. [1] The World provides internet access in each residence.

Setting sail from Nome, Alaska, U.S. on 18 August 2012 and reaching Nuuk, Greenland on 12 September 2012, the ship became the largest passenger vessel at the time to transit the Northwest Passage. [3] [4] The ship, carrying 481 passengers and crew, for 26 days and 4,800 nautical miles (8,900 km) at sea, followed in the path of Captain Roald Amundsen, the first sailor to complete the journey in 1906. [5] In 2019, the ship traversed the Passage from east to west, becoming the 300th vessel to make the voyage, and the largest to do so in both directions.

The Northwest Passage (NWP) is the sea route to the Pacific Ocean through the Arctic Ocean, along the northern coast of North America via waterways through the Canadian Arctic Archipelago. The eastern route along the Arctic coasts of Norway and Siberia is accordingly called the Northeast Passage (NEP).

A cruise ship is a large passenger ship used for oceans voyages in which the voyage itself, the ship's amenities, and usually the different destinations along the way each form part of the passengers' experience. Transportation from one port or another is usually not the main purpose of the voyage. The act of "cruising," particularly on voyages that return passengers to their originating port are sometimes known as "closed-loop" cruises. On "cruises to nowhere" or "nowhere voyages", cruise ships make two- to three-night round trips without visiting any ports of call.

MS Mikhail Lermontov was an ocean liner owned by the Soviet Union's Baltic Shipping Company, built in 1972 by V.E.B. Mathias-Thesen Werft, Wismar, East Germany. It was later converted into a cruise ship. On 16 February 1986 she collided with rocks near Port Gore in the Marlborough Sounds, New Zealand, and sank, claiming the life of one of her crew members. 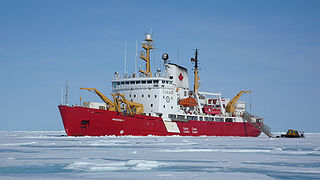 CCGS Amundsen is a Pierre Radisson-class icebreaker and Arctic research vessel operated by the Canadian Coast Guard. The vessel entered service in 1979 as Franklin and was renamed Sir John Franklin in 1980 and served as such until 1996. Declared surplus, the vessel was used as an accommodation ship in Labrador in 1996 and placed in reserve in 2000. In 2003, the ship was reactivated and underwent conversion to an Arctic research vessel. The ship recommissioned as Amundsen. 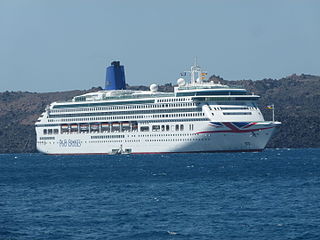 MV Aurora is a cruise ship of the P&O Cruises fleet. The ship was built by Meyer Werft at their shipyard in Papenburg, Germany. At over 76,000 tonnes, Aurora is the smallest and oldest of six ships currently in service with P&O Cruises. She officially entered service with the company in April 2000 and was named by Anne, Princess Royal in Southampton, United Kingdom. Aurora was refitted in 2014, during which the ship is the first of P&O's ships to receive an updated British Union flag design on her bow and her funnel repainted from yellow to blue. 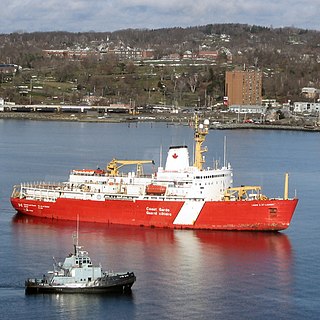 Iqaluit Airport serves Iqaluit, Nunavut, Canada and is located adjacent to the city. It is operated by the government of Nunavut. It hosts scheduled passenger service from Ottawa, Montreal, Rankin Inlet, and Kuujjuaq on carriers such as Canadian North, and from smaller communities throughout eastern Nunavut. It is also used as a forward operating base by the CF-18 Hornet. In 2011, the terminal handled more than 120,000 passengers.

MS Freedom of the Seas is a cruise ship operated by Royal Caribbean International. She is the namesake of Royal Caribbean's Freedom class, and can accommodate 3,634 passengers and 1,300 crew on fifteen passenger decks. The vessel also has 4 crew decks below the waterline. Freedom of the Seas was the largest passenger ship ever built from 2006 until construction of her sister ship, Liberty of the Seas in 2007. As of November 2018, she is the 15th largest passenger ship in the world by gross tonnage, at 155,889 GT.

Serenade of the Seas is a Radiance class cruise ship in the Royal Caribbean International fleet. She was completed in 2003.

There are no official or agreed upon definitions for superyacht or megayacht, but these terms are regularly used to describe large, luxurious, professionally crewed motor or sailing yacht, ranging from 40 metres (130 ft) to more than 180 metres (590 ft) in length and sometimes include yachts as small as 24 metres (79 ft).

Crystal Serenity is a cruise ship owned by Crystal Cruises. Crystal Serenity was built in 2003 by STX Europe in St. Nazaire. She operates together with her older fleetmate, Crystal Symphony, offering around the world voyages. 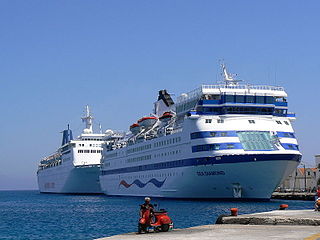 MS Sea Diamond was a cruise ship operated by Louis Hellenic Cruise Lines. She was built in 1984 by Valmet, Finland for Birka Line as Birka Princess. The ship sank on 5 April 2007, after running aground near the Greek island of Santorini the previous day, leaving two passengers missing and presumed dead.

CCGS John A. Macdonald was a Canadian Coast Guard heavy icebreaker. She was named after The Right Honourable, Sir John Alexander Macdonald, the first Prime Minister of Canada. The ship was commissioned into the Canadian Department of Transport's Marine Service in 1960 using the prefix "Canadian Government Ship" (CGS). The vessel was transferred in 1962 into the newly created Canadian Coast Guard (CCG) and served with distinction until being decommissioned in 1991, and replaced by the then-chartered CCGS Terry Fox.

MS MSC Orchestra is a cruise ship that was built in 2007 for MSC Cruises. She is the second ship of the Musica class. She could at the time accommodate 2,550 passengers in 1,275 cabins. Most inside cabins were later refitted with two bunk beds and therefore she can now accommodate 3,200 passengers. Her crew complement is approximately 990.

MV Sea Adventurer is an ice-capable expedition cruise ship operating commercial voyages to both polar regions, with Quark Expeditions of Norwalk, CT, USA. The vessel was renamed on 1 October 2012, having previously been registered as "Clipper Adventurer". She is the sister ship to the MV Lyubov Orlova. Built in 1975 in the former Yugoslavia as Alla Tarasova, she underwent a $13 million refit in 1998. 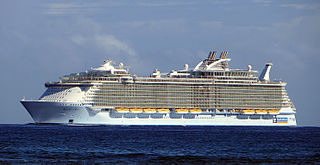 Allure of the Seas is an Oasis-class cruise ship owned and operated by Royal Caribbean International. As of 2018, the Oasis class ships were the largest passenger vessels ever in service, and Allure is 50 millimetres (2.0 in) longer than her sister ship Oasis of the Seas, though both were built to the same specifications. Designed under the name "Project Genesis", she was ordered from Aker Finnyards in February 2006 and her construction began at the Perno shipyard, Turku, Finland, in February 2008. She was named in May 2008 after a contest was held to name her and her sister. The keel of Allure of the Seas was laid on 2 December 2008, shortly after the shipyard had been acquired by STX Europe.

Victory I is a small cruise ship, carrying about 200 passengers. First launched in 2001, she has been operated by four different owners, and was formerly known as Saint Laurent, Sea Voyager and Cape May Light, the ship was built in the United States and entered service in 2001.

The Pierre Raidsson-class icebreakers, also known as R-class icebreakers, are a class of four icebreakers constructed for and operated by the Canadian Coast Guard. The Canadian Coast Guard designates the four ships in the class as medium icebreakers. Built in two phases, the first three ships, Pierre Radisson, Franklin and Des Groseilliers, were built to a common design. The fourth, Henry Larsen was built to a modified design and is considered a subclass, the Improved R-class icebreaker. Franklin was later renamed Sir John Franklin before undergoing a re-design for use primarily as an Arctic research vessel. Upon the vessel's return to service, the ship was once again renamed Amundsen. All the vessels are named for people who sailed through Canada's northern waters. The class operates in the Arctic Ocean in the summer, patrolling, icebreaking and research missions.