The Winnipeg Blue Bombers are a professional Canadian football team based in Winnipeg, Manitoba and the current Grey Cup champions. The Blue Bombers compete in the Canadian Football League (CFL) as a member club of the league's West division. They play their home games at IG Field after many years of playing at the now demolished Canad Inns Stadium.

Winnipegosis is an unincorporated urban community in the Rural Municipality of Mossey River, Manitoba, Canada. It lies at the mouth of the Mossey River on Lake Winnipegosis, and had a population of 647 in 2011.

The New England League was a mid-level league in American minor league baseball that played intermittently in five of the six New England states between 1886 and 1949. After 1901, it existed in the shadow of two Major League Baseball clubs in Boston and alongside stronger, higher-classification leagues.

Beechworth Football & Netball Club, nicknamed the Bushrangers, is an Australian rules football and netball club based in Beechworth, Victoria. Its teams currently play in the Tallangatta & District Football League. 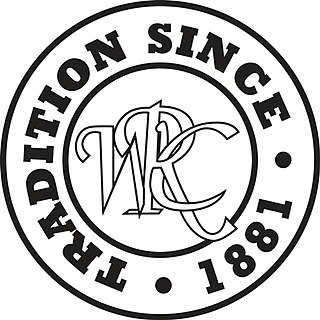 Winnipeg Rowing Club (WRC) is a rowing club on the Red River in downtown Winnipeg, Manitoba.

The 1906 Canadian football season was the 15th season of organized play since the Canadian Rugby Union (CRU) was founded in 1892 and the 24th season since the creation of the Ontario Rugby Football Union (ORFU) and the Quebec Rugby Football Union (QRFU) in 1883. The season concluded with the Hamilton Tigers defeating the McGill University Seniors in the 1906 Dominion Championship game.

The Winnipeg Tammany Tigers football team was a Canadian football team in Winnipeg, Manitoba that played in the Manitoba Rugby Football Union and Western Canada Rugby Football Union between 1913 and 1929. On May 14, 1930 the Tammany Tigers disbanded due to financial difficulties and a month later was reorganized as a new team: the Winnipegs. The team was part of the one of the most successful and popular sports clubs in the city, the Tammany Tigers Athletic Association, which also fielded championship lacrosse, baseball and ice hockey teams.

The Victoria Rugby Club, popularly known as the Winnipeg Victorias, was a Canadian football team in Winnipeg, Manitoba that played in the Manitoba Rugby Football Union and Western Canada Rugby Football Union between 1915 and 1935. The Winnipeg Victorias formed in the summer of 1915 when they took over the Winnipeg Rowing Club football team. The Victorias were a new team, as the Rowing Club continued to operate, naturally, as a rowing club. Prior the 1915 season the Victorias announced that they would not have a senior team, but did have teams at the intermediate, junior and juvenile levels. In 1924 they were first Winnipeg team to qualify for the Grey Cup. "An internal disagreement over which railway to use ended up costing the team the right to play. The Victorias chose to suspend operations rather than join the new Tri-City Football League. Concern over travel expenses was the reason."