The Hamilton Tigers ceased operations after one game, citing poor player turnout and a lack of ticket revenue. Consequently, Toronto Argonauts and Ottawa Rough Riders were the only two teams to play in the Ontario Rugby Football Union this season.

The 2007 Air New Zealand Cup was a provincial rugby union competition involving 14 teams from New Zealand. Matches started on Thursday 26 July 2007, and the Final, in which Auckland defeated Wellington, was held on Saturday 20 October. 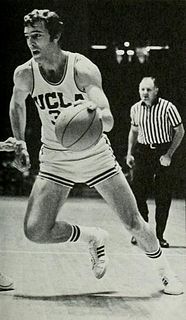 Steven John Patterson was an American professional basketball player and coach who played in the National Basketball Association (NBA) for five seasons. A 6'9" center for UCLA, Patterson spent his first year of athletic eligibility as the backup to Lew Alcindor, later Kareem Abdul-Jabbar. He then was the starting center for the Bruins' 1970 and 1971 championship teams under legendary coach John Wooden.

Joseph "Joby" Wright is an American former college and professional basketball player who was men's basketball head coach at Miami University and at the University of Wyoming.

Rugby sevens at the 2014 Commonwealth Games was the fifth time in the competition's history that the event took place. The tournament's preliminaries took place on 26 July, with the classification matches, quarterfinals, semifinals and medal matches the following day. The venue for the competition was Ibrox Stadium. South Africa beat the reigning champions New Zealand in the final on 27 July, beating their opponents 17-12. It was the first time that New Zealand had been beaten in any game since the inception of rugby sevens at the Commonwealth Games in 1998, ending their 30 match win streak and marking the first time any other nation had won the competition.