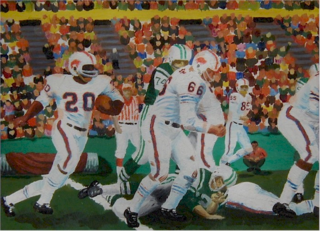 The first National Football League (NFL) was the first attempt at forming a national professional American football league in 1902. This league has no ties with the modern National Football League. In fact the league was only composed of teams from Pennsylvania, which meant it was actually regional, despite having locations in the two largest cities in Pennsylvania. Two of the teams were based in Philadelphia, while the third was based in Pittsburgh. This NFL was a curious mixture of football players and baseball players who adapted to playing football. Future Baseball Hall of Famer Rube Waddell was with the Philadelphia Athletics, and pitcher Christy Mathewson a fullback for Pittsburgh. Two of the three teams were owned by the Philadelphia Phillies and Philadelphia Athletics, with the third team suspected of being owned by the Pittsburgh Pirates. The league folded after the 1902 season.

Walter LeJeune Jean was a professional football player from Chillicothe, Ohio. Jean was born and began his pro career as Walter LeJeune.

The Kitchener-Waterloo Dutchmen were a Canadian football team based in Kitchener, Ontario and a member of the Ontario Rugby Football Union, a league that preceded the Canadian Football League. Other teams included the London Lords, Sarnia Imperials, Toronto Balmy Beach and Hamilton Wildcats. The Dutchmen played in the ORFU from 1953 to 1959, winning four consecutive ORFU titles from 1954 to 1957, with quarterback Bob Celeri and coach Harvey Johnson. The Dutchmen were the last ORFU team to have competed for the Grey Cup, losing to the Edmonton Eskimos in a semi-final game in 1954. The following year, ORFU teams would discontinue competing for the national championship title after it became apparent that the ORFU could no longer be competitive in those games. The Dutchmen ceased operations after the 1959 season, just one year before senior play in the ORFU would be discontinued.

The Peterborough Pets were a Canadian football franchise in the early 20th century. They played in the Ontario Rugby Football Union. Their greatest success came in 1907 when they won the ORFU title and advanced to the Canadian Dominion Final. They were soundly defeated 75-10 by the Montreal Football Club in the final that year.

The 1907 Dominion Championship was a Canadian football game that was played on November 30, 1907 at McGill University in Montreal, Quebec that determined the Senior Rugby Football champion of Canada for the 1907 season. This was the first championship game to feature the newly-created Interprovincial Rugby Football Union (IRFU) champion, which was the Montreal Football Club. Montreal defeated the Ontario Rugby Football Union (ORFU) champion Peterborough Club in a 71–10 blowout victory to win their second Canadian Championship. This was the eighth appearance in the title game for Montreal and the first and only appearance for Peterborough. Notably, referee Russell Britton admitted after the game that there was a scoring error when a touch-in-goal was given to Montreal when it should have counted as a try. While the score should have been 75–10, it was officially recorded as 71–10. This was the highest scoring Dominion championship/Grey Cup in Canadian football history.