The St. Hyacinthe-Donnacona Navy defeated the Hamilton Flying Wildcats 7 to 6.

The Hamilton Flying Wildcats were trying to defend their championship, but the St. Hyacinthe-Donnacona Navy team finished off a Cinderella season by returning the Grey Cup back to Montreal for the first time since 1931. 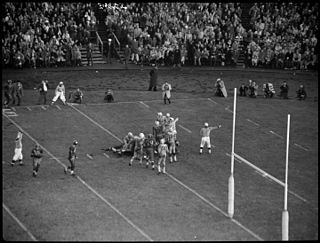 The 46th Grey Cup was the championship game of the 1958 season of the Canadian Football League on November 29, 1958. The game was played in Vancouver's Empire Stadium before a crowd of 36,567. The Winnipeg Blue Bombers defeated the Hamilton Tiger-Cats 35-28. This was the first Grey Cup game to be played under the aegis of the newly formed Canadian Football League.

The 45th Grey Cup was the Canadian Football Council's (CFC) championship game of the 1957 season, which was played on November 30, 1957. The Hamilton Tiger-Cats defeated the Winnipeg Blue Bombers 32–7 at Varsity Stadium in Toronto.

The 49th Grey Cup was the Canadian Football League's championship game of the 1961 season on December 2, 1961. The Winnipeg Blue Bombers defeated the Hamilton Tiger-Cats 21 to 14 at CNE Stadium in Toronto before 32,651 fans. It is considered to be one of the 10 greatest Grey Cup Games of all time.

The Hamilton Wildcats were a Canadian football team based in Hamilton, Ontario that played in the Ontario Rugby Football Union (ORFU) from 1941 to 1947, and in the Interprovincial Rugby Football Union (IRFU) from 1948 to 1949. The team was formed to play in the ORFU in 1941 to fill the void left by the Hamilton Tigers, who ceased operations that year due to many players joining the army. In 1943 and 1944, the team assumed the name Hamilton Flying Wildcats to reflect the Royal Canadian Air Force personnel on the team. After struggling to compete on a sound financial level with the Hamilton Tigers, who resumed operations following World War II, the two clubs merged in 1950 to form the Hamilton Tiger-Cats.