The 10th Grey Cup was played on December 2, 1922, before 4,700 fans at Richardson Memorial Stadium at Kingston.

The match was refereed by Silver Quilty. [1] 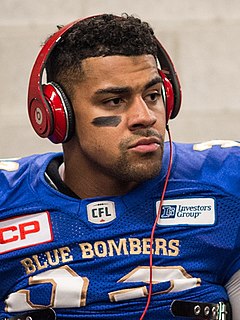 Andrew Harris is a Canadian professional Canadian football running back for the Winnipeg Blue Bombers of the Canadian Football League (CFL). Harris is a two-time Grey Cup champion and was named the Most Valuable Canadian of the 99th Grey Cup following a BC Lions' win, and won both the Grey Cup Most Valuable Player and Most Valuable Canadian in his Blue Bombers' 107th Grey Cup win. He is a five-time CFL All-Star and a six-time CFL West All-Star. He played for the Lions for six seasons before joining the Blue Bombers in 2016 as a free agent. As a Bomber, he was named the 2017 Most Outstanding Canadian after leading the league in rushing and setting an all-time record for single-season receptions by a running back, he is the CFL leader in career rushing yards by a Canadian. He played junior football for the Vancouver Island Raiders of the Canadian Junior Football League.

The 1933 Toronto Argonauts season was the club's 47th season since its inception in 1873 and its 24th season in the Interprovincial Rugby Football Union. The team finished tied with the Montreal Football Club for first place in the IRFU with an identical record of four wins and two losses, resulting in a two-game, total-points tiebreaker series which the Argos won by an aggregate score of 20-9. By virtue of this victory, the club secured its 7th IRFU championship and qualified for the playoffs for the first time since 1922. The ten-year drought was, and continues to be, the longest playoff drought in franchise history.