The ORFU withdrew from the CRFU and the governing body ceased to function. [1] The St.John's Rugby Football Club (St.John's) formed in October 1887. The St. John's team met the Winnipeg Football Club (Winnipegs) to determine the first ever Manitoba champions. After splitting the first two games, a third game was scheduled to determine the winner. The Winnipegs won by a goal and a try to nil. All games were scored using the challenge system which credited the team with the most goals as the winner. The games were unofficially scored using the points system used by the CRU in eastern Canada. Based on the points system, the Winnipegs won all three games. 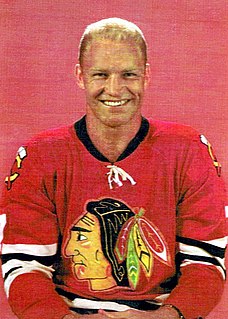 Robert Marvin Hull, OC is a Canadian former ice hockey player who is regarded as one of the greatest players of all time. His blonde hair, legendary skating speed, end-to-end rushes, and ability to shoot the puck at very high velocity together earned him the name "The Golden Jet". His talents were such that one or two opposing players were often assigned just to shadow him—a tribute to his explosiveness. 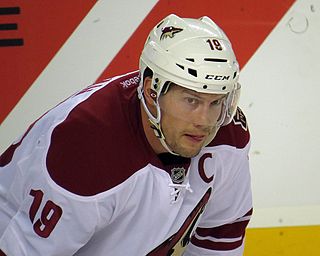 Shane Albert Doan is a Canadian former professional ice hockey forward who spent the entirety of his National Hockey League (NHL) career with the Winnipeg Jets/Arizona Coyotes franchise, playing 21 seasons. He was the last remaining player active in the NHL from the original Winnipeg Jets franchise. Doan retired from the NHL in the summer of 2017.

Ligue 2, also known as Ligue 2 BKT due to sponsorship by Domino's Pizza, is a French professional football league. The league serves as the second division of French football and is one of two divisions making up the Ligue de Football Professionnel (LFP), the other being Ligue 1, the country's top football division. Contested by 20 clubs, it operates on a system of promotion and relegation with both Ligue 1 and the third division Championnat National. Seasons run from August to May, with teams playing 38 games each totalling 380 games in the season. Most games are played on Fridays and Mondays, with a few games played during weekday and weekend evenings. Play is regularly suspended the last weekend before Christmas for two weeks before returning in the second week of January.

The 1981–82 NHL season was the 65th season of the National Hockey League. The William M. Jennings Trophy made its debut this year as the trophy for the goaltenders from the team with the fewest goals against, thus replacing the Vezina Trophy in that qualifying criteria. The Vezina Trophy would thereafter be awarded to the goaltender adjudged to be the best at his position. The New York Islanders won their third straight Stanley Cup by sweeping the Vancouver Canucks in four games.

The 1972 Memorial Cup occurred May 8–14 at the Ottawa Civic Centre in Ottawa, Ontario, Canada. It was the 54th annual Memorial Cup competition, organized by the Canadian Amateur Hockey Association (CAHA) to determine the champion of major junior A ice hockey. Participating teams were the winners of the Ontario Hockey Association, Quebec Major Junior Hockey League and Western Hockey League which were the Peterborough Petes, Cornwall Royals and Edmonton Oil Kings. Cornwall won their 1st Memorial Cup, defeating Peterborough in the final game. 1972 was the first year the Memorial Cup was contested as a round robin tournament between three teams.

The men's tournament in ice hockey at the 2010 Winter Olympics was held in Vancouver, British Columbia, Canada, from February 16–28, 2010. Games were hosted at two venues – Canada Hockey Place and UBC Thunderbird Arena. It was the fourth time since the 1998 Winter Olympics in Nagano that the National Hockey League allowed its players to compete. These Olympics were the first to take place in a city with an NHL team since then, which meant players on the Vancouver Canucks who were competing in the Olympics were playing in their home arena: Roberto Luongo for Canada, Ryan Kesler for the United States, Pavol Demitra for Slovakia, Sami Salo for Finland, Christian Ehrhoff for Germany, and Daniel and Henrik Sedin for Sweden.