Margaret Brennan (born March 26, 1980) is an American journalist based in Washington, D.C., the current moderator of Face the Nation on CBS News, and the network's senior foreign affairs correspondent. [2] [3] [4] Brennan was previously a White House correspondent for CBS and has covered Washington since 2012.

Prior to CBS, Brennan anchored the weekday show InBusiness with Margaret Brennan on Bloomberg Television. She was also a CNBC correspondent contributing to various NBC News programs.

She was born on March 26, 1980 in Stamford, Connecticut to Edward Brennan, a senior director at the Guardian Life Insurance Company of America in New York, and Jane Brennan, an elementary school art and art history teacher in the Pennsbury, PA school district. [5]

She graduated with honors from the Convent of the Sacred Heart in Greenwich, Connecticut in 1998. At the University of Virginia, she graduated with highest distinction in 2002 with a B.A. in Foreign Affairs and Middle East Studies with a minor in Arabic language. She was named an Emmerich-Wright scholar for her thesis and also studied abroad at Yarmouk University in Irbid, Jordan, on a Fulbright-Hays Grant.

In 2015, she received an honorary doctor of letters degree from Niagara University for her work in international affairs.

Brennan began her business news career in 2002 at CNBC as a producer for prominent financial journalist Louis Rukeyser. She wrote, researched and booked guests for the weekly Louis Rukeyser's Wall Street program and primetime specials. [6]

Brennan later worked as a producer on Street Signs with Ron Insana for which she coordinated guest bookings and produced interviews with former President George W. Bush and former Secretary of State Colin Powell. [7]

As a CNBC correspondent, she covered the financial crisis with a focus on consumer issues.

She conducted interviews with former Walmart CEO Lee Scott and Irish Prime Minister Brian Cowen. She broke the story of Circuit City's liquidation in 2009 and regularly covered changing consumer trends for the network. [8] [9]

"I think across the board, you can't separate the business stories from the international political stories any longer. Covering the global consumer, covering the global markets—all that is going to be a part of the canvas here."

Brennan left Bloomberg in 2012. [15] On April 27, 2012, she hosted her last show of InBusiness. No reason was given for her departure, other than the choice to pursue new opportunities. [16]

Brennan joined CBS News in July 2012. Since 2012, she was based in Washington and reported on the White House across the Obama and Trump administrations for CBS programs. [2] She substitute anchors on CBS This Morning and the CBS Evening News. Brennan was also part of the CBS News team honored with a 2012-2013 Alfred I. Dupont-Columbia Award for coverage of the Newtown tragedy.

Brennan's reporting has taken her to Tehran, Baghdad, Kabul, Beijing, and Havana. She has covered diplomatic negotiations including the nuclear deal with Iran, the chemical weapons deal in Syria, and the reopening of relations with Cuba. She conducted the first US interview with South Korean President Park Geun-Hye covering her hardline policy against North Korea. [17] The interview made headlines in Pyongyang and Seoul, where her etiquette was the topic of a morning show. [18] She was also among the first reporters to interview Hillary Clinton about the fatal attack on the US mission in Benghazi, Libya.

At a press conference on September 9, 2013, she asked Secretary of State John Kerry about any possibility for the Syrian government to avoid a U.S. strike. Kerry answered that Assad could "turn over every single bit of his chemical weapons to the international community in the next week" [19] —although later his answer was retracted as "a rhetorical argument about the impossibility and unlikelihood of Assad turning over chemical weapons he has denied using" by a State Department spokesperson—led Russia's foreign minister Sergey V. Lavrov to propose this as a solution to the crisis. [20]

On February 22, 2018, she was named the 10th moderator of Face the Nation , the network's Sunday morning political interview show, becoming only the second woman to moderate the program. [21]

Brennan received the Fulbright Award for international understanding in 2010.

NBC News is the news division of the American broadcast television network NBC. The division operates under NBCUniversal Broadcast, Cable, Sports and News, a subsidiary of NBCUniversal, which is in turn a subsidiary of Comcast. The group's various operations report to the president of NBC News, Noah Oppenheim.

Katherine Anne Couric is an American television personality, journalist, and author. From 2013 to 2017, she was Yahoo's Global News Anchor. Couric has been a television host on all Big Three television networks in the United States, and in her early career she was an Assignment Editor for CNN. She worked for NBC News from 1989 to 2006, CBS News from 2006 to 2011, and ABC News from 2011 to 2014.

Face the Nation is a weekly American news and morning public affairs program airing Sundays on the CBS radio and television network. Created by Frank Stanton in 1954, Face the Nation is one of the longest-running news programs in the history of television.

Judy Carline Woodruff is a U.S. broadcast journalist, who has worked in network, cable, and public television news since 1976. She is currently anchor and managing editor of the PBS NewsHour. Woodruff has covered every presidential election and convention since 1976. She has interviewed several heads of state and moderated U.S. presidential debates.

Bob Lloyd Schieffer is an American television journalist. He is known for his moderation of presidential debates, where he has been praised for his capability. Schieffer is one of the few journalists to have covered all four of the major Washington national assignments: the White House, the Pentagon, United States Department of State, and United States Congress. His career with CBS has almost exclusively dealt with national politics. He has interviewed every United States President since Richard Nixon, as well as most of those who sought the office. 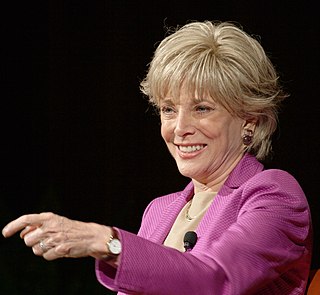 Alexis Christoforous is a New York-based correspondent for Yahoo! Finance. Previously she worked for CBS news where her reports have been seen on CBS' "The Early Show", "CBS Evening News Weekend", "CBS Sunday Morning with Charles Osgood" "CBS Up to the Minute", "CBS This Morning" as well as over 200 local CBS affiliate stations internationally. Her reports were also heard on the CBS Radio Network and WCBS Newsradio 880. 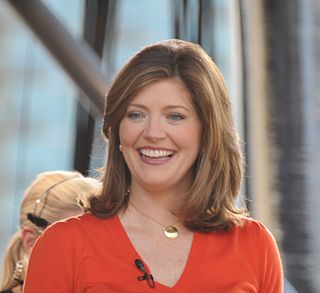 Norah Morahan O’Donnell is an American television journalist and anchor of the CBS Evening News and is a correspondent for 60 Minutes. She is the former co-anchor of CBS This Morning, Chief White House Correspondent for CBS News, and a substitute host for CBS's Sunday morning show Face the Nation.

Rebecca Ann Jarvis is an American journalist. She is the Chief Business, Economics and Technology Correspondent for ABC News and the host, creator and managing editor of Real Biz with Rebecca Jarvis and the podcast No Limits with Rebecca Jarvis. She was a finalist on Season 4 of The Apprentice.

Michelle Miller is a national correspondent for CBS News and currently serves as a co-host on the Saturday edition of CBS This Morning. She has also served as a substitute anchor on "The CBS Evening News" Weekend Editions and CBS News Up to the Minute.

Nicole Lapin is an American television news anchor, author and businesswoman. She is known for being an American news anchor on CNBC, CNN and Bloomberg. Lapin also served as a finance correspondent for Morning Joe on MSNBC and The Today Show on NBC. She is The New York Times bestselling author of Rich Bitch and Boss Bitch. In September 2019 she released Becoming Super Woman, a 12-step plan to go from burnout to balance.

Tricia Ann Regan, known professionally as Trish Regan, is an American television talkshow host and author. She hosts Trish Regan Primetime on the Fox Business Network. She is also a contributor on Fox News Channel. Regan was a TV host on Bloomberg Television from 2012–15, and a host at CNBC from 2007–12.

Elaine Cagas Quijano is an American television reporter. Formerly with CNN, she is now a correspondent and anchor with CBS News. 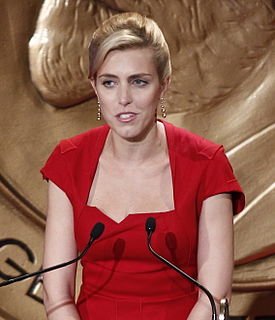 Clarissa Ward is an American television journalist who is currently chief international correspondent for CNN. She was formerly with CBS News, based in London. Before her CBS News position, Ward was a Moscow-based news correspondent for ABC News programs.

New York City has been called the media capital of the world. An integral component of this status is the significant array of journalists who report about international, American, and New York metropolitan area-related matters from Manhattan.