Mary Lattimore (born 1980) [1] is an American classically trained harpist based in Los Angeles, California. In addition to her solo work and collaborations with fellow Philadelphia musician Jeff Zeigler, she has performed with prominent indie musicians including Thurston Moore, Kurt Vile, and Steve Gunn. [2] [3]

Originally from Asheville, North Carolina, [4] Lattimore was raised in western North Carolina. [5] Her mother was also a harpist, and so Mary learned to play the harp when she was 11 years old. She was not very interested in it at first, but this began to change as she got better at it. [6] She studied at the Eastman School of Music where she worked on the college radio. [7]

One of Lattimore's first musical activities was her contribution to the Valerie Project, which released its self-titled debut album in 2007. This album was intended to be an alternative soundtrack to the film Valerie and Her Week of Wonders . [4]

Lattimore released her first solo effort in 2012, a self-titled cassette, on Fred Thomas' Life Like imprint. The following year, this album was re-released by Desire Path Recordings [8] as The Withdrawing Room. [4]

In 2014, Lattimore and Zeigler released Slant of Light on Thrill Jockey. [2]

Also that year, Lattimore received a Pew Fellowship grant, which she used to travel around California and Texas; while doing so, she recorded the album At the Dam, which was released on Ghostly International in 2016. [5] The album's title was taken from an essay about the Hoover Dam in Joan Didion's 1979 book The White Album . [9]

Joanna Newsom is an American singer-songwriter and actress. Born and raised in Northern California, Newsom was classically trained on the harp in her youth, and began her musical career as a keyboardist in the San Francisco–based indie band the Pleased.

Chanté Torrane Moore is an American singer-songwriter, actress, television personality, and author. Rising to fame in the early 1990s, Moore established herself as an R&B singer.

Marissa Nadler is an American musician and fine artist. Active since 2000, she is currently signed to Sacred Bones Records and Bella Union, and released her ninth full-length studio album, The Path of the Clouds, in October 2021. As a singer-songwriter, her music has been characterized as blending "traditional folk, Gothic Americana, and dreamy pop into an original musical framework". Her music "is rooted in old-school country and folk but brings in elements of experimental and black metal". Sometimes the term "dream folk" has been invoked to describe her work. 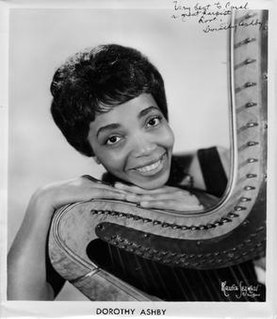 Dorothy Jeanne Thompson, better known as Dorothy Ashby, was an American jazz harpist and composer. Hailed as one of the most "unjustly under loved jazz greats of the 1950s" and the "most accomplished modern jazz harpist," Ashby established the harp as an improvising jazz instrument, beyond earlier use as a novelty or background orchestral instrument, proving the harp could play bebop as adeptly as the instruments commonly associated with jazz, such as the saxophone or piano. 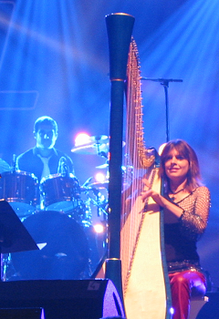 Catrin Ana Finch is a Welsh harpist, arranger and composer. She was the Official Harpist to the Prince of Wales from 2000 to 2004 and is Visiting Professor at the Royal Welsh College of Music & Drama and the Royal Academy of Music in London. Finch has given recitals at venues throughout the world.

Osian Gwynn Ellis was a Welsh harpist, composer and teacher. He was principal harpist of the London Symphony Orchestra, a founding member of the Melos Ensemble, and a harp teacher at the Royal Academy of Music. Many composers wrote music for him. From 1959 onwards, Ellis had a close professional partnership with Benjamin Britten that lasted to the latter's death. He often first performed and recorded Britten's works.

Ralph Lee "Mac" McCaughan is an American musician and record label owner, based in North Carolina. His main musical projects have been Superchunk since 1989 and Portastatic since the early 1990s. In 1989 he founded the independent record label Merge Records with Superchunk bandmate Laura Ballance.

Pearl Chertok was an internationally regarded harpist and composer for harp.

Lavinia Meijer is a South Korean-born Dutch harpist. Her concerts have included a solo harp evening at Carnegie Hall in New York City.

Meg Baird is an American musician based in San Francisco, California, United States, who, in addition to her solo career, is known as a founding member, lead vocalist, and drummer for Heron Oblivion, along with members from Assemble Head in Sunburst Sound and Comets on Fire. She was also a guitarist and the lead female vocalist in Philadelphia psychedelic folk rock band Espers, and played drums in Philadelphia punk band Watery Love. Baird frequently collaborates with the Los Angeles-based harpist Mary Lattimore.

Anna Maria Mendieta is a professional harpist from the United States best known for pioneering the harp as a contemporary tango instrument and is the founder, artistic director, and harpist of the award-winning album and an internationally touring show of the same name, Tango del Cielo.

Steve Gunn is an American singer-songwriter based in Brooklyn. He studied art and music at Temple University before moving to New York City. Gunn was formerly a guitarist in Kurt Vile's backing band, The Violators.

Susan Allen was an American harpist and music educator. She was particularly known for her world premieres of music for both the classical and electric harp by contemporary composers. She performed in a variety genres—classical, experimental music, jazz, and world music. For many years Allen was also Associate Dean of the Herb Alpert School of Music at California Institute of the Arts.

Ghostly Swim 2 is a free digital download album released digitally in late 2014 by Adult Swim and Ghostly International and a CD version was released by Ghostly in April 2015. The track listing contains songs arranged and recorded in varying avant-garde styles of genres including ambient, house and techno. The album is a sequel to the two labels' previous collaborative album in 2008, Ghostly Swim.

Jeff Zeigler is a musician, record producer, and sound engineer from Philadelphia, Pennsylvania. His Philadelphia recording studio, Uniform Recording, has recorded albums by Kurt Vile, A Sunny Day in Glasgow, The War on Drugs, and many other artists. He has also been a member of multiple bands, including Arc in Round. He has often collaborated with fellow Philadelphia musician Mary Lattimore. His production credits include Allison Crutchfield's 2017 solo debut album Tourist in This Town. In 2016, he started his own record label, Soft Dystopia. Also that year, he released the first self-titled album by his project Valley Exit, whose other members include Josh Meakim, April Harkanson (Myrrias), and Steven Urgo. 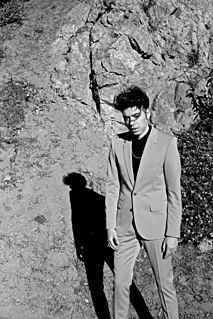 Hundreds of Days is the second studio album by American harpist Mary Lattimore. It was released on May 18, 2018 under Ghostly International.

Maeve Gilchrist is a Scottish harpist and composer currently living in New York City. She is known for combining traditional folk music, jazz, improvisation, and experimentation.

Valerie Vonpechy Whitcup is an American composer, harpist, and educator.

Silver Ladders is the fourth studio album by American harpist Mary Lattimore. It was released on October 9, 2020 under the Ghostly International label. Produced by Slowdive's Neil Halstead, it has been described as the album where Lattimore "sets herself apart as a bright innovator who pushes expectation."