Ghostly International was founded in Ann Arbor, Michigan by Sam Valenti IV in 1999. [1] He grew up in suburban Detroit, where, having become a fan of underground music culture, he would sneak into hip-hop clubs by carrying records for his Detroit DJ hero Houseshoes. Valenti later became a DJ himself, taking the name DJ SpaceGhost; [2] this theme is echoed by the name and logo of Ghostly International.

Valenti met Matthew Dear at a house party that Valenti attended during his first week at the University of Michigan in Ann Arbor. Their shared affection for electronic music, particularly the sound of Detroit techno, led to the label's (and Dear’s) first 12 inch single, "Hands Up For Detroit." Following this, Ghostly enjoyed early success with albums by Mullinix as well as Disco Nouveau , a compilation including artists such as ADULT., Solvent, Legowelt, Daniel Wang and DMX Krew, inspired by the Italo disco movement of the 1970s and 1980s.

The label has since widened its focus to include groups such as Skeletons & The Girl-Faced Boys and Mobius Band, whose rock-based sound meshes with the label's eccentric leanings. Also known for forward-thinking package design by the likes of Will Calcutt and Deanne Cheuk, as well as the Boy, Cat, and Bird logos of Michael Segal, Ghostly International aims to be a complete aesthetic experience.

Ghostly International also runs a companion label, Spectral Sound, dedicated to more dancefloor-oriented music coming from some of the same artists on Ghostly (such as James T. Cotton, another moniker of Tadd Mullinix, aka Dabrye).

Ghostly International and Adult Swim released a compilation album known as Ghostly Swim , [3] available on Adult Swim's website for free. It was released with a bonus track on January 27, 2009 as a limited edition CD. A sequel to Ghostly Swim, Ghostly Swim 2 , was released digitally on December 23, 2014, and on CD on April 28, 2015.

The label has also been involved in the soundtracks for video games. In 2014, Ghostly released a compilation album of new and previously recorded work by Ghostly artists to act as the soundtrack to the video game Hohokum . [4] A year later, the first soundtrack to critically acclaimed videogame Minecraft by German musician C418 was released by Ghostly as a vinyl LP on August 21, 2015, four years after its original digital release by C418. [5] [6]

Spectral Sound is a record label that was originally an offshoot of the more cerebral Ghostly International, but has since gained similar notoriety thanks to successful records by Matthew Dear and other techno producers. The label began in 2000 to fulfill the more dancefloor-oriented interests of founder Samuel Valenti IV, and early singles included artists like Kenneth Graham, Osborne and James T. Cotton. 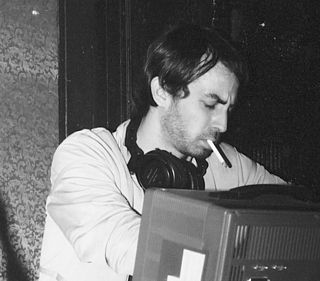 Tadd Mullinix or Dabrye is an American musician from Ann Arbor, Michigan, United States, also known by the aliases James T. Cotton and SK-1. During his adolescent years, he grew up in Troy, MI. His Winking Makes a Face was the first album released by Ann Arbor's Ghostly International. Parting with the IDM sound of Winking..., the first Dabrye album was 2001's One/Three, whose take on instrumental hip-hop paralleled the work of artists such as Prefuse 73. His early influences are White Zombie and 7 Seconds. His first band in high school was Battery 3, a shoegazing takeoff of the band Spacemen 3. 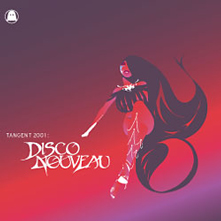 Disco Nouveau is the first compilation album of Ann Arbor, Michigan record label Ghostly International. Released in 2002, the album served as a modern update of Giorgio Moroder's famed Italo disco sound of the 1970s and 1980s and includes contributions from artists such as Solvent, ADULT., and Susumu Yokota. It served as a major inspiration to the burgeoning electroclash movement and has been praised for its persistent relevance in much the same way as Moroder himself.

I-f is the stage name of Ferenc E. van der Sluijs, a Dutch producer and DJ based in The Hague. He is a former member of the Dutch techno-pioneers Unit Moebius.

!K7 Music is an independent record label and music company based in Berlin, Germany that focuses mostly on electronic music. The name is an abbreviation of the company's original Berlin address, Kaiserdamm 7. !K7 has since opened branch offices in New York City and London. The company now operates an artist management division, managing a roster of artists including the British musician Tricky. !K7 Music also runs a successful Label Services and Synch and Licensing department.

Solvent is the stage name used by electronic producer and remixer Jason Amm. Although his music has been included in the electroclash movement, many of Solvent's tracks fall under the intelligent dance music or electropop genres. Jason Amm's music is often associated with its strong influence from early 1980s artists such as Soft Cell and Depeche Mode, but the influence is much wider, spanning the last three decades. 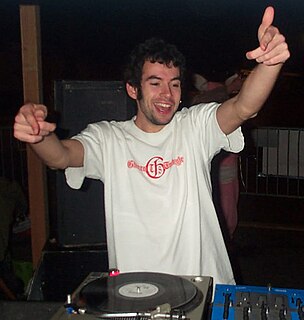 Two/Three is Tadd Mullinix's second studio album under the Dabrye name. It was released by the Ghostly International label on June 13, 2006, around five years after its predecessor One/Three.

Williams Street Records, LLC is an American independent record company found by Jason DeMarco, based in Atlanta, Georgia. It is a joint venture of Cartoon Network's Williams Street Productions and Warner Music Group, and is distributed through Alternative Distribution Alliance. Under that label, they have released original works of music, some of which are related to their shows on Adult Swim. The label is managed by Chris Hartley, and the A&R is Jason DeMarco.

Ella Riot was a musical group based in Ann Arbor, Michigan. Founded in 2007 by Tyler Duncan as My Dear Disco, the name change came in March 2011.

Mux Mool is an American electronic musician, producer, and visual artist affiliated with the labels Moodgadget, Ghostly International, and Super Best Records. He has been featured on Cartoon Network's Adult Swim, and is a member of Club Scouts, a musical partnership with Michal Menert. He currently resides in Denver, Colorado.

Ghostly Swim is a free digital download album released in 2008 by Adult Swim and Ghostly International. The track listing contains songs arranged and recorded in an unusual avant-garde style of pop, rock and hip hop. A sequel album, Ghostly Swim 2, was released in 2014.

The soundtrack of the 2009 Mojang video game Minecraft was primarily composed by German musician Daniel Rosenfeld, better known as C418. Later on in the game's history, Lena Raine composed 4 tracks for the game. The game's soundtrack is mostly instrumental ambient music. It has been praised by critics; in 2011, the video game blog Kotaku chose the soundtrack as one of the best video game soundtracks of that year. Minecraft's soundtrack was released across two soundtrack albums, Minecraft – Volume Alpha (2011), and Minecraft – Volume Beta (2013). Both albums include music featured in the game, as well as other music included in trailers, and instrumentals that were not included in the game's final release. In 2015, Rosenfeld hinted at a potential upcoming third album for Minecraft's soundtrack. In 2017, Rosenfeld confirmed the future release, claiming the album "is still far from done".

Hohokum is a 2014 art video game developed by Honeyslug and published by Sony Computer Entertainment for PlayStation 3, PlayStation 4, and PlayStation Vita. The player controls a snakelike creature to explore 17 whimsical worlds with no set objectives. The developers, who began development in 2008, compared the concept to flying a kite and were inspired by free London museums, Portmeirion, and indigenous cultures. It was released on August 12, 2014, and features a soundtrack by Ghostly International artists. The game received "generally favorable reviews", according to video game review score aggregator Metacritic. Critics appreciated the game's presentation, including its art and music, but felt that the gameplay turned to drudgery towards its end and that the objectives were too vague.

Adrian Yin Michna is an American DJ and music producer, performing under the mononym Michna. He is currently based in Brooklyn and is signed to Ghostly International.

Michael Greene aka Fort Romeau is an electronic music producer and DJ from the United Kingdom.

Three/Three is the third studio album by American musician Tadd Mullinix, under the name Dabrye. It was released in February 2018 under Ghostly International.