The MAA was founded in 1915 and is headquartered at 1529 18th Street, Northwest in the Dupont Circle neighborhood of Washington, D.C. The organization publishes mathematics journals and books, including the American Mathematical Monthly (established in 1894 by Benjamin Finkel), the most widely read mathematics journal in the world according to records on JSTOR. [1]

The mission of the MAA is to advance the understanding of mathematics and its impact on our world.

We envision a society that values the power and beauty of mathematics and fully realizes its potential to promote human flourishing.

The MAA sponsors the annual summer MathFest and cosponsors with the American Mathematical Society the Joint Mathematics Meeting, held in early January of each year. On occasion the Society for Industrial and Applied Mathematics joins in these meetings. Twenty-nine regional sections also hold regular meetings.

The association publishes multiple journals in partnership with Taylor & Francis: [2]

MAA FOCUS is the association member newsletter. The Association publishes an online resource, Mathematical Sciences Digital Library (Math DL). The service launched in 2001 with the online-only Journal of Online Mathematics and its Applications (JOMA) and a set of classroom tools, Digital Classroom Resources. These were followed in 2004 by Convergence, an online-only history magazine, and in 2005 by MAA Reviews, an online book review service, and Classroom Capsules and Notes, a set of classroom notes. [3]

The MAA sponsors numerous competitions for students, including the William Lowell Putnam Competition for undergraduate students, the online competition series, and the American Mathematics Competitions (AMC) for middle- and high-school students. This series of competitions is as follows:

Through this program, outstanding students are identified and invited to participate in the Mathematical Olympiad Program. Ultimately, six high school students are chosen to represent the U.S. at the International Mathematics Olympiad.

The MAA is composed of the following twenty-nine regional sections:

There are seventeen Special Interest Groups of the Mathematical Association of America (SIGMAAs). These SIGMAAs were established to advance the MAA mission by supporting groups with a common mathematical interest, and facilitating interaction between such groups and the greater mathematics community. [4]

The MAA is one of four partners in the Joint Policy Board for Mathematics (JPBM, http://www.jpbm.org/index.html), and participates in the Conference Board of the Mathematical Sciences (CBMS, http://www.cbmsweb.org/), an umbrella organization of sixteen professional societies.

A detailed history of the first fifty years of the MAA appears in May (1972). A report on activities prior to World War II appears in Bennet (1967) harvtxt error: no target: CITEREFBennet1967 (help). Further details of its history can be found in Case (1996). In addition numerous regional sections of the MAA have published accounts of their local history. The MAA was established in 1915. But the roots of the Association can be traced to the 1894 founding of the American Mathematical Monthly by Benjamin Finkel, who wrote "Most of our existing journals deal almost exclusively with subjects beyond the reach of the average student or teacher of mathematics or at least with subjects with which they are familiar, and little, if any, space, is devoted to the solution of problems…No pains will be spared on the part of the Editors to make this the most interesting and most popular journal published in America."

The MAA has for a long time followed a strict policy of inclusiveness and non-discrimination.

In previous periods it was subject to the same problems of discrimination that were widespread across the United States. One notorious incident at a south-eastern sectional meeting in Nashville in 1951 has been documented [12] by the American mathematician and equal rights activist Lee Lorch, who in 2007 received the most prestigious award given by the MAA (the Yueh-Gin Gung and Dr. Charles Y. Hu Award for Distinguished Service to Mathematics). [13] [14] The citation delivered at the 2007 MAA awards presentation, where Lorch received a standing ovation, recorded that:

"Lee Lorch, the chair of the mathematics department at Fisk University, and three Black colleagues, Evelyn Boyd (now Granville), Walter Brown, and H. M. Holloway came to the meeting and were able to attend the scientific sessions. However, the organizer for the closing banquet refused to honor the reservations of these four mathematicians. (Letters in Science, August 10, 1951, pp. 161–162 spell out the details). Lorch and his colleagues wrote to the governing bodies of the AMS and MAA seeking bylaws against discrimination. Bylaws were not changed, but non-discriminatory policies were established and have been strictly observed since then."

The Carriage House would have been used by the owners as a livery stable to house the family carriage, though little else is known about its history today. There are huge doors that were once used as an entrance for horses and carriages. Iron rings used to tie up horses can still be seen on an adjacent building. The Carriage House would have perhaps also been used as living quarters for a coachman, as was typical for the time period. 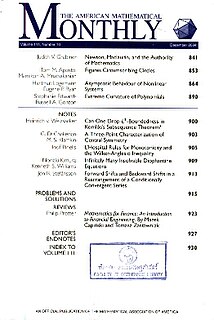 Carl Barnett Allendoerfer was an American mathematician in the mid-twentieth century, known for his work in topology and mathematics education.

Mathematics Magazine is a refereed bimonthly publication of the Mathematical Association of America. Its intended audience is teachers of collegiate mathematics, especially at the junior/senior level, and their students. It is explicitly a journal of mathematics rather than pedagogy. Rather than articles in the terse "theorem-proof" style of research journals, it seeks articles which provide a context for the mathematics they deliver, with examples, applications, illustrations, and historical background. Paid circulation in 2008 was 9,500 and total circulation was 10,000.

Steven Henry Strogatz, born August 13, 1959, is an American mathematician and the Jacob Gould Schurman Professor of Applied Mathematics at Cornell University. He is known for his work on nonlinear systems, including contributions to the study of synchronization in dynamical systems, and for his research in a variety of areas of applied mathematics, including mathematical biology and complex network theory.

Evelyn Boyd Granville was the second African-American woman to receive a Ph.D. in mathematics from an American university; she earned it in 1949 from Yale University. She graduated from Smith College in 1945. She performed pioneering work in the field of computing. 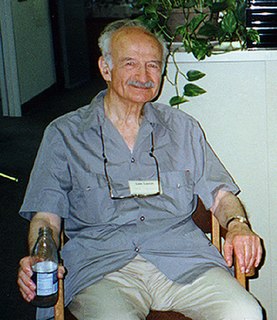 Lee Alexander Lorch was an American mathematician, early civil rights activist, and communist. His leadership in the campaign to desegregate Stuyvesant Town, a large housing development on the East Side of Manhattan, helped eventually to make housing discrimination illegal in the United States but also resulted in Lorch losing his own job twice. He and his family then moved to the Southern United States where he and his wife, Grace Lorch, became involved in the civil rights movement there while also teaching at several Black colleges. He encouraged black students to pursue studies in mathematics and mentored several of the first black men and women to earn PhDs in mathematics in the United States. After moving to Canada as a result of McCarthyism, he ended his career as professor emeritus of mathematics at York University in Toronto, Ontario.

The Edyth May Sliffe Award is given annually to (roughly) 20 teachers in the United States by the Mathematical Association of America (MAA). The awards are funded by a bequest from a retired high school mathematics teacher named Edyth May Sliffe, of Emeryville, California. Her purpose was to award high school teachers whose students have done well on the AHSME, now the AMC 12. She felt students who won in math competitions received honors, but their teachers never received any recognition.

Joseph A. Gallian is an American mathematician, the Morse Alumni Distinguished University Professor of Teaching in the Department of Mathematics and Statistics at the University of Minnesota Duluth.

The College Mathematics Journal is an expository magazine aimed at teachers of college mathematics, particular those teaching the first two years. It is published by Taylor & Francis on behalf of the Mathematical Association of America and is a continuation of Two-Year College Mathematics Journal. It covers all aspects of mathematics. It publishes articles intended to enhance undergraduate instruction and classroom learning, including expository articles, short notes, problems, and "mathematical ephemera" such as fallacious proofs, quotations, cartoons, poetry, and humor. Paid circulation in 2008 was 9,000 and total circulation was 9,500.

Doris J. Schattschneider is an American mathematician, a retired professor of mathematics at Moravian College. She is known for writing about tessellations and about the art of M. C. Escher, for helping Martin Gardner validate and popularize the pentagon tiling discoveries of amateur mathematician Marjorie Rice, and for co-directing with Eugene Klotz the project that developed The Geometer's Sketchpad.

There is a long history of women in mathematics in the United States. All women mentioned here are American unless otherwise noted.

Alissa Susan Crans is an American mathematician specializing in higher-dimensional algebra. She is a professor of mathematics at Loyola Marymount University, and the associate director of Project NExT, a program of the Mathematical Association of America to mentor post-doctoral mathematicians, statisticians, and mathematics teachers.

Pamela Estephania Harris is a Mexican-American mathematician, educator and advocate for immigrants. She is an associate professor at Williams College in Williamstown, Massachusetts and co-founder of the online platform Lathisms. She is also an editor of the e-mentoring blog of the American Mathematical Society (AMS).

Allison Henrich is an American mathematician specializing in knot theory and also interested in undergraduate-level mathematics research mentorship. She is a professor of mathematics at Seattle University.

Ezra Abraham "Bud" Brown is an American mathematician active in combinatorics, algebraic number theory, elliptic curves, graph theory, expository mathematics and cryptography. He spent most of his career at Virginia Tech where he is now Alumni Distinguished Professor Emeritus of Mathematics.

Lisa Mantini is an American mathematician.