The society is one of the four parts of the Joint Policy Board for Mathematics and a member of the Conference Board of the Mathematical Sciences.

In 1951 there was a south-eastern sectional meeting of the Mathematical Association of America in Nashville. [7] [8] [9] The citation delivered at the 2007 MAA awards presentation, where Lee Lorch received a standing ovation, recorded that:

" Lee Lorch, the chair of the mathematics department at Fisk University, and three Black colleagues, Evelyn Boyd (now Granville), Walter Brown, and H. M. Holloway came to the meeting and were able to attend the scientific sessions. However, the organizer for the closing banquet refused to honor the reservations of these four mathematicians. (Letters in Science, August 10, 1951, pp. 161–162 spell out the details). Lorch and his colleagues wrote to the governing bodies of the AMS [American Mathematical Society] and MAA seeking bylaws against discrimination. Bylaws were not changed, but non-discriminatory policies were established and have been strictly observed since then." [10] [11] [12]

Also in 1951, the American Mathematical Society's headquarters moved from New York City to Providence, Rhode Island. The society later added an office in Ann Arbor, Michigan in 1965 [13] and an office in Washington, D.C. in 1992.

In 1954 the society called for the creation of a new teaching degree, a Doctor of Arts in Mathematics, similar to a PhD but without a research thesis. [14]

In the 1970s, as reported in "A Brief History of the Association for Women in Mathematics: The Presidents' Perspectives", by Lenore Blum, "In those years the AMS [American Mathematical Society] was governed by what could only be called an 'old boys network,' closed to all but those in the inner circle." Mary W. Gray challenged that situation by "sitting in on the Council meeting in Atlantic City. When she was told she had to leave, she refused saying she would wait until the police came. (Mary relates the story somewhat differently: When she was told she had to leave, she responded she could find no rules in the by-laws restricting attendance at Council meetings. She was then told it was by 'gentlemen's agreement.' Naturally Mary replied 'Well, obviously I'm no gentleman.') After that time, Council meetings were open to observers and the process of democratization of the Society had begun." [15] Also, in 1971 the AMS established its Joint Committee on Women in the Mathematical Sciences (JCW), which later became a joint committee of multiple scholarly societies. [16]

Julia Robinson was the first female president of the American Mathematical Society (1983–1984) but was unable to complete her term as she was suffering from leukemia. [17]

The AMS, along with more than a dozen other organizations, holds the largest annual research mathematics meeting in the world, the Joint Mathematics Meeting, in early January. The 2019 Joint Mathematics Meeting in Baltimore drew approximately 6,000 attendees. Each of the four regional sections of the AMS (Central, Eastern, Southeastern, and Western) holds meetings in the spring and fall of each year. The society also co-sponsors meetings with other international mathematical societies.

The AMS selects an annual class of Fellows who have made outstanding contributions to the advancement of mathematics. [18]

Some prizes are awarded jointly with other mathematical organizations. See specific articles for details.

The AMS creates outreach materials aimed at middle school, high school, and college students. These include:

The AMS was an early advocate of the typesetting program TeX, requiring that contributions be written in it and producing its own packages AMS-TeX and AMS-LaTeX. TeX and LaTeX are now ubiquitous in mathematical publishing.

The AMS is led by the President, who is elected for a two-year term, and cannot serve for two consecutive terms. [20]

Marianna Csörnyei is a Hungarian mathematician who works as a professor at the University of Chicago. She does research in real analysis, geometric measure theory, and geometric nonlinear functional analysis. She proved the equivalence of the zero measure notions of infinite dimensional Banach spaces.

Evelyn Boyd Granville was the second African-American woman to receive a Ph.D. in mathematics from an American university; she earned it in 1949 from Yale University. She graduated from Smith College in 1945. She performed pioneering work in the field of computing.

Lee Alexander Lorch was an American mathematician, early civil rights activist, and communist. His leadership in the campaign to desegregate Stuyvesant Town, a large housing development on the East Side of Manhattan, helped eventually to make housing discrimination illegal in the United States but also resulted in Lorch losing his own job twice. He and his family then moved to the Southern United States where he and his wife, Grace Lorch, became involved in the civil rights movement there while also teaching at several Black colleges. He encouraged black students to pursue studies in mathematics and mentored several of the first black men and women to earn PhDs in mathematics in the United States. After moving to Canada as a result of McCarthyism, he ended his career as professor emeritus of mathematics at York University in Toronto, Ontario.

Bhama Srinivasan is a mathematician known for her work in the representation theory of finite groups. Her contributions were honored with the 1990 Noether Lecture. She served as President of the Association for Women in Mathematics from 1981 to 1983. She earned her Ph.D. in physics in 1959 with her dissertation Problems on Modular Representations of Finite Groups under J. A. Green at the University of Manchester. She currently is a professor at the University of Illinois at Chicago. She has had five doctoral students. She has co-authored a number of papers with Paul Fong in modular representation theory and Deligne–Lusztig theory. 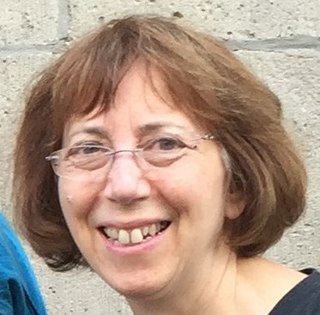 Carolyn S. Gordon is a mathematician and Benjamin Cheney Professor of Mathematics at Dartmouth College. She is most well known for giving a negative answer to the question "Can you hear the shape of a drum?" in her work with David Webb and Scott A. Wolpert. She is a Chauvenet Prize winner and a 2010 Noether Lecturer.

The Ruth Lyttle Satter Prize in Mathematics, also called the Satter Prize, is one of twenty-one prizes given out by the American Mathematical Society (AMS). It is presented biennially in recognition of an outstanding contribution to mathematics research by a woman in the previous six years. The award was established in 1990 using a donation from Joan Birman, in memory of her sister, Ruth Lyttle Satter, who worked primarily in biological sciences, and was a proponent for equal opportunities for women in science. First awarded in 1991, the award is intended to "honor [Satter's] commitment to research and to encourage women in science". The winner is selected by the council of the AMS, based on the recommendation of a selection committee. The prize is awarded at the Joint Mathematics Meetings during odd numbered years, and has always carried a modest cash reward. Since 2003, the prize has been $5,000, while from 1997 to 2001, the prize came with $1,200, and prior to that it was $4,000. If a joint award is made, the prize money is split between the recipients.

Georgia McClure Benkart was an American mathematician who was known for her work in the structure and representation theory of Lie algebras and related algebraic structures. She published over 130 journal articles and co-authored 3 American Mathematical Society Memoirs in four broad categories: modular Lie algebras; combinatorics of Lie algebra representations; graded algebras and superalgebras; and quantum groups and related structures.

Hee Oh is a South Korean mathematician who works in dynamical systems. She has made contributions to dynamics and its connections to number theory. She is a student of homogeneous dynamics and has worked extensively on counting and equidistribution for Apollonian circle packings, Sierpinski carpets and Schottky dances. She is currently the Abraham Robinson Professor of Mathematics at Yale University.

There is a long history of women in mathematics in the United States. All women mentioned here are American unless otherwise noted. 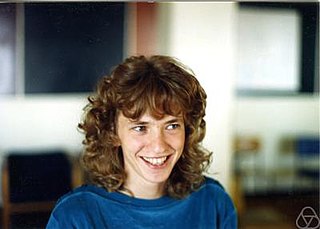 Abigail A. Thompson is an American mathematician. She works as a professor of mathematics at the University of California, Davis, where she specializes in knot theory and low-dimensional topology.

Alissa Susan Crans is an American mathematician specializing in higher-dimensional algebra. She is a professor of mathematics at Loyola Marymount University, and the associate director of Project NExT, a program of the Mathematical Association of America to mentor post-doctoral mathematicians, statisticians, and mathematics teachers.

Ruth I. Michler was an American-born mathematician of German descent who lived and worked in the United States. She earned her Ph.D. in Mathematics from the University of California, Berkeley, and she was a tenured associate professor at the University of North Texas. She died at the age of 33 while visiting Northeastern University, after which at least three memorial conferences were held in her honor, and the Ruth I. Michler Memorial Prize was established in her memory.

Naomi D. Fisher is an American mathematician and mathematics educator and professor emerita of mathematics and computer science at the University of Illinois at Chicago.

Lisa Mantini is an American mathematician.

This article incorporates material from American Mathematical Society on PlanetMath, which is licensed under the Creative Commons Attribution/Share-Alike License.