Memury is a village in Kottayam district in the Indian state of Kerala. [1]

Cyriac K. Pullapilly, [2] a well-known theologian and historian, was raised in Memury. He later traveled to the United States, received his Ph.D. from the University of Chicago. He wrote over twenty historical books in English and in Malayalam. 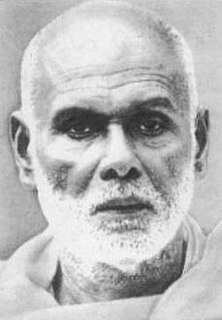 Narayana Guru was a philosopher, spiritual leader and social reformer in India. He was born into a family that belonged to the Ezhava caste. He led a reform movement against the injustice in the caste-ridden society of Kerala in order to promote spiritual enlightenment and social equality.

Swaffham Prior is a village in East Cambridgeshire, England.

Dr. Nurcholish Madjid, in his homeland affectionately known as Cak Nur, was a prominent Indonesian Muslim intellectual. Early in his academic career, Nurcholish was a leader in various student organizations. He soon became well known as a proponent for modernization within Islam. Throughout his career he continued to argue that for Islam to be victorious in the global struggle of ideas, it needs to embrace the concepts of tolerance, democracy and pluralism.

Nedumpallil or Nedumballil is a family from Kerala. It has now Hindu and Christian branches. There are Nedumpallil/Nedumbally namboodiri families located in Trichur, Irinjalakkuda and Srikrishnapuram. The Christian families of Nedumpally belong to Syrian Catholic, Malankara Orthodox and Jacobite denominations. The Nedumpally Christians were one of the original Christians who received baptism from Thomas the Apostle.

The caste system in Kerala differed from that found in the rest of India. While the Indian caste system generally modeled the four-fold division of society into Brahmins, Kshatriyas, Vaishyas and Shudras, in Kerala the Nambudiri Brahmins formed the priestly class and only rarely recognized anyone else as being other than Shudra or untouchables, the latter being outside the caste system entirely. Thus, the Kerala caste system was ritualized but it was not the varna model found elsewhere. In Southern India, only in Kerala did there appear warrior lineages approximate to the Kshatriya model. These warriors never lost their identity as Sudras. Nair Kshatriya hood is based on special ecological conditions and it is a case of elevated sudra to Kshatriya status.

The Nambudiri(Malayalam pronunciation: ​[n̪ampuːtɪɾɪ]), also transliterated Nambūdiri, Namboodiri, Namboothiri, and Nampūtiri, NampiThiru, are a Malayali Brahmin caste, native to what is now the state of Kerala, India.

The Ezhavas are a community with origins in the region of India presently known as Kerala, where in the 2010s they constituted about 23% of the population and were reported to be the largest Hindu community. They are also known as Ilhava, Irava, Izhava and Erava in the south of the region; as Chovas, Chokons and Chogons in Central Travancore; and as Thiyyar, Tiyyas and Theeyas in the Malabar region. Some are also known as Thandan, which has caused administrative difficulties due to the presence of a distinct caste of Thandan in the same region. The Malabar Thiyyar group have claimed a higher ranking in the Hindu caste system than do the others, although from the perspective of the colonial and subsequent administrations they were treated as being of similar rank.

The Mannanars were a Thiyya dynasty of Malabar, in the present-day Kannur and Kasaragod districts of India. They may have had a Buddhist heritage. The word Mannanar derives from mannan, meaning king and ar, which pluralises it.Even in modern times there was a Thiyyar royal family named "mannanar" at a place called Eruvesseri close by the river Thoniyar at the coorg border of north malabar. The head of that family had royal emblems and could move about in manchal (palanquin) and take with him retainers wearing swords and shield. A Thiyyar named Taliparamba Possesses a large extent of land granted by a former Raja of Chirakkal, on condition of his taking under his protection all excommunicated Nambuthiri females, if they choose to go with him. He has special rank and privileges, and has the title of Mannanar or machchiyar.

Kulakkada is a village in Kollam district in the state of Kerala, India.

Malali is a village in Mysore district, Karnataka, India.

Balekundri (K.H.) is a village in the southern state of Karnataka, India. It is located in the Belgaum taluk of Belgaum district in Karnataka.

M. K. Hubli is a village in the southern state of Karnataka, India. It is located in the Kittur taluk of Belgaum district in Karnataka. M K Hubballi's full form is Mugut Khan Hubballi

Mamadapur is a village in the southern state of Karnataka, India. It is located in the Gokak taluk of Belgaum district in Karnataka. It is the birthplace of Wrangler D.C. Pavate

Alagawadi is a village in the southern state of Karnataka, India. It is located in the Navalgund taluk of Dharwad district in Karnataka.

Cyriac K. Pullapilly was a Fellow of the Royal Society of Arts, a former priest of the Syro-Malabar Catholic Church and a professor of history at Saint Mary's College, Indiana. 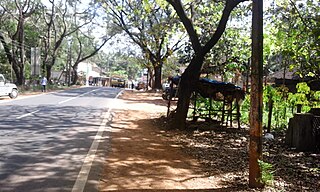 Karimba is a gram panchayat in the Palakkad district, state of Kerala, India, near the National Highway 213. The largest town in Karimba panchayath is Kalladikode. It borders with Thachampara, Kongad and Mundur. Recently, it was awarded the Nirmal Gram Title (sanitation). It is the local government organisation that serves the villages of Karimba-I and Karimba-II.