Michael Feichtenbeiner (born 9 July 1960) is a German football coach who is the Technical Director of Malaysian team Selangor.

After playing for amateur teams of TV Gültstein, SV Vaihingen and FV Germania Degerloch, Feichtenbeiner started coaching in VfB Stuttgart as youth coach. A spell as head coach at Swiss club BSC Old Boys Basel and assistant coach at Stuttgarter Kickers followed, before he was appointed as head coach of TSF Ditzingen. From 1993 to 1997 he oversaw the promotion of the club from Oberliga Baden-Württemberg to Regionalliga Süd. Feichtenbeiner then becomes the assistant coach for KFC Uerdingen 05 in 1997, and head coach of SC Pfullendorf in 1998.

In the summer of 1999 Feichtenbeiner was appointed as head coach of Stuttgarter Kickers, his first job as head coach of a 2. Bundesliga club. Under his charge, the club made waves in the DFB Cup, defeating three Bundesliga clubs (Borussia Dortmund, Arminia Bielefeld and SC Freiburg) en route to the semi-finals where they were finally eliminated by Werder Bremen after extra time. [1] However the club's league form were poor, and Feichtenbeiner was fired in March 2000 having only gained 21 points from 24 matches and left the club in the relegation zone.

Feichtenbeiner later coached several Regionalliga Süd teams (SV Darmstadt 98, Rot-Weiß Erfurt, Sportfreunde Siegen) before coaching in Malaysia for MPPJ FC in 2005, saving them from relegation to Malaysia Premier League. [2] [3] After being fired by MPPJ FC in early August 2006 while the club were leading the Malaysia Super League, [4] [5] he was reappointed as head coach of SC Pfullendorf in late 2006.

Feichtenbeiner worked as sporting director of SV Wehen Wiesbaden, where he joined in late December 2012, [6] until his dismissal at the end of 2014-15 season. [7]

He was appointed as head coach of Germany under-15 national football team in 2016. [8] That team became the Under-16 and then the Under-17 squad as the players aged.

In December 2019, he was appointed by Selangor FA as Technical Director for two-year contract. He is also responsible to coach their reserve team, Selangor II. [9] 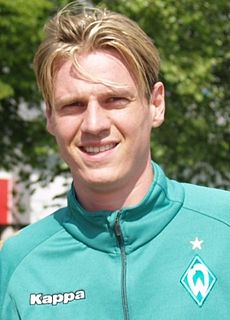 Tim Borowski is a German football assistant manager of SV Werder Bremen and a former professional midfielder who played from 2002 to 2008 for the German national team. 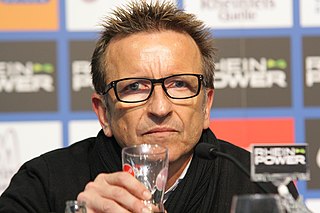 Norbert Meier is a German former football player, who played as a midfielder, and manager who last managed KFC Uerdingen. 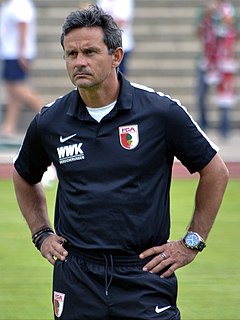 Eberhard Dirk Schuster is a German professional football manager and former player who played as a defender. He is the current manager of Erzgebirge Aue. 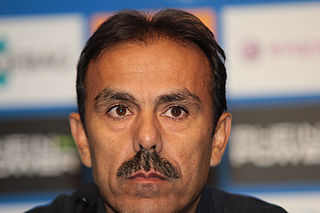 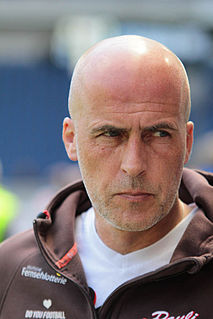 Michael Frontzeck is a German professional football coach and former player who played as a left back. He earned 19 caps for the (West) German national team and was in the squad at Euro 1992.

The 2000–01 DFB-Pokal was the 58th season of the annual German football cup competition. 64 teams competed in the tournament of six rounds which began on 25 August 2000 and ended on 26 May 2001. In the final Schalke 04 defeated third tier Union Berlin 2–0 thereby claiming their third title. 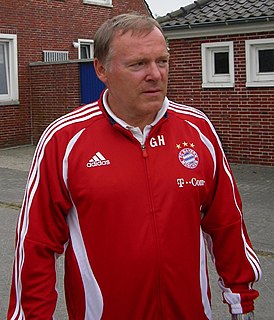 Hermann "Tiger" Gerland is a German professional football manager and former player who is currently working as an assistant coach of Bundesliga club Bayern Munich. 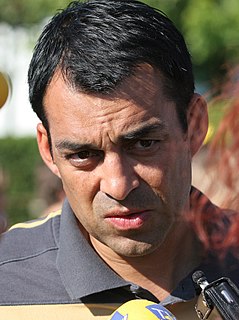 The 2008–09 3. Liga was the inaugural season for the newly formed tier III of the German football league system. The inaugural game was played on 25 July 2008 between FC Rot-Weiß Erfurt and Dynamo Dresden, ending with a 1–0 win for Dresden. The last games were played on 23 May 2009. 1. FC Union Berlin were the inaugural champions, securing first place on 10 May 2009. Runners-up Fortuna Düsseldorf were also promoted. Third-placed team SC Paderborn 07 played a relegation/promotion play-off against the 16th-placed team from 2. Bundesliga, VfL Osnabrück, winning both games and earning promotion. Kickers Emden, VfR Aalen, and Stuttgarter Kickers were relegated to the Regionalliga.

The 2011–12 Regionalliga season was the eighteenth season of the Regionalliga since its re-establishment after German reunification and the fourth as a fourth-level league within the German football league system. It was contested in three regional divisions.

The 1995–96 Bayern Munich season was their 95th season of existence and 31st Bundesliga season.

The 2013–14 Stuttgarter Kickers season is the 114th season in the club's football history. In 2013–14 the club plays in the 3. Liga, the third tier of German football. It is the club's second season back in this league, having been promoted from the Regionalliga in 2012. The club also takes part in the 2013–14 edition of the Württemberg Cup.

Reduan Abdullah is a retired Malaysian football player, and a current coach.