Middelheim Open Air Sculpture Museum (Dutch Beeldentuin Middelheim Museum) is a sculpture park of 30 acres in the park part of the Middelheim Nachtegalen Park at Antwerp.

In 1342, Middelheim is mentioned as a stede geheten Middelheim. Since the 16th century, it was used as a summer residence for rich merchants from Antwerp. In the 18th century, Pierre François Gisbert van Schorel, Lord of Wilrijk brought an important art collection in the castle featuring notable artworks from Rubens and Van Dyck among others.

Then, the estate was ceded to the Knight Parthon de Von where he wrote the Fables and dedicated himself to horticulture. In 1842, it was sold to the Le Grelle family, which sold it to the Antwerp municipality in 1910.

The Middelheimmuseum park is known for its sculpture, which arose from the 'Biennale Middelheim', which was held in the park every two years since 1951. [1] After twenty episodes of this sculpture exhibition in 1989 they decided to choose another way to supplement the image collection. The layout of the sculpture park has the shape of four fluttering strips on both sides of the Middelheimlaan, that cuts through the middle of the park.

The collection comprises two hundred images, including several dozen installed in the city of Antwerp. In addition, the Open Air Museum has hundreds of sculptures which are displayed through temporary exhibitions in the Braem Pavilion. In this pavilion fragile pieces are lined up that can not be place outdoors. The Burgemeester Lode Craeybeckx documentation centre of the sculpture park is located in the Orangerie of the Middelheimpark.

In 2012, the botanical garden Hortiflora with an area of 5 hectares was added to the existing sculpture park. This creates a natural connection to the Nachtegalen Park. On the side of the Hortiflora the architect Paul Robbrecht designed a new half open exhibition building called The House. This is a five meter high transparent semi volume with a clear geometry. In his own words the designer sees the building as an intimate building, populated with temporary residents. It wants to be a space that nurtures and protects. Not oversized, like most contemporary museums but on a human scale: A pavilion that makes possible a temporary one-to-one relationship with art. The planner has also outlined new lines into the existing landscape.

The collection includes works by many leading sculptors of modern and contemporary visual art, among others:

The Bonnefanten Museum is a museum of fine art in Maastricht, Netherlands.

Constantin Lucaci was a Romanian contemporary sculptor, best known for his monumentalist sculptures and his kinetic fountains most made from stainless steel, among which those from the Romanian cities of Reşiţa and Constanţa are best known. He was born in Bocşa Română, today a part of Bocşa, Caraş Severin. 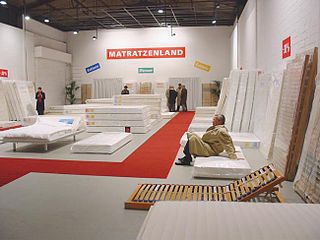 Guillaume Bijl, is a Belgian conceptual and installation artist. He lives and works in Antwerp.

Kati Heck is an artist based in Antwerp. Though her work spans sculptural installation, short film, and photography, she is best known for her large-scale paintings.

Luciano Fabro was an Italian sculptor, conceptual artist and writer associated with the Arte Povera movement. 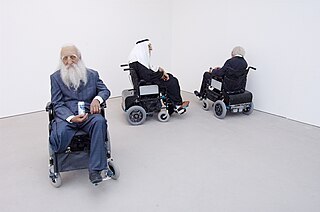 Sun Yuan and Peng Yu are artists living and working collaboratively in Beijing since the late 1990s.

Hercules the Archer is a sculpture by Antoine Bourdelle, originally made in 1909, which now exists in many versions. It was a commission of the financier and philanthropist Gabriel Thomas, as a single copy in gilt-bronze in April 1909; Bourdelle worked on the sculpture in the summer of 1909. It was cast by Eugène Rudier, and it was exhibited at the National Society of Fine Arts in 1910, and much appreciated. The dimensions were 2.50 m × 2.40 m. 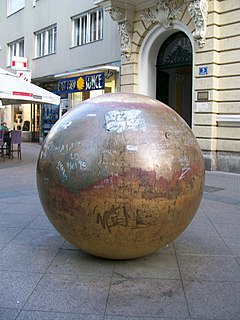 Ivan Kožarić is a Croatian artist who works primarily with sculpture but also works in a wide variety of media, including: permanent and temporary sculptures, assemblages, proclamations, photographs, paintings and installations. He lives and works in Zagreb, Croatia.

Hakone Open-Air Museum is Japan's first open-air museum, opened in 1969 in Hakone in Ashigarashimo District, Kanagawa Prefecture, Japan. It has collections of artworks made by Picasso, Henry Moore, Taro Okamoto, Yasuo Mizui, Churyo Sato, and many others, featuring over a thousand sculptures and works of art. The museum is affiliated with the Fujisankei Communications Group media conglomerate.

Giovanni Anselmo is an artist who emerged in Italy after World War II within the art movement called Arte Povera. His most famous artwork is Untitled (1968), a piece of art representing time and nature.

The National Taiwan Museum of Fine Arts is a museum in West District, Taichung, Taiwan. NTMoFA was established in 1988, is the first and the only national-grade fine arts museum in Taiwan. The major collections are works by Taiwanese artists, covering modern and contemporary Taiwanese arts. The museum covers 102,000 square meters, including the Public Outdoor Sculpture park, marks it one of the largest museums in Asia.

Kim Lim (1936–1997) was a Singaporean-British sculptor and printmaker of Chinese descent. She is most recognized for her abstract wooden and stone-carved sculptures that explore the relationship between art and nature, and works on paper that developed alongside her sculptural practice. Lim's attention to the minute details of curve, line and surface made her an exponent of minimalism.

Paolo De Grandis is an Italian contemporary art curator and president of PDG Arte Communications. He lives currently in Venice.

Yasuo Mizui was a Japanese stone sculptor who lived in France. He preferred abstract form in public sculpture within architectural contexts and took part in several symposia on sculpture in Europe, the US, Israel, and Japan.

Bart Cassiman, freelance-curator, art critic and editor, is an art historian and studied press- and communication sciences at the Ghent University (1979-1984).

Hans Nieuwdorp is a Belgian art historian specialized in late medieval sculpture. In 2000, he was appointed director of the Art Museums of the City of Antwerp.