Last updated November 16, 2020
Model-based design of software is not to be confused with model-based definition of physical objects.

Model-based design (MBD) is a mathematical and visual method of addressing problems associated with designing complex control, [1] signal processing [2] and communication systems. It is used in many motion control, industrial equipment, aerospace, and automotive applications. [3] [4] [5] Model-based design is a methodology applied in designing embedded software. [6] [7] [8]

The model-based design is significantly different from traditional design methodology. Rather than using complex structures and extensive software code, designers can use Model-based design to define plant models with advanced functional characteristics using continuous-time and discrete-time building blocks. These built models used with simulation tools can lead to rapid prototyping, software testing, and verification. Not only is the testing and verification process enhanced, but also, in some cases, hardware-in-the-loop simulation can be used with the new design paradigm to perform testing of dynamic effects on the system more quickly and much more efficiently than with traditional design methodology.

The dawn of the electrical age brought many innovative and advanced control systems. As early as the 1920s two aspects of engineering, control theory and control systems, converged to make large-scale integrated systems possible. In those early days controls systems were commonly used in the industrial environment. Large process facilities started using process controllers for regulating continuous variables such as temperature, pressure, and flow rate. Electrical relays built into ladder-like networks were one of the first discrete control devices to automate an entire manufacturing process.

In 1969, the first computer-based controllers were introduced. These early programmable logic controllers (PLC) mimicked the operations of already available discrete control technologies that used the out-dated relay ladders. The advent of PC technology brought a drastic shift in the process and discrete control market. An off-the-shelf desktop loaded with adequate hardware and software can run an entire process unit, and execute complex and established PID algorithms or work as a Distributed Control System (DCS).

The main steps in model-based design approach are:

The disadvantages of model-based design are fairly well understood this late in development lifecycle of the product and development.

While Model-based design has the ability to simulate test scenarios and interpret simulations well, in real world production environments, it is often not suitable. Over reliance on a given toolchain can lead to significant rework and possibly compromise entire engineering approaches. While it's suitable for bench work, the choice to use this for a production system should be made very carefully.

Some of the advantages model-based design offers in comparison to the traditional approach are: [9]

Because of the limitations of graphical tools, design engineers previously relied heavily on text-based programming and mathematical models. However, developing these models was time-consuming, and highly prone to error. In addition, debugging text-based programs is a tedious process, requiring much trial and error before a final fault-free model could be created, especially since mathematical models undergo unseen changes during the translation through the various design stages.

Graphical modeling tools aim to improve these aspects of design. These tools provide a very generic and unified graphical modeling environment, and they reduce the complexity of model designs by breaking them into hierarchies of individual design blocks. Designers can thus achieve multiple levels of model fidelity by simply substituting one block element with another. Graphical models also help engineers to conceptualize the entire system and simplify the process of transporting the model from one stage to another in the design process. Boeing's simulator EASY5 was among the first modeling tools to be provided with a graphical user interface, together with AMESim, a multi-domain, multi-level platform based on the Bond Graph theory. This was soon followed by tool like 20-sim and Dymola, which allowed models to be composed of physical components like masses, springs, resistors, etc. These were later followed by many other modern tools such as Simulink and LabVIEW. 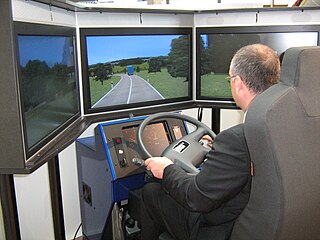 A simulation is an approximate imitation of the operation of a process or system that represents its operation over time. 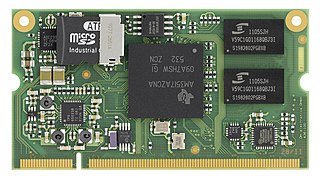 In computing, a visual programming language (VPL) is any programming language that lets users create programs by manipulating program elements graphically rather than by specifying them textually. A VPL allows programming with visual expressions, spatial arrangements of text and graphic symbols, used either as elements of syntax or secondary notation. For example, many VPLs are based on the idea of "boxes and arrows", where boxes or other screen objects are treated as entities, connected by arrows, lines or arcs which represent relations. 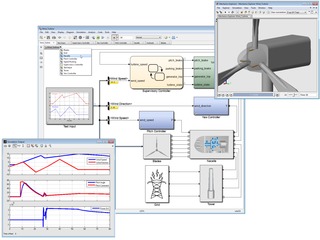 VisSim is a visual block diagram program for simulation of dynamical systems and model based design of embedded systems, with its own visual language. It is developed by Visual Solutions of Westford, Massachusetts. Visual Solutions was acquired by Altair in August 2014 and its products have been rebranded as Altair Embed as a part of Altair's Model Based Development Suite. With Embed, you can develop virtual prototypes of dynamic systems. Models are built by sliding blocks into the work area and wiring them together with the mouse. Embed automatically converts the control diagrams into C-code ready to be downloaded to the target hardware.

Hardware-in-the-loop (HIL) simulation, or HWIL, is a technique that is used in the development and test of complex real-time embedded systems. HIL simulation provides an effective platform by adding the complexity of the plant under control to the test platform. The complexity of the plant under control is included in test and development by adding a mathematical representation of all related dynamic systems. These mathematical representations are referred to as the “plant simulation”. The embedded system to be tested interacts with this plant simulation.

Simulation software is based on the process of modeling a real phenomenon with a set of mathematical formulas. It is, essentially, a program that allows the user to observe an operation through simulation without actually performing that operation. Simulation software is used widely to design equipment so that the final product will be as close to design specs as possible without expensive in process modification. Simulation software with real-time response is often used in gaming, but it also has important industrial applications. When the penalty for improper operation is costly, such as airplane pilots, nuclear power plant operators, or chemical plant operators, a mock up of the actual control panel is connected to a real-time simulation of the physical response, giving valuable training experience without fear of a disastrous outcome.

EICASLAB is a software suite providing a laboratory for automatic control design and time-series forecasting developed as final output of the European ACODUASIS Project IPS-2001-42068 funded by the European Community within the Innovation Programme. The Project - during its lifetime - aimed at delivering in the robotic field the scientific breakthrough of a new methodology for the automatic control design.

MapleSim is a Modelica-based, multi-domain modeling and simulation tool developed by Maplesoft. MapleSim generates model equations, runs simulations, and performs analyses using the symbolic and numeric mathematical engine of Maple. Models are created by dragging-and-dropping components from a library into a central workspace, resulting in a model that represents the physical system in a graphical form. Maplesoft began development of MapleSim partly in response to a request from Toyota to produce physical modeling tools to aid in their new model-based development process. 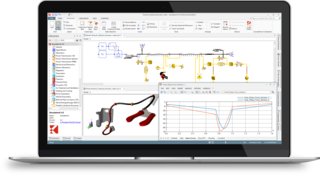 SimulationX is a CAE software application running on Microsoft Windows for the physical simulation of technical systems developed and sold by ESI ITI GmbH in Dresden, Germany.

Continuous Simulation refers to a computer model of a physical system that continuously tracks system response according to a set of equations typically involving differential equations.

Simcad Pro simulation software is a product of CreateASoft, Inc which is used for simulating process based environments such as manufacturing, supply lines, logistics, healthcare, and many others. The on-the-fly, interactive dynamic process simulation software has a patented no coding modeling environment. It is a tool used for planning, organizing, optimizing, and engineering real process based systems. Simcad Pro allows the creation of a computer model, which can be manipulated by the user and represents a real environment. Using the model, it is possible to test for efficiency in any scenario possible, as well as locate points of improvement among the process flow. Simcad Pro's dynamic computer model also allows for changes to occur while the model is running for a fully realistic simulation. It is also able to be integrated with live and historical data.

dSPACE GmbH, located in Paderborn, Germany, is one of the world's leading providers of tools for developing electronic control units.

PragmaDev Studio is a modeling and testing software tool introduced by PragmaDev in 2002 dedicated to the specification of communicating systems. It was initially called Real Time Developer Studio or RTDS. Its primary objective was to support SDL-RT modeling technology. Since V5.0 launched on October 7, 2015 RTDS is called PragmaDev Studio, and it is organized in four independent modules: Specifier, Developer, Tester and Tracer. V5.1 launched on November 29, 2016 introduces a freemium licensing model.

System-level simulation (SLS) is a collection of practical methods used in the field of systems engineering, in order to simulate, with a computer, the global behavior of large cyber-physical systems.

Predictive engineering analytics (PEA) is a development approach for the manufacturing industry that helps with the design of complex products. It concerns the introduction of new software tools, the integration between those, and a refinement of simulation and testing processes to improve collaboration between analysis teams that handle different applications. This is combined with intelligent reporting and data analytics. The objective is to let simulation drive the design, to predict product behavior rather than to react on issues which may arise, and to install a process that lets design continue after product delivery.