The Moscow State Symphony Orchestra (MSSO) is a Russian orchestra, based in Moscow. The orchestra gives concerts primarily at the Great Hall of the Moscow Conservatory, [1] and at the Tchaikovsky Concert Hall. As well, the orchestra gives concerts in the Great Hall of the Saint-Petersburg D.D. Shostakovich Philharmonic Society, as well as in other Russian cities.

The International Russian Rotary Children's Music Competition is one of the leading events in cultural life of Russian and European youth. The competition take place in the Moscow State Conservatory P. I. Tchaikovsky or other concert halls in Moscow. 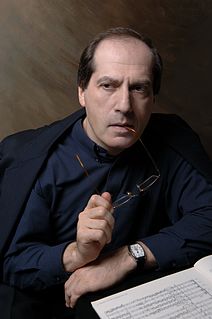 Pavel Leonidovich Kogan is a Russian violinist and conductor who leaded the Moscow State Symphony Orchestra from 1989 until 2022.

Nikolai Pavlovich Anosov was a Soviet conductor and pedagogue who conducted the Moscow State Symphony Orchestra (МГАСО) after Lev Steinberg. He was the father of Gennady Rozhdestvensky, who adopted the maiden name of his mother, soprano Natalya Rozhdestvenskaya in its masculine form to avoid the appearance of nepotism when making his own career, and the painter P. N. Anosov.