The Moscow Symphony Orchestra is a non-state-supported Russian symphony orchestra, founded in 1989 by the sisters Ellen and Marina Levine. [1] The musicians include graduates from such institutions as Moscow, Kiev, and Saint Petersburg Conservatory. The orchestra has recorded over 100 CDs for Naxos [2] and Marco Polo. The current Music Director is the Dutch conductor Arthur Arnold.

Past Music Directors included Antonio de Almeida and Vladimir Ziva. Moscow Symphony Orchestra performs its Master Series in the historic Grand Hall of Moscow Conservatory. The orchestra has performed with Russian soloists such as Yuri Bashmet, Victor Tretyakov, Vadim Repin, Alexander Knyazev, Alexander Rudin, Alexander Ghindin and Andrei Korobeinikov and with international soloists such as Ana Durlovski and Torleif Thedéen. The MSO has toured to most European countries, as well as Hong Kong, Japan, South Korea, China, Argentina and the United States. The orchestra has also been a regular participant in international music festivals in Germany, Austria, Italy and Cyprus, Argentina.

Theodore Kerkezos is a Greek classical saxophonist. He is “…one of the most astounding performers of the day.” Gramophone

Maxim Viktorovich Fedotov is a Russian violinist and conductor, People's Artist of Russia, son of the conductor Viktor Fedotov.

Sergei Polusmiak born in 1951 in Kharkiv, Ukraine is a Ukrainian Pianist "Merited Artist of Ukraine". He graduated from Kharkiv Music College in 1969 and from Kharkiv Conservatory in 1975, where he studied with Regina Horowitz, sister of Vladimir Horowitz. in 1978 he received the Post Graduate Diploma at Kiev Conservatory, Ukraine and in 1981 completed Advanced Studies at Moscow State Tchaikovsky Conservatory, Russia. From 1975 to 1998 Sergei Polusmiak was teaching at Kharkiv Conservatory and at the Kharkiv Special Music School for Gifted Children Sergei Polusmiak started his professional career as a music educator and as a concert pianist by teaching, giving master classes, playing solo piano recitals, chamber music recitals and as a soloist with symphony orchestras. For his contribution as a concert pianist Sergei Polusmiak was awarded the title of "Merited Artist of Ukraine" by the President of Ukraine. in 1996 Sergei Polusmiak became a Full Professor of piano at Kharkiv Institute of Arts.

Anatoly Andreyevich Brandukov was a Russian cellist who premiered many cello pieces of prominent composers including Pyotr Tchaikovsky and Sergei Rachmaninoff. Born as Russian classical music was flourishing in the middle of the 19th century, he worked with many of the important composers and musicians of the day, including performances with Anton Rubinstein and Alexander Siloti. As a soloist, he excelled in performance and was especially noted for stylish interpretations, his refined temperament, and beautiful, expressive tone. In his later years, he became a professor at Moscow Conservatory, and continued to perform well into his later life. Although his popularity is obscured by the more famous composers and virtuosos, his influence on those composers' most prominent compositions is evident.

Oxana Yablonskaya is a Russian pianist who has had an active international performance career since the early 1960s. She began her career in the USSR and, although winning several important competitions in the West, was denied permission by the Soviet government to accept any performance engagements outside of the Soviet bloc. Frustrated by her career limitations, she emigrated to the United States in 1977. Described by The New York Times as an "internationally known virtuoso" and "one of the country's most distinguished musical residents", Yablonskaya has toured in concert and recital throughout the world and has made numerous recordings. She taught as a member of the piano faculty at the Juilliard School for more than 30 years, until 2009.

Alexander Tselyakov is a Russian-Canadian classical concert pianist and educator.

Igor Zubkovsky is a Russian cellist.

Alexander Israilevich Rudin is a Russian classical cellist and conductor.

Jonathan Leshnoff is an American classical music composer and pedagogue. 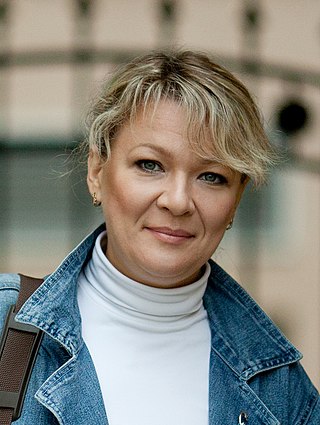