Municipium (pl. municipia) is the Latin term for a town or city. [1] Etymologically the municipium was a social contract among municipes, the "duty holders", or citizens of the town. The duties, or munera , were a communal obligation assumed by the municipes in exchange for the privileges and protections of citizenship. Every citizen was a municeps. [2]

The distinction of municipia was not made in the Roman Kingdom; instead, the immediate neighbours of the city were invited or compelled to transfer their populations to the urban structure of Rome, where they took up residence in neighbourhoods and became Romans per se. Under the Roman Republic the practical considerations of incorporating communities into the city-state of Rome forced the Romans to devise the concept of municipium, a distinct state under the jurisdiction of Rome. It was necessary to distinguish various types of municipia and other settlements, such as the colony. In the early Roman Empire these distinctions began to disappear; for example, when Pliny the Elder served in the Roman army, the distinctions were only nominal. In the final stage of development, all citizens of all cities and towns throughout the empire were equally citizens of Rome. The municipium then simply meant municipality, the lowest level of local government.

Creation of a municipium

The munera and the citizenship and its rights and protections were specific to the community. No matter where a person lived, at home or abroad, or what his status or class, he was a citizen of the locality in which he was born. The distinguishing characteristic of the municipium was self-governance. Like any ancient city-state, the municipium was created by an official act of synoecism, or founding. This act removed the sovereignty and independence from the signatory local communities, replacing them with the jurisdiction of a common government. This government was then called the res publica 'public affair' or in the Greek world the koinon 'common affair'.

The term municipium began to be used with reference to the city-states of Italy brought into the city-state of Rome but not incorporated into the city. The city of Romulus synoecised the nearby settlements of Latium, transferring their populations to the seven hills, where they resided in typically distinct neighbourhoods. And yet, Sabines continued to live in the Sabine Hills and Alba Longa continued even though synoecised. The exact sequence of events is not known, whether the populace was given a choice or the synoecised sites were reoccupied. As it is unlikely that all the Sabines were invited to Rome, where facilities to feed and house them did not yet exist, it seems clear that population transfer was only offered to some. The rest continued on as independent localities under the ultimate governance of Rome. Under the Roman Republic the impracticality of transferring numerous large city-states to Rome was manifest. The answer to the problem was the municipium. The town would be partially synoecised. The local government would remain but to its munera would be added munera due to the city of Rome. The partial synoecism took the form of a charter granting incorporation into the city of Rome and defining the rights and responsibilities of the citizens. The first municipium was Tusculum.

Two orders of the municipia

The citizens of municipia of the first order held full Roman citizenship and their rights (civitas optimo iure) included the right to vote, which was the ultimate right in Rome, and a sure sign of full rights.

The second order of municipia comprised important tribal centres which had come under Roman control. Residents of these did not become full Roman citizens (although their magistrates could become so after retirement). They were given the duties of full citizens in terms of liability to taxes and military service, but not all of the rights: most significantly, they had no right to vote.

Executive power in municipium was held by four annually elected officials, composed of two duumvirs and two aediles. Advisory powers were held by the decurions, appointed members of the local equivalent to the Senate. In later years, these became hereditary.

Examples for grants of municipia

Citizenship is a "relationship between an individual and a state to which the individual owes allegiance and in turn is entitled to its protection". 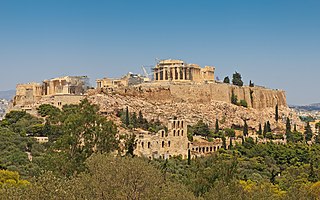 Polis, plural poleis, literally means "city" in Greek. In Ancient Greece, it originally referred to an administrative and religious city center, as distinct from the rest of the city. Later, it also came to mean the body of citizens under a city's jurisdiction. In modern historiography, the term is normally used to refer to the ancient Greek city-states, such as Classical Athens and its contemporaries, and thus is often translated as "city-state". The poleis were not like other primordial ancient city-states like Tyre or Sidon, which were ruled by a king or a small oligarchy; rather, they were political entities ruled by their bodies of citizens. 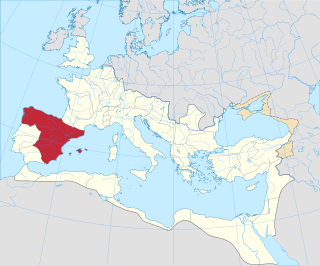 Hispania Tarraconensis was one of three Roman provinces in Hispania. It encompassed much of the northern, eastern and central territories of modern Spain along with modern northern Portugal. Southern Spain, the region now called Andalusia, was the province of Hispania Baetica. On the Atlantic west lay the province of Lusitania, partially coincident with modern-day Portugal. 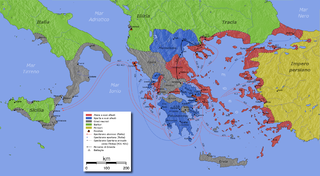 Synoecism or synecism, also spelled synoikism, was originally the amalgamation of villages in Ancient Greece into poleis, or city-states. Etymologically the word means "dwelling together (syn) in the same house (oikos)." Subsequently, any act of civic union between polities of any size was described by the word synoikismos. The closest analogy today is the incorporation of a city; in fact, "incorporation" is often used to translate synoikismos, in addition to the Latinized synoecism. Synoecism is opposed to Greek dioecism, the creation of independent communities within the territory of a polis. 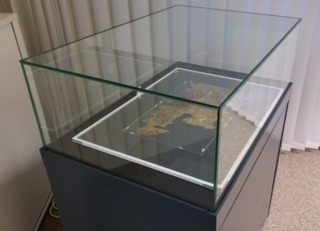 The Constitutio Antoniniana was an edict issued in AD 212, by the Roman Emperor Caracalla. It declared that all free men in the Roman Empire were to be given full Roman citizenship, with the exception of the dediticii, people who had become subject to Rome through surrender in war, and freed slaves. 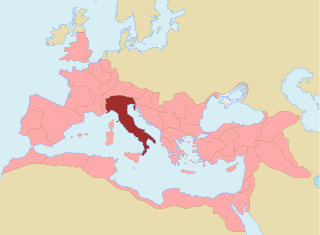 Italia was the homeland of the Romans and metropole of the Roman Republic and Roman Empire in classical antiquity. According to Roman mythology, Italy was the ancestral home promised by Jupiter to Aeneas of Troy and his descendants, who were the founders of Rome. Aside from the legendary accounts, Rome was an Italic city-state that changed its form of government from Kingdom to Republic and then grew within the context of a peninsula dominated by the Gauls, Ligures, Veneti, Camunni and Histri in the North, the Etruscans, Latins, Falisci, Picentes and Umbri tribes in the Centre, and the Iapygian tribes, the Oscan tribes and Greek colonies in the South. 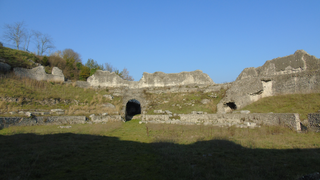 Latin rights were a set of legal rights that were originally granted to the Latins under Roman law in their original territory and therefore in their colonies. "Latinitas" was commonly used by Roman jurists to denote this status. With the Roman expansion in Italy, many settlements and coloniae outside of Latium had Latin rights. 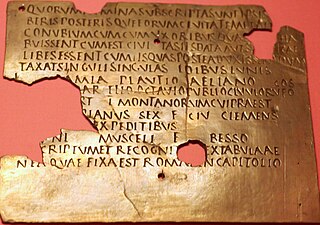 Social class in ancient Rome was hierarchical, with multiple and overlapping social hierarchies. An individual's relative position in one might be higher or lower than in another, which complicated the social composition of Rome. 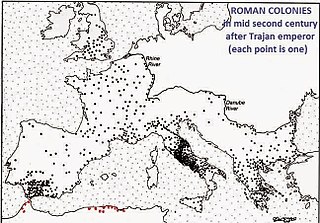 A Roman colonia was originally a Roman outpost established in conquered territory to secure it. Eventually, however, the term came to denote the highest status of a Roman city.

The Romans used provincial and local governments to govern conquered territories without having to rule them directly.

In Ancient Rome, the vicus designated a village within a rural area (pagus) or the neighbourhood of a larger settlement. During the Republican era, the four regiones of the city of Rome were subdivided into vici. In the 1st century BC, Augustus reorganized the city for administrative purposes into 14 regions, comprising 265 vici. Each vicus had its own board of officials who oversaw local matters. These administrative divisions are recorded as still in effect at least until the mid-4th century.

In the early Roman Empire, from 30 BC to AD 212, a peregrinus was a free provincial subject of the Empire who was not a Roman citizen. Peregrini constituted the vast majority of the Empire's inhabitants in the 1st and 2nd centuries AD. In AD 212, all free inhabitants of the Empire were granted citizenship by the Constitutio Antoniniana, with the exception of the dediticii, people who had become subject to Rome through surrender in war, and freed slaves. 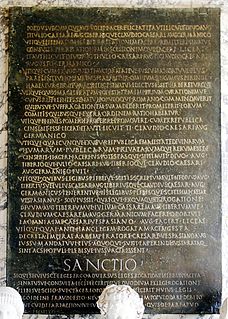 Ius or Jus in ancient Rome was a right to which a citizen (civis) was entitled by virtue of his citizenship (civitas). The iura were specified by laws, so ius sometimes meant law. As one went to the law courts to sue for one's rights, ius also meant justice and the place where justice was sought. 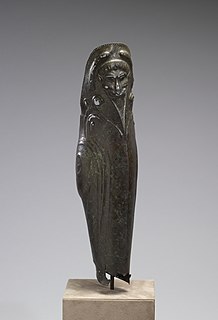 A civitas foederata, meaning "allied state/community", was the most elevated type of autonomous cities and local communities under Roman rule. 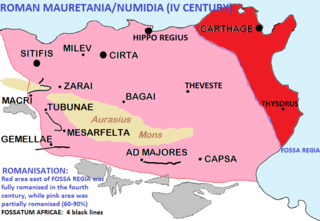 Wikisource has the text of the 1911 Encyclopædia Britannica article " Municipium ".
This page is based on this Wikipedia article
Text is available under the CC BY-SA 4.0 license; additional terms may apply.
Images, videos and audio are available under their respective licenses.