NDB is published in German by the Historical Commission at the Bavarian Academy of Sciences and Humanities and printed by Duncker & Humblot in Berlin. The index and full-text articles of the first 25 volumes are freely available online via the website German Biography ( Deutsche Biographie ) and the Biographical Portal.

Its first volume, alphabetically covering names from "Aachen" to "Behaim", was published in 1953. As of 2016, the most recent volume is the 26th, covering names from "Tecklenburg" to "Vocke", which was published in October 2016. So far, more than 22,500 biographies of individuals and families, who lived in the German language area (Sprachraum), have been published. Some 1,600 further articles will be added in two further volumes, with completion expected in 2021.

An NDB article usually contains genealogical information such as date and place of birth, date and place of death, tomb, parents, grandparents, marriages, divorces, number of children, alternate and birth names, academic degrees, a curriculum vitae in whole sentences, a valuation of the subject's political, economic, social, scientific, technical or artistic achievements, a bibliography and references to portraits. Only deceased persons with a close relation to the German language area are recorded. Each article is signed by its author.

Count Eduard Clam-Gallas was an Austrian general. He was the eldest son of Count Christian Christoph Clam-Gallas (1771–1838), patron of Beethoven, and Countess Josephine Clary-Aldringen (1777–1828).

Sibylle von Olfers was a German art teacher and a nun who worked as an author and illustrator of children's books. In 1906 she published her best-known work, The Root Children. 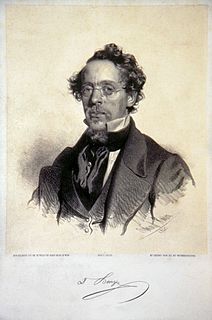 Johann Nepomuk Berger was an Austrian lawyer, politician and writer. 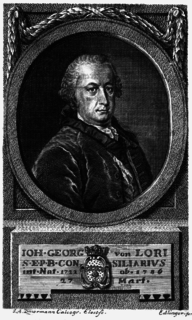 Johann Georg von Lori was a Bavarian high official, lawyer and historian. He was the driving force behind the foundation of the Bavarian Academy of Sciences and Humanities in 1759.

Wilhelm August Lampadius was born in Hehlen, Braunschweig-Wolfenbüttel, on 8 August 1772 and died on 13 April 1842 in Freiberg, Kingdom of Saxony. He was a German pharmacist in Göttingen from 1785 until 1791. Also he was an "extraordinary professor" of chemistry and mineralogy in 1794 and an "ordinary professor" in 1795. He taught at the Mining Academy in Freiberg.
Lampadius is best known for inflaming the first coal gas lantern on European ground.

The Biographical Portal is a free online index to biographical reference works in the German language area. Intended to facilitate access to reliable biographical information, it contains entries for more than 160,000 biographies of persons from all social backgrounds and nearly all periods of German, Austrian, Swiss, Slovenian and South-East European history.

Karl Wilhelm Franz Brümmer was a German educator and lexicographer.

Theodor Fuchs was an Austrian geologist and paleontologist.

Joseph Schreyvogel was a Viennese writer and journalist. He also worked as a dramaturge.

Deutsche Biographie is a German-language online biographical dictionary. It published thus far information about more than 730,000 individuals and families (2016). All entries are linked to the Integrated Authority File (GND).

Johann Josef Spitzeder was a German actor and singer. A popular artist in his own right, he is today mostly remembered for being the father of confidence trickster and actress Adele Spitzeder.

Hans-Christof Kraus is a German historian.

August von Eisenhart was a Bavarian lawyer who became a politician. Between 1870 and 1876 he served as the king's cabinet secretary. The appointment was almost certainly made at the instigation of the powerful Interior Minister Johann von Lutz. The king himself became increasingly reclusive during the 1870s: commentators indicate that von Eisenhart became, in effect, the sole intermediary between King Ludwig II and the outside world - which included the other members of the Bavarian government. 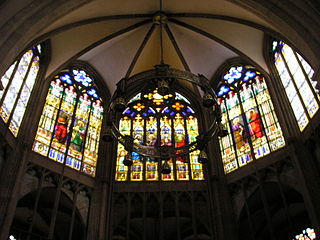 Johannes von Gmünd, born in the years 1320–30, probably in Schwäbisch Gmünd, and died after 1359, is a German Gothic architect and construction foreman who probably belonged to the Parler family.