The New Zealand Centennial Exhibition took place over six months from Wednesday 8 November 1939 until 4 May 1940. It celebrated one hundred years since the signing of the Treaty of Waitangi in 1840 and the subsequent mass European settlement of New Zealand. 2,641,043 (2.6 million) visitors attended the exhibition.

The exhibition was opened on 8 September 1939 by the Governor-General, The Viscount Galway and the Mayor of Wellington, Thomas Hislop. [1] [2] [3] [4]

The exhibition took for its site a location at Rongotai [5] in Wellington, Edmund Anscombe designing the buildings and grounds in the Art Deco style. Construction began on 27 April 1939 by the firm Fletcher and Love Construction Companies and over 1,000 staff were employed in the process of building the exhibition. The exhibition grounds were just over 55 acres (220,000 m2) in size, with the main buildings accounting for around 14 acres (57,000 m2) of this.

2,641,043 (2.6 million) visitors attended the exhibition.[ citation needed ] The last time an event of such a scale had been held was the New Zealand and South Seas International Exhibition in 1925–26, when 3.2 million visitors were counted at the exhibition in Dunedin. [6] Anscombe had also been the architect for the Dunedin exhibition. [6]

In February 1938 tenders were invited by the New Zealand Centennial Exhibition Company Ltd for official photographer for the Exhibition. The submission of Eileen Olive Deste (1908–1986) included a testimonial from John A. Lee, under-secretary for housing in the Labour government, for a housing-exhibition project in the Kirkcaldie and Stains gallery in 1937. Deste won the exclusive right to photograph exhibits or any other object in the exhibition buildings or grounds, with a percentage of the gross takings from the sale of the photographs going to the Exhibition Company. The photography rights covered all aspects of the exhibition, from construction to closing. Deste flew above the site in a small plane to take aerial shots, a terrifying but exciting experience, as she later remembered. Deste also entered into an agreement with Coulls Somerville Wilkie Limited to supply photographs for publications and general souvenir material, and her photographs illustrate their Pictorial souvenir of the New Zealand Centennial Exhibition, 1939–1940. Deste's stall in the General Exhibits Building sold photographs and postcards in black and white and colour. Much of the photography at the exhibition came from the camera of an employee, Neville d’Eresby (Des) Aickin, while Deste did the processing and printing at her studio. [7]

In 1939-1940 potters Olive Jones and Elizabeth Matheson demonstrated and sold work at the New Zealand Centennial Exhibition for six months. [8]

Plans envisaged using the building only for six months and then dismantling it. But with New Zealand's ongoing participation in World War II (1939–1945), the New Zealand Air Force used the site and some buildings until the end of the war. In 1946 what remained was burnt to the ground. [9]

New Zealand and South Seas Exhibitions may refer to:

Rita Angus, a New Zealand painter, has a reputation - along with Colin McCahon and Toss Woollaston - as one of the leading figures in twentieth-century New Zealand art. She worked primarily in oil and water colour, and became well known for her portraits and landscapes.

The following lists events that happened during 1939 in New Zealand. 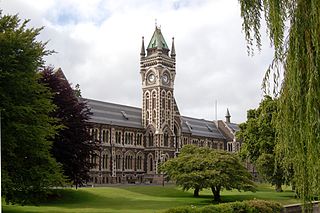 The University of Otago Registry Building, also known as the Clocktower Building, is a Victorian and later structure in the city of Dunedin, New Zealand. It stands next to the banks of the Water of Leith and is constructed from contrasting dark Leith Valley basalt and Oamaru stone, with a foundation of Port Chalmers breccia. The building houses the administrative centre of the university, and the office of the Vice-Chancellor. It has a Category I listing with Heritage New Zealand. 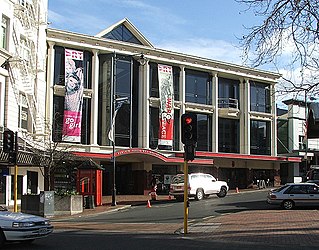 The Dunedin Public Art Gallery holds the main public art collection of the city of Dunedin, New Zealand. Located in The Octagon in the heart of the city, it is close to the city's public library, Dunedin Town Hall, and other facilities such as the Regent Theatre. 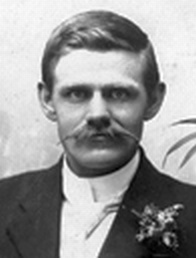 Edmund Anscombe was one of the most important figures to shape the architectural and urban fabric of New Zealand. He was important, not only because of the prolific nature of his practice and the quality of his work, but also because of the range and the scale of his built and speculative projects. These extended from conventional essays to monumental urban schemes informed by his international travel, especially in America. His influence was specifically felt in Dunedin, Wellington and Hastings, yet he also realised projects in Alexandra, Invercargill, Palmerston, Palmerston North, Rotorua, Waimate North and Wanaka. His key works include the 1925–26 New Zealand and South Seas International Exhibition, the 1940 New Zealand Centennial Exhibition, the Herd Street Post and Telegraph building, Anscombe Flats, the Empire Deluxe theatre and his work on the clocktower complex – including specifically the Archway Building and Marama Hall – effectively re-conceiving the design of the University of Otago's historical core.(University of Otago Clocktower complex). His sister is painter Eliza Anscombe

Rongotai is a suburb of Wellington, New Zealand, located southeast of the city centre. It is on the Rongotai isthmus, between the Miramar Peninsula and the suburbs of Kilbirnie and Lyall Bay. It is known mostly for being the location of the Wellington International Airport. It is roughly in the centre of the Rongotai electorate, which is much bigger than the suburb. 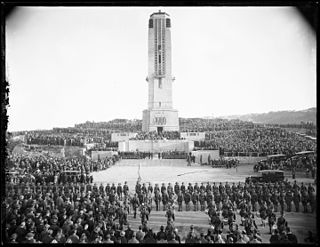 Gummer and Ford was an architectural firm founded in 1923 in Auckland, New Zealand, by William Gummer and Charles Reginald Ford. It was among the country's best-regarded architectural firm of the first half of the 20th century, designing numerous iconic buildings, including the former National Art Gallery and Dominion Museum in Wellington and the old Auckland Railway Station. Eighteen of the company's buildings have been registered as significant historic places by Heritage New Zealand. In 2006 an exhibition of their work was staged at The University of Auckland's Gus Fisher Gallery, and in 2007 the firm was described as 'the best architectural practice of all time in New Zealand'.

Rata Alice Lovell-Smith was a New Zealand artist from Christchurch.

A centennial, or centenary in British English, is a 100th anniversary or otherwise relates to a century, a period of 100 years.

Peter Chanel Peryer was a New Zealand photographer. In 2000, he was one of the five inaugural laureates of the Arts Foundation of New Zealand.

Lily Attey Daff was a British-born designer and artist who worked in New Zealand and published watercolour paintings and line drawings of many native New Zealand birds and flowers.

Harriet Sophia Cobb was a New Zealand photographer. Her works are held in the collection of the Museum of New Zealand Te Papa Tongarewa. Cobb operated two successful photography studios in the late 1800s and into the 20th century. 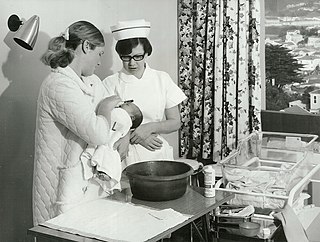 The St Helens Hospitals were maternity hospitals located in seven New Zealand cities. They were the first state-run maternity hospitals in the world offering both midwifery services and midwifery training. The first hospital opened in 1905 in Wellington and the last one in Wanganui in 1921. The services of the St Helens Hospitals were gradually incorporated into other hospitals and the last hospital to close was in Auckland in 1990.

Elizabeth Matheson was a New Zealand potter. Her works are held at the Museum of New Zealand Te Papa Tongarewa and at the Auckland War Memorial Museum. She was awarded the British Empire Medal for services to pottery.

Thomas George Gordon Beck was a New Zealand civil engineer who had a leading role in public works engineering projects in New Zealand.