The Nordic Chess Championship (Nordiska Schackkongressen) is a biennal chess tournament which determines the champion of the Nordic countries. The first edition took place in Stockholm in 1897. [1] [2] [3]

Teimour Boris oghlu Radjabov is an Azerbaijani chess Grandmaster, ranked number 10 in the world as of August 2021. 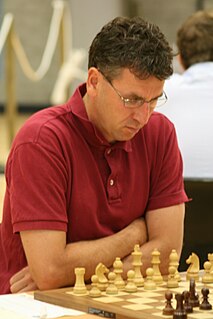 Simen Agdestein is a Norwegian chess grandmaster, chess coach, author, and former professional footballer as a striker for the Norway national football team.

Peter Høeg Gade is a former Danish professional badminton player. He currently resides in Holte in Copenhagen. He has two children with the former handball player Camilla Høeg.

Alexander Igorevich Grischuk is a Russian chess player. He was awarded the title of Grandmaster by FIDE in 2000. Grischuk was the Russian champion in 2009. He is also a three-time world blitz chess champion.

The Norwegian Chess Championship is an annual tournament held in Norway during the month of July, in order to determine the national chess champion. The tournament is held at different venues each year as part of the Landsturnering. Clubs may bid for this tournament, which is awarded by the Norwegian Chess Federation.

The Danish Chess Championship was organised by the Danish Chess Union (DSU) and first held in 1910. A masterclass was first introduced in 1915. But it is only from 1922 that the title of Danish chess champion was introduced, this was the first year also players from Copenhagen joined.

The Second Europaturnier was held from 8 to 14 September 1941 in Munich. The event was organised by Ehrhardt Post, the Chief Executive of Nazi Grossdeutscher Schachbund. The First Europaturnier had taken place in Stuttgart in May 1939.

Jon Ludvig Nilssen Hammer is a Norwegian chess grandmaster and three-time Norwegian Chess Champion. He was the main second for Magnus Carlsen in the World Chess Championship 2013.

Lê Quang Liêm is a Vietnamese chess player, the top-ranked of his country. He was awarded the title of Grandmaster by FIDE in 2006. Liem is the current Asian champion and he was world champion in blitz chess in 2013.

Dariusz Świercz is a Polish-American chess player playing for the United States. He is the 30th-youngest player in history and the youngest Polish player of all time to qualify for the title Grandmaster; he was 14 years and seven months when he achieved this title in 2009. In 2018 he switched his national federation to the United States. Since 2019, Dariusz has been married to Keyla Swiercz.

Yrjö Aukusti Rantanen was a Finnish chess player, who was awarded the title of grandmaster by FIDE in 1981. He was a two-time Finnish chess champion, and won three medals at the Chess Olympiad.