Pocher is the son of Gerhard and Jutta Pocher; he was born and grew up in Hanover, West Germany. His parents are Jehovah's Witnesses and he too was raised as one. In 2007, Pocher stated that, unlike his parents, he had no contact with the organization anymore as he claimed "not to have agreed with their rules". [1]

Reports that Pocher had attended a Waldorf school were denied by his management. [2] Pocher successfully completed his training as an insurance broker at Signal Iduna Bauspar AG.

During the time of his apprenticeship he had some part-time jobs at various radio stations and as a DJ in clubs and during family celebrations. He also appeared in the comedian group Holla-Bolla and as an entertainer at Birte Karalus, a German chat show. After his apprenticeship he worked for the Swiss life insurance " Schweizerische Lebensversicherungs- und Rentenanstalt" (today: SwissLife) and the "HDI Lebensversicherung AG" (HDI life insurance).

Pocher's first television appearance was on 28 October 1998 at the afternoon chat show of Bärbel Schäfer. Pocher was given five minutes to make the audience laugh. [3]

In 2006 he recorded the single "Schwarz und Weiss", a song dedicated to the 2006 world cup. A music video was made, featuring Oliver as several pressbox speakers, as well as him performing the song in front of fans dressed in Team Germany attire. [5]

In 2008, his third single "Bringt ihn heim" (bring him home) was released. It is a song for the European Football Championship of 2008. The original version is Baschi's number one hit (Switzerland) "Bring en hei" [ citation needed ] He acted as a co-trainer of the European Team during the DEL All Star Game in 2009. [ citation needed ]

Pocher's contract was not renewed after April 2009, so he was hired by Sat.1 instead to present his own late night show, Die Oliver Pocher Show. The show's ratings were always below the station's average and even slipping over the course of the run until it was cancelled in March 2011.

From 2010 to 2014, Pocher was married to Alessandra "Sandy" Meyer-Wölden. He has four children. Since 2017, Pocher is married to Amira Aly. In March 2020, he was tested positive for coronavirus together with his spouse Amira Aly. [6]

Oliver Pocher has been widely criticised for his jokes at the expense of others. After he recommended plastic surgery to a woman of the audience of the Wetten, dass..? ("Wanna Bet..?") episode on 22 January 2005, he was sued for damages of €25,000. [7] Although he apologised to her on the phone and repeated this apology in public during one of his shows, he was not able to solve this conflict out of court. On 11 January Pocher was sentenced by the district court of Hanover to pay a fine of €6,000. The judge in charge called Pocher's statement ("You look quite old for your age”) a "very insulting comment”. The public insulting continued in January 2008 during the TV show "Johannes B. Kerner" when Pocher once again made fun of the same woman's appearance and mocked the verdict. As a result, another suit was filed against the entertainer. The victim's lawyer explained that the woman was insulted and that the topic is repeatedly brought up by people whom she meets during her work. Pocher did not comment on this. [8] Statements such as those made by Pocher could be legal in the future, as the Council of Europe is advising to decriminalise insults. [9]

Pocher caused a scandal in July 2005 during the ZDF (German broadcasting station) – show "Gottschalk & Friends" when he first insulted Mariah Carey and later accidentally spat water onto her. [10] For this action he was harshly criticised by some newspapers and by the broadcast station in charge. Gottschalk himself kept calm and commented on the incident: "Of course I do not want to have jokes at the expense of others during my show and I do not want corpses to be carried away from the battlefield afterwards. If you invite Pocher to your show, however, you should expect a different atmosphere than with, for example, Alfred Biolek."

When Pocher mocked the personal life of singer Sarah Connor and her reality show, Connor sued Pocher. While the exact outcome of the lawsuit is not known, Pocher did apologise to Connor. [11]

In January 2009, during the TV show Schmidt & Pocher, Pocher spoofed the Hitler assassin Claus Schenk Graf von Stauffenberg, who is portrayed by Tom Cruise in "Valkyrie". He had to face negative feedback for this and thereafter the broadcasting commission examined this incident. [12]

In February 2014, at the Vienna Ball, Oliver Pocher was interviewed by Mirjam Wechselbraun with Kim Kardashian. He joked that he was only going to dance when 'N****** in Vienna' was played. [13] [14]

Rent a Pocher was a German television show hosted by comedian Oliver Pocher. The weekly late-night show ran on Thursdays on the commercial television channel ProSieben and was produced by Brainpool. On the show, in addition to comedy bits and celebrity guests, Pocher offered to "rent" himself out to a viewer. For example, Pocher was rented as a babysitter, to pick grapes for wine and as an undertaker's assistant. The final episode aired on 14 April 2006.

Paul Hartmut Würdig, better known as Sido, is a German rapper. He interprets his artist name as "super-intelligentes Drogenopfer". It used to stand for "Scheiße in dein Ohr", a line from his track Terroarr.

Herbert Feuerstein was a German journalist, comedian and entertainer of Austrian descent. He was known as a publisher of the pardon satire magazine, as the editor of the German version of Mad, and for comedy work on television, especially as partner to Harald Schmidt in shows such as Schmidteinander. 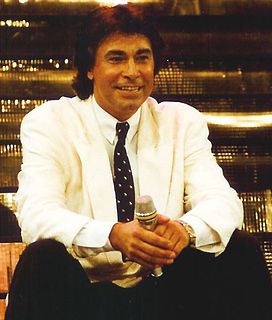 Gerhard Höllerich, known professionally as Roy Black, was a German schlager singer and actor, who appeared in several musical comedies and starred in the 1989 TV series, Ein Schloß am Wörthersee.

Hans-Jürgen Hubert Dohrenkamp, better known by his stage name Jürgen von der Lippe, is a German television presenter, entertainer, actor and comedian. His stage name comes from the fact that he was born near the source of the river Lippe. 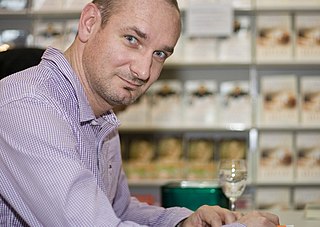 Harald Schmidt is a late night television show which was broadcast on ARD and hosted by Harald Schmidt from 23 December 2004 until 14 June 2007. It returned at 17 September 2009 after the show Schmidt & Pocher with Harald Schmidt and Oliver Pocher ended earlier that year.

Die Oliver Pocher Show was a late-night show with Oliver Pocher shown by Sat.1 in Germany on Fridays. The show is a mix of late-night comedy and personality. Each broadcast begins with stand-up comedy. There are generally two celebrity guests. During the first season, Pocher's father Gerard frequently appeared on the show as a sidekick.

Larissa-Antonia Marolt is an Austrian fashion model and actress. She was the winner of the first cycle of Austria's Next Topmodel. After her victory she also participated in the fourth season of Germany's Next Top Model, where she was placed eighth.

"Kennst du die Stars" is the third single by German rapper Bushido featuring comedian Oliver Pocher, from his album, Heavy Metal Payback. The song based on a hip-hop beat and a horns loop.

Ralf Husmann is a German TV producer, screenwriter and author. He is the creator of Stromberg, the German adaption of The Office.

Rainer Pries, better known by his stage name Fips Asmussen, was a German comedian and entertainer, known for his rapid delivery of puns and deliberately unfunny jokes. 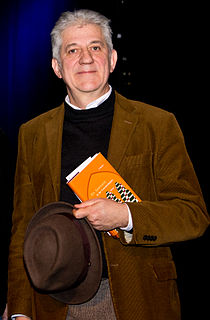 Promi Big Brother is a German television reality show based on the Dutch show Big Brother, created by producer John de Mol in 1997, which is airing from 2013. The show followed a number of celebrity contestants, known as Bewohner or Kandidaten, who were isolated from the outside world for an extended period of time in a custom built Set. In Season 1-7, after the second week, every day, one of the housemates were evicted by a public vote, with the last housemate, named the winner. In Season 8, Promi Big Brother will be airing for the first time, for three Weeks.

The first series of Promi Big Brother began on 13 September 2013 and ended on 27 September 2013. It is the first series of the Big Brother franchise on Sat.1, after it left RTL II, and the first in Germany after a 2-year hiatus. 12 housemates ("promis") entered the house on Day 1 with one more joining during the series. The show is co-hosted by Cindy aus Marzahn and Oliver Pocher.

Katy Nina Karrenbauer is a German actress, dubbing actress, singer, and author. She is known for her role as Christine Walter in the drama series Hinter Gittern – Der Frauenknast.

Lutz van der Horst is a German television presenter and comedian. He is most known for being a political satire reporter on the heute-show. 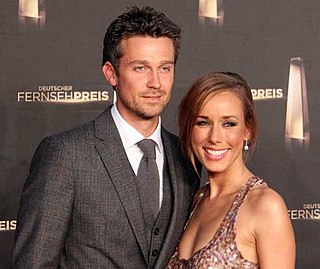 Annemarie Carpendale is a German television host and singer. From 2000 to 2005 she was a dancer in the band Bellini. She has been with ProSieben since 2005, where she hosts the tabloid programs taff and red!.