Oteman Sampson (born April 25, 1975) is a former American football quarterback who played three seasons in the Canadian Football League with the Calgary Stampeders, Toronto Argonauts and Ottawa Renegades. He first enrolled at Albany State University before transferring to Florida A&M University. [1] He attended Miami Edison High School in Little Haiti, Miami, Florida. [2] He was also a member of the San Francisco Demons of the XFL.

Manuel Alberto Diaz is a Cuban American politician currently serving as the chair of the Florida Democratic Party. From 2001 to 2009, he served as the mayor of Miami, Florida. 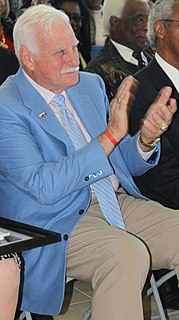 Howard Leslie Schnellenberger was an American football coach with long service at both the professional and college levels. He held head coaching positions with the National Football League's Baltimore Colts and in college for the University of Miami, University of Oklahoma, University of Louisville, and Florida Atlantic University. He won a national championship with Miami in 1983. Schnellenberger also worked extensively as an assistant coach at the college and pro levels, including as part of the staff of the undefeated 1972 Miami Dolphins. He is also famous for having recruited Joe Namath to Alabama for Bear Bryant in 1961. 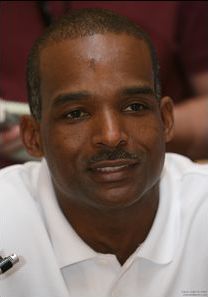 Randy Leonard Shannon is an American football coach and former player who is currently a senior defensive analyst for the Florida State Seminoles football program. Shannon was the head coach at the University of Miami from 2007 to 2010 and has served as an assistant coach for the National Football League's Miami Dolphins and several college teams, including stints as the defensive coordinator for the Miami Hurricanes, the Florida Gators, and the UCF Knights. He won the Frank Broyles Award as the nation's top collegiate assistant coach while at Miami in 2001.

Thomas Chandler Gailey Jr. is an American football coach. In 2020, he was the offensive coordinator for the Miami Dolphins of the National Football League (NFL). Gailey has previously served as the head coach of the Dallas Cowboys, Georgia Tech Yellow Jackets, and Buffalo Bills.

The FIU–Miami football brawl was a bench-clearing brawl that occurred on October 14, 2006 in a college football game between the University of Miami Hurricanes and the Florida International University Golden Panthers at the Miami Orange Bowl in Miami, Florida.

The 1987 Miami Hurricanes football team represented the University of Miami during the 1987 NCAA Division I-A football season. It was the Hurricanes' 62nd season of football. The Hurricanes were led by fourth-year head coach Jimmy Johnson and played their home games at the Orange Bowl. They finished the season 12–0 overall. They were invited to the Orange Bowl where they defeated Oklahoma, 20-14, to win the school's second national championship.

Louis Oliver, III is an American former college and professional football player who was a safety in the National Football League (NFL) for eight seasons during the 1980s and 1990s. Oliver played college football for the University of Florida, and was twice recognized as an All-American. He was a first-round pick in the 1989 NFL Draft, and played professionally for the Miami Dolphins and the Cincinnati Bengals of the NFL. 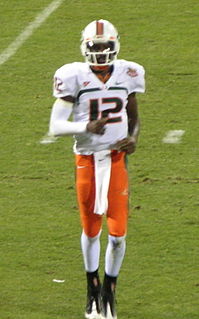 Jacory Sherrod Harris is a former Canadian football quarterback for the Montreal Alouettes of the Canadian Football League (CFL) and a current firefighter in Miami, FL. Harris started for Miami Northwestern High School during his last two years; he was unbeaten (30-0) and led the team to two state championships. In his senior year, Harris broke the state record for passing touchdowns and won the 2007 High School Football National Championship. He was named Florida's Mr. Football. During his freshman year of college in 2008 with the Miami Hurricanes, he split time with Robert Marve in a two-quarterback system. After the Emerald Bowl in late December, Marve transferred to Purdue, effectively making Harris the undisputed starter for the rest of his career as a Hurricane. He signed with the Philadelphia Eagles as an undrafted free agent in May 2012. 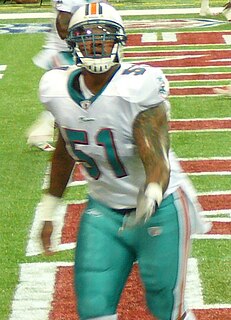 James Michael Pouncey is a former American football center who played ten seasons in the National Football League (NFL). He played college football for the University of Florida, was a member of a BCS National Championship team, and earned All-American honors. He was drafted by the Miami Dolphins in the first round of the 2011 NFL Draft, and played the final three seasons of his career with the Los Angeles Chargers. He is the twin brother of former NFL center Maurkice Pouncey.

The 2014 Miami Beach Bowl was a post-season American college football bowl game played on December 22, 2014, at Marlins Park in Miami, Florida. The first edition of the Miami Beach Bowl, it featured the American Athletic Conference co-champion Memphis Tigers against the BYU Cougars. It began at 2:00 p.m. EST and aired on ESPN. It was one of the 2014–15 bowl games that comprised the conclusion of the 2014 FBS football season.

Dalvin James Cook is an American football running back for the Minnesota Vikings of the National Football League (NFL). He played college football at Florida State, where he finished his career as the school's all-time leading rusher. Cook was drafted by the Vikings in the second round of the 2017 NFL Draft.