Otto Stolz (3 July 1842 – 23 November 1905) [1] was an Austrian mathematician noted for his work on mathematical analysis and infinitesimals. Born in Hall in Tirol, he studied in Innsbruck from 1860 and in Vienna from 1863, receiving his habilitation there in 1867. Two years later he studied in Berlin under Karl Weierstrass, Ernst Kummer and Leopold Kronecker, and in 1871 heard lectures in Göttingen by Alfred Clebsch and Felix Klein (with whom he would later correspond), before returning to Innsbruck permanently as a professor of mathematics.

His work began with geometry (on which he wrote his thesis) but after the influence of Weierstrass it shifted to real analysis, and many small useful theorems are credited to him. For example, he proved that a continuous function f on a closed interval [a, b] with midpoint convexity, i.e.,

He died in 1905 shortly after finishing work on Einleitung in die Funktionentheorie. His name lives on in the Stolz–Cesàro theorem.

Stolz published a number of papers containing constructions of non-Archimedean extensions of the real numbers, as detailed by Ehrlich (2006). His work, as well as that of Paul du Bois-Reymond, was sharply criticized by Georg Cantor as an "abomination". Cantor published a "proof-sketch" of the inconsistency of infinitesimals. The errors in Cantor's proof are analyzed by Ehrlich (2006).

Georg Ferdinand Ludwig Philipp Cantor was a German mathematician. He created set theory, which has become a fundamental theory in mathematics. Cantor established the importance of one-to-one correspondence between the members of two sets, defined infinite and well-ordered sets, and proved that the real numbers are more numerous than the natural numbers. In fact, Cantor's method of proof of this theorem implies the existence of an infinity of infinities. He defined the cardinal and ordinal numbers and their arithmetic. Cantor's work is of great philosophical interest, a fact he was well aware of.

In mathematical analysis, the Weierstrass approximation theorem states that every continuous function defined on a closed interval [a, b] can be uniformly approximated as closely as desired by a polynomial function. Because polynomials are among the simplest functions, and because computers can directly evaluate polynomials, this theorem has both practical and theoretical relevance, especially in polynomial interpolation. The original version of this result was established by Karl Weierstrass in 1885 using the Weierstrass transform.

In mathematics, the system of hyperreal numbers is a way of treating infinite and infinitesimal quantities. The hyperreals, or nonstandard reals, *R, are an extension of the real numbers R that contains numbers greater than anything of the form

In mathematics, an infinitesimal or infinitesimal number is a quantity that is closer to zero than any standard real number, but that is not zero. The word infinitesimal comes from a 17th-century Modern Latin coinage infinitesimus, which originally referred to the "infinity-th" item in a sequence.

Otto Ludwig Hölder was a German mathematician born in Stuttgart. 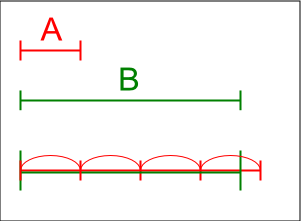 In abstract algebra and analysis, the Archimedean property, named after the ancient Greek mathematician Archimedes of Syracuse, is a property held by some algebraic structures, such as ordered or normed groups, and fields. The property, typically construed, states that given two positive numbers x and y, there is an integer n so that nx > y. It also means that the set of natural numbers is not bounded above. Roughly speaking, it is the property of having no infinitely large or infinitely small elements. It was Otto Stolz who gave the axiom of Archimedes its name because it appears as Axiom V of Archimedes’ On the Sphere and Cylinder.

The arithmetization of analysis was a research program in the foundations of mathematics carried out in the second half of the 19th century. 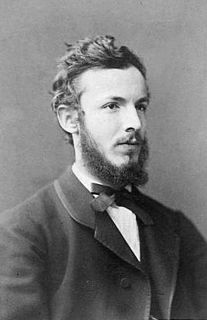 Cantor's first set theory article contains Georg Cantor's first theorems of transfinite set theory, which studies infinite sets and their properties. One of these theorems is his "revolutionary discovery" that the set of all real numbers is uncountably, rather than countably, infinite. This theorem is proved using Cantor's first uncountability proof, which differs from the more familiar proof using his diagonal argument. The title of the article, "On a Property of the Collection of All Real Algebraic Numbers", refers to its first theorem: the set of real algebraic numbers is countable. Cantor's article was published in 1874. In 1879, he modified his uncountability proof by using the topological notion of a set being dense in an interval.

Carlo Severini was an Italian mathematician: he was born in Arcevia and died in Pesaro. Severini, independently from Dmitri Fyodorovich Egorov, proved and published earlier a proof of the theorem now known as Egorov's theorem.