The ovation (Latin : ovatio from ovare: to rejoice) was a form of the Roman triumph. Ovations were granted when war was not declared between enemies on the level of nations or states; when an enemy was considered basely inferior (e.g., slaves, pirates); or when the general conflict was resolved with little or no danger to the army itself. [1]

The general celebrating the ovation did not enter the city on a biga , a chariot pulled by two white horses, as generals celebrating triumphs did, but instead walked in the toga praetexta of a magistrate.

The honoured general also wore a wreath of myrtle (sacred to Venus) upon his brow, rather than the triumphal wreath of laurel. The Roman Senate did not precede the general, nor did soldiers usually participate in the procession.

Perhaps the most famous ovation in history is that which Marcus Licinius Crassus celebrated after his victory of the Third Servile War.

There were 23 known ovations during the Republic. [2] 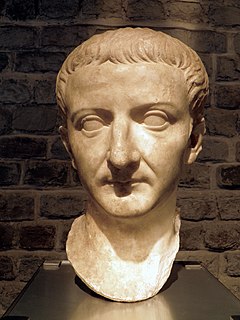 Tiberius was the second Roman emperor, reigning from AD 14 to 37. He succeeded his stepfather, Augustus.

Plautia Urgulanilla was the first wife of the future Roman Emperor Claudius. They were married circa 9 AD, when he was 18 years old. Suetonius writes that they were divorced in 24 AD on the grounds of 'her scandalous love affairs and the suspicion of murder.

The spolia opima were the armour, arms, and other effects that an ancient Roman general stripped from the body of an opposing commander slain in single combat. The spolia opima were regarded as the most honourable of the several kinds of war trophies a commander could obtain, including enemy military standards and the peaks of warships.

Tiberius Claudius Nero is the name of several ancient Roman men of the gens Claudia. 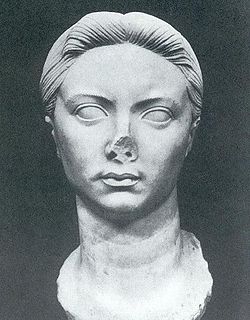 Vipsania Agrippina was the first wife of the Emperor Tiberius. She was the daughter of Marcus Vipsanius Agrippa and Pomponia Caecilia Attica, thus a granddaughter of Titus Pomponius Atticus. By marriage, she was also a great-niece to Quintus Tullius Cicero.

Lucius Licinius Crassus, sometimes referred to simply as Crassus Orator, was a Roman consul and statesman. He was considered the greatest orator of his day, most notably by his pupil Cicero. Crassus is also famous as one of the main characters in Cicero's work De Oratore, a dramatic dialogue on the art of oratory set just before Crassus' death in 91 BC.

Marcus Livius Drusus Claudianus was a senator of the Roman Republic. He was born with the name Appius Claudius Pulcher, into the patrician family of the Claudii. According to Suetonius, Drusus was a direct descendant of the consul and censor Appius Claudius Caecus. He was descended from Caecus via the first Appius Claudius Pulcher, who was consul in 212 BC and Caecus's great-grandson. His daughter Livia became the wife of the first Roman Emperor Augustus, and he was a direct ancestor of the Julio-Claudian emperors Tiberius, Caligula, Claudius and Nero not through this marriage, which produced no children, but through Livia's first marriage. 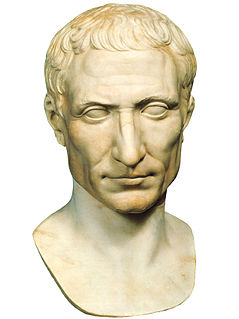 The Julii Caesares were the most illustrious family of the patrician gens Julia. The family first appears in history during the Second Punic War, when Sextus Julius Caesar was praetor in Sicily. His son, Sextus Julius Caesar, obtained the consulship in 157 BC; but the most famous descendant of this stirps is Gaius Julius Caesar, a general who conquered Gaul and became the undisputed master of Rome following the Civil War. Having been granted dictatorial power by the Roman Senate and instituting a number of political and social reforms, he was assassinated in 44 BC. After overcoming several rivals, Caesar's adopted son and heir, Gaius Julius Caesar Octavianus, was proclaimed Augustus by the senate, inaugurating what became the Julio-Claudian line of Roman emperors.

Aufidia or Alfidia was a woman of Ancient Rome. She was a daughter to Roman Magistrate Marcus Aufidius Lurco and an unknown mother. She was a member of the gens Aufidia, a Roman family of Plebs status which appeared in the Roman Republic and Roman Empire, and became a family of consular rank. Her father originally came from Fundi.

Marcus AufidiusLurco or known as Aufidius Lurco, was a Roman magistrate who lived in the 1st century BC. Lurco was a member of the gens Aufidia, a Roman family of plebeian status, who appeared in the Roman Republic and Roman Empire. They became a family of consular rank. Lurco originally came from Fundi.

The gens Helvia was a plebeian family at ancient Rome. This gens is first mentioned at the time of the Second Punic War, but the only member of the family to hold any curule magistracy under the Republic was Gaius Helvius, praetor in BC 198. Soon afterward, the family slipped into obscurity, from which it was redeemed by the emperor Pertinax, nearly four centuries later.