Before the Act, a number of "Penal laws" had been enacted in Britain and Ireland, which varied between the jurisdictions from time to time but effectively excluded those known to be Roman Catholics from public life.

Effect of the Act

By this Act, an oath was imposed, which besides a declaration of loyalty to the reigning sovereign, contained an abjuration of the Pretender, and of certain doctrines attributed to Roman Catholics, such as that excommunicated princes may lawfully be murdered, that no faith should be kept with heretics, and that the Pope had temporal as well as spiritual jurisdiction in Great Britain. [1]

Those taking this oath were exempted from some of the provisions of the Popery Act 1698. Although it did not grant freedom of worship, it allowed Catholics to join the army and purchase land if they took an oath of allegiance. [2] The section as to taking and prosecuting priests was repealed, as well as the penalty of perpetual imprisonment for keeping a school. Roman Catholics were also enabled to inherit and purchase land, nor was an heir who conformed to the Established church any longer empowered to enter and enjoy the estate of his "papist" kinsman. [3]

The passing of this act was the occasion of the Gordon Riots (1780) in which the violence of the mob was especially directed against Lord Mansfield, who had objected to various prosecutions under the statutes now repealed.

This Act remained on the statute book until it was repealed by the Promissory Oaths Act 1871 (c.48).

Abjuration is the solemn repudiation, abandonment, or renunciation by or upon oath, often the renunciation of citizenship or some other right or privilege. The term comes from the Latin abjurare, "to forswear".

In English history, penal law refers to a specific series of laws that sought to uphold the establishment of the Church of England against Protestant nonconformists and Catholicism by imposing various forfeitures, civil penalties, and civil disabilities upon these dissenters. The penal laws in general were repealed in the 19th century during the process of Catholic Emancipation. Penal actions are civil in nature and were not English common law.

The Test Acts were a series of English penal laws that served as a religious test for public office and imposed various civil disabilities on Roman Catholics and nonconformists. The principle was that none but people taking communion in the established Church of England were eligible for public employment, and the severe penalties pronounced against recusants, whether Catholic or nonconformist, were affirmations of this principle. In practice nonconformists were often exempted from some of these laws through the regular passage of Acts of Indemnity. After 1800 they were seldom enforced, except at Oxbridge, where nonconformists and Catholics could not matriculate (Oxford) or graduate (Cambridge). The Conservative government repealed them in 1828 with little controversy.

The Roman Catholic Relief Act 1829, passed by Parliament in 1829, was the culmination of the process of Catholic Emancipation throughout the United Kingdom. In Ireland it repealed the Test Act 1672 and the remaining Penal Laws which had been in force since the passing of the Disenfranchising Act of the Irish Parliament of 1728. Its passage followed a vigorous campaign that threatened insurrection led by Irish lawyer Daniel O'Connell. The British leaders, starting with the Prime Minister the Duke of Wellington and his top aide Robert Peel, although personally opposed, gave in to avoid civil strife. Ireland was quiet after the passage.

The Corporation Act of 1661 was an Act of the Parliament of England. It belonged to the general category of test acts, designed for the express purpose of restricting public offices in England to members of the Church of England.

The Popery Act 1698 was an Act of Parliament of the Parliament of England enacted in 1700. The long title of the Act is "An Act for the further preventing the Growth of Popery." 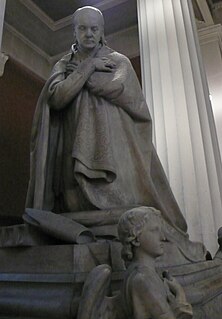 Daniel Murray was a Roman Catholic Archbishop of Dublin.

Francis Moylan (1735–1815) was the Roman Catholic Bishop of Cork, having first served as Bishop of Bishop of Ardfert and Aghadoe in Kerry.

The Roman Catholic Relief Bills were a series of measures introduced over time in the late eighteenth and early nineteenth centuries before the Parliaments of Great Britain and the United Kingdom to remove the restrictions and prohibitions imposed on British and Irish Catholics during the English Reformation. These restrictions had been introduced to enforce the separation of the English church from the Catholic Church which began in 1529 under Henry VIII.

The Accession Declaration Act 1910 is an Act which was passed by the Parliament of the United Kingdom to alter the declaration that the Sovereign is required to make at his or her accession to the throne as first required by the Bill of Rights of 1689. In it, he or she solemnly declares him or herself to be faithful to the Protestant faith. The altered declaration is as follows:

"I [here insert the name of the Sovereign] do solemnly and sincerely in the presence of God profess, testify, and declare that I am a faithful Protestant, and that I will, according to the true intent of the enactments which secure the Protestant succession to the Throne of my Realm, uphold and maintain the said enactments to the best of my powers according to law."

John Douglass (1743–1812) was an English Roman Catholic bishop who served as the Vicar Apostolic of the London District from 1790 until his death in 1812.

The Toleration Act 1688, also referred to as the Act of Toleration, was an Act of the Parliament of England, which received the royal assent on 24 May 1689.

The Recusancy referred to those who refused to attend services of the established Church of Ireland. The individuals were known as "recusants". The term, which derives ultimately from the Latin recusare, was first used in England to refer to those who remained within the Roman Catholic Church and did not attend services of the Church of England, with a 1593 statute determining the penalties against "Popish recusants".

The Catholic Committee or Catholic Convention was an organisation in 18th-century Ireland that campaigned for the rights of Catholics and for the repeal of the Penal Laws.