The name Parahiya is said to mean in the Gondi language the burners of the forest because they practice slash and burn agriculture. According to other traditions, the name is corruption of the word Paharia, which in Hindi means a hill dweller. They are one of a number of tribal communities such as the Panika that occupy the foothills of the Vindhya mountains. The community speak a dialect of Hindi. [1]

The habitat of most of the Parhiya is the hilly, undulating and extremely forested southern part of Sonbhadra district, at the foot of the Vindhya mountains. They are endogamous and divided into a number of exogamous clans known as kuris, of which the main ones are the Bengeha, Bhaloa, Bhania, Bhusan, Gohawa, Gurgur, Monnoor and Sira. Although they are Hindu, they also have a number of their own tribal deities such as Jawalamukhi Devi and Dharti Mata. [1]

The Parahiya depend on the forest for their subsistence. They are small landholding community. Hunting and gathering forest produce is an important source of their income. They collect roots, tubers, fruits, lacs and leaves, which they sell at the local market. They no longer engage in hunting as settled cultivation is now their occupation. [1]

The Government of Uttar Pradesh had classified them as a Scheduled Caste but by 2007, they were one of several groups that it had redesignated as Scheduled Tribes. [2] As of 2017, this designation applies only in Sonbhadra district, [3] as it also did at the time of the 2011 Census of India when the Parahiya Scheduled Caste population in Uttar Pradesh was 2446. [4] 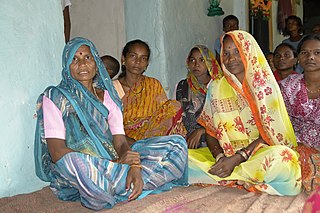 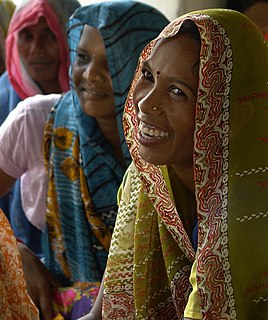 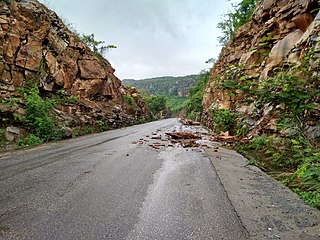 Sonbhadra or Sonebhadra is the second-largest district by area of Uttar Pradesh, India. Sonbhadra is the only district in India which borders four states namely Madhya Pradesh in west, Chhattishgarh in south, Jharkhand in south east and Bihar in the northeast. The district has an area of 6788 km² and a population of 1,862,559, with a population density of 270 persons per km². It lies in the extreme southeast of the state, and is bounded by Mirzapur District to the northwest, Chandauli District to the north, Kaimur and Rohtas districts of Bihar state to the northeast, Garhwa district of Jharkhand state to the east, Balrampur District of Chhattisgarh state to the south, and Singrauli district of Madhya Pradesh state to the west. The district headquarters is in the town of Robertsganj. 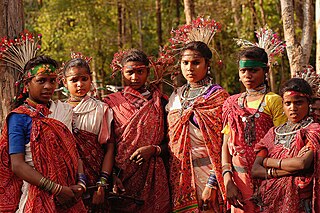 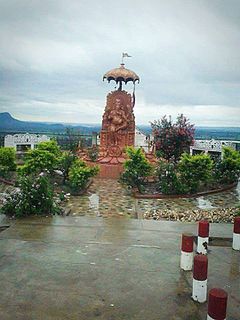 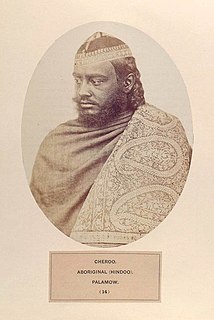 The Kotwar are a community found in the state of Uttar Pradesh in India. They are sub-group of the Panika caste. The word Kotwar is a corruption of kotwal, which means a keeper of the castle in Hindi. They are said to have acquired the name on account of the fact that they were traditionally village watchmen. The Panika were a caste traditionally associated with weaving, and the change of occupation by the Kotwar led to them becoming a distinct endogamous sub-group of the Panika.

The Bansphor are a Hindu caste found in the state of Uttar Pradesh, India. 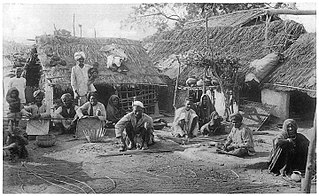 The Basor are a Hindu caste found in the state of Uttar Pradesh, India. They have scheduled caste status.

The Bhuiyar or Bhuyiar are a Hindu caste found in the Indian state of Uttar Pradesh. They have scheduled caste status and are also known as Beonria. The traditional occupation of the Bhuiyar caste is weaving but that has declined due to mechanisation.

The Ghasiya, or sometimes pronounced Ghasia are a Hindu caste found in the state of Uttar Pradesh in India. They are also known as Ghasiara and have Scheduled Caste status.

The Khairaha are a Hindu caste found in the state of Uttar Pradesh in India. They have Scheduled Caste status.

On 17 July 2019 ten tribals were gunned down in Ghorawal, Sonbhadra, Uttar Pradesh over a land dispute. The following day, the Scheduled Castes and Scheduled Tribes Commission of Uttar Pradesh asked the state government to invoke Gangster Act against the accused.