In sports, parity is when participating teams have roughly equivalent levels of talent. In such a league, the "best" team is not significantly better than the "worst" team. This leads to more competitive contests where the winner cannot be easily predicted in advance. The opposite condition, which could be considered "disparity" between teams, is a condition where the elite teams are so much more talented that the lesser teams are hopelessly outmatched.

Different major governing organizations attempt to achieve financial and/or competitive parity in different ways. For example, the National Football League (NFL) in the U.S. has established the shared revenue plan, in which all teams equally benefit from television revenue and sales of NFL franchised goods. All of the major leagues of North America use a draft system to ensure that the best prospects are allocated to the teams most in need of them. In much of the world outside North America, parity is enforced through promotion and relegation: the weakest teams in a league are forcibly expelled from the league and switch places with the best teams in a lower league.

Many[ who? ] consider the NFL to be the most "fair" or competitive league, with many different teams having a chance to win each year. In the NFL, complete parity would be a state where on any given Sunday, any given team can win any given game. The appearance of parity in the NFL may be something of an illusion; the New England Patriots, in particular, were noted for a prolonged dynasty in the 21st century under starting quarterback Tom Brady and head coach Bill Belichick that league policies failed to break up, while their division rivals, the Buffalo Bills, simultaneously suffered through a 17-season playoff drought (though the Bills may have been harmed by Buffalo's small market, high taxes, and poor reputation as a destination city). A franchise may struggle due to ineptitude in talent evaluation, coaching, player development, organizational structure, or overall team and player operations; a league with parity would, in theory, allow such struggling teams to identify and fix these issues while ensuring that a dynasty cannot take hold.

Expansion teams are among the most difficult to bring to parity. Especially in sports where team chemistry is an important factor in success, expansion team players (who consist mostly of cast-offs from other teams) must learn to work as a team before success happens, a process that can take years. Two notable exceptions were the Baltimore Stallions, who reached the Grey Cup in both their seasons in the Canadian Football League (winning the latter appearance); and the Vegas Golden Knights, who reached the Stanley Cup Finals in their inaugural season in the National Hockey League.

An example of disparity in sports is Portuguese Liga, the top-flight professional football (soccer) league in Portugal, where three clubs have accounted for 75 of the 77 championships in league history.

Salary cap limits set a maximum amount of money that may be spent on athletes' contracts. These limits exist to different extents in several other leagues as well. For example, Major League Baseball (MLB) in the U.S. does not have a cap, but charges a luxury tax beyond a certain level.

Another example of disparity would be demonstrated by the NBA from the 2014–15 NBA season to the 2017–18 NBA season, where the Golden State Warriors and Cleveland Cavaliers have been the only franchises to reach the NBA Finals during that specific time span and during the 2017 NBA finals and the 2018 NBA finals the Golden State Warriors won 8 out of the possible 9 finals games.

Prolonged disparity can be severely detrimental to a sports league. The All-America Football Conference collapsed in part because one of its teams, the Cleveland Browns, dominated the league throughout its four-year existence.

The AFL–NFL merger was the merger of the two major professional American football leagues in the United States at the time: the National Football League (NFL) and the American Football League (AFL). It paved the way for the combined league, which retained the "National Football League" name and logo, to become one of the most popular sports leagues in the United States. The merger was announced on the evening of June 8, 1966. Under the merger agreement, the leagues maintained separate regular-season schedules for the next four seasons—from 1966 through 1969—and then officially merged before the 1970 season to form one league with two conferences.

A draft is a process used in some countries and sports to allocate certain players to teams. In a draft, teams take turns selecting from a pool of eligible players. When a team selects a player, the team receives exclusive rights to sign that player to a contract, and no other team in the league may sign the player. The process is similar to round-robin item allocation.

There are 13 U.S. cities with teams from four major sports, where "city" is defined as the entire metropolitan area, and "major professional sports leagues" as:

An expansion team is a new team in a sports league, usually from a city that has not hosted a team in that league before, formed with the intention of satisfying the demand for a local team from a population in a new area. Sporting leagues also hope that the expansion of their competition will grow the popularity of the sport generally. The term is most commonly used in reference to the North American major professional sports leagues but is applied to sports leagues in other countries with a closed franchise system of league membership. The term refers to the expansion of the sport into new areas. The addition of an expansion team sometimes results in the payment of an expansion fee to the league by the new team and an expansion draft to populate the new roster.

A sports-related curse is a superstitious belief in the effective action of some power or evil, that is used to explain the failures or misfortunes of specific sports teams, players, or even cities. Teams, players, and cities often cite a "curse" for many negative things, such as their inability to win a sports championship, or unexpected injuries.

The Cleveland sports curse was a sports superstition involving the city of Cleveland, Ohio, and its major league professional sports teams, centered on the failure to win a championship in any major league sport for 52 years, from 1964 to 2016. Three major league teams based in Cleveland contributed to belief in the curse: the Browns of the National Football League (NFL); the Cavaliers of the National Basketball Association (NBA); and the Indians of Major League Baseball (MLB). 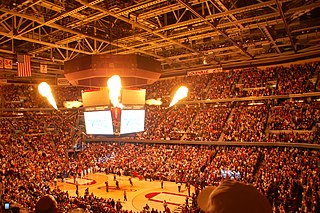 The expansion of the National Basketball Association has happened several times in the league's history since it began play in 1946. The most recent examples of the expansion of the NBA are the Charlotte Hornets and Miami Heat in 1988, Minnesota Timberwolves and Orlando Magic in 1989, Toronto Raptors and Vancouver Grizzlies in 1995, and New Orleans Pelicans in 2002.