Peccadillo Pictures is a UK-based film producer and distributor of art house, gay and lesbian, independent and world cinema. They have provided distribution for many films such as Weekend , Tomboy , XXY , Eyes Wide Open , Four Minutes , The Blossoming of Maximo Oliveros , Transylvania , Cockles and Muscles , Summer Storm , The Guest House and Chemsex .

Peccadillo Pictures is a distributor of gay and lesbian, art house, and world cinema - including films from Europe, Latin America and Asia: Presque Rien and Wild Side (2004 film) both by Sèbastien Lifshitz (France), 15 by Royston Tan (Singapore), Summer Storm by Marco Kreuzpaintner (Germany), El Mar by Augusti Villaronga (Spain), A Year Without Love by Anahi Berneri (Argentina), and Blue Gate Crossing by Chih-Yen Yee (Taiwan).

In October 2006 it released Be With Me by Eric Khoo (Singapore), and in 2007, it released The Blossoming of Maximo Oliveros by Auraeus Solito (Philippines), Beyond Hatred by Olivier Meyrou (France) and Transylvania by Tony Gatlif (France) and 4:30 by Royston Tan (Singapore).

2008 saw its widest release schedule to date, with XXY by Lucia Puenzo (Argentina), Saxon by Greg Loftin (UK), Avril by Gérald Hustache-Mathieu (France) and Last of the Crazy People by Laurent Achard (France).

In 2009 was released the first collection of DVD series Boys On Film .

In 2010 Peccadillo Pictures will release a variety films such as Highly Strung (French title Je te mangerais ) by Sophie Laloy, Give Me Your Hand (French title Donne-moi la main by Pascal-Alex Vincent), Eyes Wide Open by Haim Tabakman, and "Pornography: A Thriller" by David Kittredge as well as continuations of their short film compilations Boys on Film and Here Come the Girls including more mainstream actors such as Elliott Tittensor from Channel 4's Shameless.

In 2011, the company's warehouse in Enfield was burnt down in the 2011 London riots. All their stock/catalogue/films were destroyed. [1] [2]

The Boys on Film compilations

The compilation showcases ten short films and documentaries that deal with all aspects of modern gay life, created by various directors from around the world. These shorts tackle a wide range of contemporary topics - the pitfalls of online cruising, long distance lovers and growing old and gay gracefully.

Boys on Film 2: In Too Deep

The Here Come the Girls Compilations

This is a list of notable events in the history of LGBT rights that took place in the year 1970.

Despite having a flourishing Chinese and Malay film industry in the 1950s and 1960s, Singapore's film industry declined after independence in 1965. Film production increased in the 1990s, which saw the first locally-produced feature-length films. There were a few films that featured Singaporean actors and were set in Singapore, including Saint Jack, They Call Her Cleopatra Wong and Crazy Rich Asians. 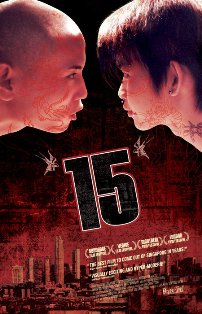 15 is a 2003 Singaporean coming-of-age black comedy-drama film about teenage gangsters in the Singapore suburbs. Directed by Royston Tan, the film is an expanded version of Tan's 2002 award-winning short film, also titled 15. It is one of the few Singaporean films to feature brief full-frontal male nudity, together with the Singaporean-Thai film Pleasure Factory and the Singaporean-Hong Kong film Bugis Street.

Juba Kalamka is an African American bisexual artist and activist recognized for his work and founding member of homohop group Deep Dickollective (D/DC) and his development of the micro-label sugartruck recordings.

Go Fish is a 1994 American drama film written by Guinevere Turner and Rose Troche and directed by Rose Troche. The film was a groundbreaking, hip, low-budget comedy that celebrated lesbian culture on all levels, and launched the career of director Troche and Turner. It premiered at the Sundance Film Festival in 1994, and was the first film to be sold to a distributor, Samuel Goldwyn, during that event for $450,000. The film was released during gay pride month in June 1994 and eventually grossed $2.4 million. Go Fish proved the marketability of lesbian issues for the film industry.

The Blossoming of Maximo Oliveros is a 2005 Filipino coming-of-age comedy-drama film directed by Aureaus Solito in his directorial debut, based on a screenplay by Michiko Yamamoto. Set in the slums of Manila, the film is about a gay teen who is torn between his love for a young cop and his loyalty to his family. The film stars Nathan Lopez in the title role, with JR Valentin, Soliman Cruz, Neil Ryan Sese, and Ping Medina in supporting roles.

XXY is a 2007 Argentine drama film written and directed by Lucía Puenzo and starring Ricardo Darín, Valeria Bertuccelli, Inés Efron and Martín Piroyansky. The film tells the story of a 15-year-old intersex person, the way her family copes with her condition and the ultimate decision that she must eventually make as she struggles to define her own gender identity within a society that expects certain behaviors from every individual.

Pink Apple is the biggest gay & lesbian film festival in Switzerland and takes place every springtime in Zürich and Frauenfeld.

J. T. Tepnapa is an American writer, producer, actor, and director. Tepnapa has made several short films since 2000 with his company, Blue Seraph Productions, but he is best known for his role as the first openly gay character, Lieutenant Commander Corey Aster, on the fan series Star Trek: Hidden Frontier created by Rob Caves.

Auraeus Solito, also known as Kanakan-Balintagos, is a Palawán-Filipino filmmaker and indigenous peoples rights advocate who comes from a lineage of shaman-kings from the Palawán tribe. He was one of the first to be born outside of his tribal land of South Palawan. He was born in the city of Manila and, after graduating from the Philippine Science High School, studied theater at the University of the Philippines, where he received a degree in Theater Arts. One of the leading independent filmmakers in the Philippines, he was chosen as part of in Take 100, The Future of Film in 2010. This book, published by Phaidon Press, New York, is a survey featuring 100 emerging film directors from around the world who have been selected by 10 internationally prominent film festival directors.

Asian Queer Film Festival (AQFF) is a film festival for LGBT audiences held in Tokyo, Japan. It screens only Asian films. The festival began in 2007 and is held every second year.

Boys on Film is a Peccadillo Pictures DVD series of independent LGBT-themed films.

For Dorian is a Canadian short drama film, directed by Rodrigo Barriuso and released in 2012. The film stars Ron Lea as Oliver Baum, the father of a child with Down syndrome who is struggling to come to terms with his son's sexual awakening as gay.