The pincer movement, or double envelopment, is a military maneuver in which forces simultaneously attack both flanks (sides) of an enemy formation.

The pincer movement typically occurs when opposing forces advance towards the center of an army that responds by moving its outside forces to the enemy's flanks to surround it. At the same time, a second layer of pincers may attack on the more distant flanks to keep reinforcements from the target units.

A full pincer movement leads to the attacking army facing the enemy in front, on both flanks, and in the rear. If attacking pincers link up in the enemy's rear, the enemy is encircled. Such battles often end in surrender or destruction of the enemy force, but the encircled force can try to break out. They can attack the encirclement from the inside to escape, or a friendly external force can attack from the outside to open an escape route.

Sun Tzu, in The Art of War (traditionally dated to the 6th century BC), speculated on the maneuver but advised against trying it for fear that an army would likely run first before the move could be completed. He argued that it was best to allow the enemy a path to escape (or at least the appearance of one), as the target army would fight with more ferocity when completely surrounded, but it would lose formation and be more vulnerable to destruction if shown an avenue of escape.

The maneuver may have first been used at the Battle of Marathon in 490 BC. The historian Herodotus describes how the Athenian general Miltiades deployed 900 Plataean and 10,000 Athenian hoplites in a U-formation, with the wings manned much more deeply than the centre. His enemy outnumbered him heavily, and Miltiades chose to match the breadth of the Persian battle line by thinning out the center of his forces while reinforcing the wings. In the course of the battle, the weaker central formations retreated, allowing the wings to converge behind the Persian battle line and drive the more numerous but lightly armed Persians to retreat in panic.

The tactic was used by Alexander the Great at the Battle of the Hydaspes in 326 BC. Launching his attack at the Indian left flank, the Indian king Porus reacted by sending the cavalry on the right of his formation around in support. Alexander had positioned two cavalry units on the left of his formation, hidden from view, under the command of Coenus and Demitrius. The units were then able to follow Porus's cavalry around, trapping them in a classic pincer movement. That tactically-astute move from Alexander was key in ensuring what many regard as his last great victory.

The most famous example of its use was at the Battle of Cannae in 216 BC, when Hannibal executed the maneuver against the Romans. Military historians view it as one of the greatest battlefield maneuvers in history and cite it as the first successful use of the pincer movement that was recorded in detail, [1] by the Greek historian Polybius.

Daniel Morgan used it effectively at the Battle of Cowpens in 1781 in South Carolina. Many consider Morgan's cunning plan at Cowpens the tactical masterpiece of the American War of Independence.

Zulu impis used a version of the manoeuvre that they called the buffalo horn formation.

Genghis Khan used a rudimentary form known colloquially as the horns tactic. Two enveloping flanks of horsemen surrounded the enemy, but they usually remained unjoined, leaving the enemy an escape route to the rear, as described above. It was key to many of Genghis's early victories over other Mongolian tribes.

Even in the horse-and-musket era, the maneuver was used across many military cultures. A classic double envelopment was deployed by the Asiatic conqueror Nader Shah at the Battle of Kirkuk (1733) against the Ottomans; the Persian army, under Nader, flanked the Ottomans on both ends of their line and encircled their centre despite being numerically at a disadvantage. In another battle at Kars in 1745, Nader routed the Ottoman army and subsequently encircled their encampment. The Ottoman army soon after collapsed under the pressure of the encirclement. Also during the famous Battle of Karnal in 1739, Nader drew out the Mughal army which outnumbered his own force by over six to one, and managed to encircle and utterly decimate a significant contingent of the Mughals in an ambush around Kunjpura village.

The manoeuvre was used in the blitzkrieg of the armed forces of Nazi Germany during World War II. Then, rather than a mere infantry maneuver, it developed into a complex, multidisciplinary endeavor that involved fast movement by mechanized armor, artillery barrages, air force bombardment, and effective radio communications, with the primary objective of destroying enemy command and control chains, undermining enemy troop morale and disrupting supply lines. During the Battle of Kiev (1941) the Axis forces managed to encircle the largest number of soldiers in the history of warfare. Well over half-a-million Soviet soldiers were taken prisoner by the end of the operation.

Blitzkrieg is a method of warfare where the attacker, spearheaded using a force concentration of armoured and motorised or mechanised infantry formations with close air support, breaks through the opponent's line of defence by short, fast, powerful attacks and then dislocates the defenders, using speed and surprise to encircle them with the help of air superiority. Through the employment of combined arms in manoeuvre warfare, blitzkrieg attempts to unbalance the enemy by making it difficult for it to respond to the continuously changing front, then defeat it in a decisive Vernichtungsschlacht. 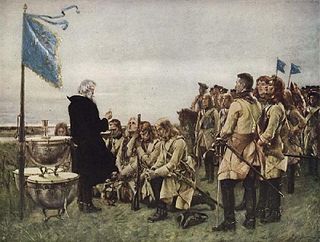 The 6th Army was a field army unit of the German Wehrmacht during World War II (1939–1945). It became widely remembered for its destruction by the Red Army at the Battle of Stalingrad in the winter of 1942–1943. It also acquired a reputation for the war crimes that it committed under the command of Field Marshal Walther von Reichenau during Operation Barbarossa.

A pocket refers to combat forces that have been isolated by opposing forces from their logistical base and other friendly forces. In mobile warfare, such as blitzkrieg, salients were more likely to be cut off into pockets, which became the focus of battles of annihilation.

Maneuver warfare, or manoeuvre warfare, is a military strategy that advocates attempting to defeat the enemy by incapacitating their decision-making through shock and disruption.

Encirclement is a military term for the situation when a force or target is isolated and surrounded by enemy forces. 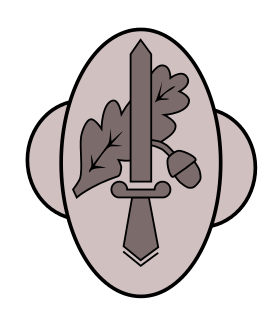 The 9th Army was a World War II field army. It was activated on 15 May 1940 with General Johannes Blaskowitz in command. 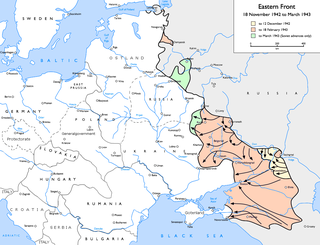 The Battle of Walaja was a battle fought in Mesopotamia (Iraq) in May 633 between the Rashidun Caliphate army under Khalid ibn al-Walid and Al-Muthanna ibn Haritha against the Sassanid Empire and its Arab allies. In this battle the Sassanid army is said to have been two times the size of the Muslim army. 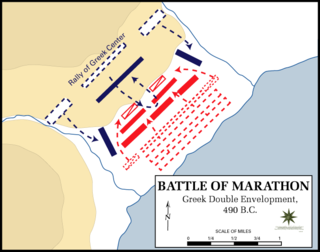 In military tactics, a flanking maneuver, or flanking manoeuvre is a movement of an armed force around a flank to achieve an advantageous position over an enemy. Flanking is useful because a force's offensive power is concentrated in its front. Therefore, to circumvent a force's front and attack a flank is to concentrate offense in the area where the enemy is least able to concentrate defense. 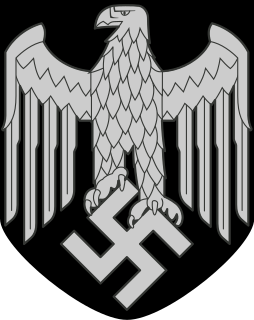 The German Army was the land forces component of the Wehrmacht, the regular German Armed Forces, from 1935 until it ceased to exist in 1945 and then formally dissolved in August 1946. During World War II, a total of about 13.6 million soldiers served in the German Army. Army personnel were made up of volunteers and conscripts.

Envelopment is the military tactic of seizing objectives in the enemy's rear with the goal of destroying specific enemy forces and denying them the ability to withdraw. Rather than attacking an enemy head-on as in a frontal assault an envelopment seeks to exploit the enemy's flanks, attacking them from multiple directions and avoiding where their defenses are strongest. A successful envelopment lessens the number of casualties suffered by the attacker while inducing a psychological shock on the defender and improving the chances to destroy them. An envelopment will consist of one or more enveloping forces, which attacks the enemy's flank(s), and a fixing force, which attacks the enemy's front and "fixes" them in place so that they cannot withdraw or shift their focus on the enveloping forces. While a successful tactic, there are risks involved with performing an envelopment. The enveloping force can become overextended and cut off from friendly forces by an enemy counterattack, or the enemy can counterattack against the fixing force.

The hammer and anvil is a military tactic involving the use of two primary forces, one to pin down an enemy, an the other to smash or defeat the opponent with an encirclement maneuver. It may involve a frontal assault by one part of the force, playing a slower-moving or more static role. The second phase involves a more mobile force that maneuvers around the enemy and attacks from behind or the flank to deliver a decisive blow. The "hammer and anvil" tactic is fundamentally a single envelopment, and is to be distinguished from a simple encirclement where one group simply keeps an enemy occupied, while a flanking force delivers the coup de grace. The strongest expression of the concept is where both echelons are sufficient in themselves to strike a decisive blow. The "anvil" echelon here is not a mere diversionary gambit, but a substantial body that hits the enemy hard to pin him down and grind away his strength. The "hammer" or maneuver element succeeds because the anvil force materially or substantially weakens the enemy, preventing him from adjusting to the threat in his flank or rear. Other variants of the concept allow for an enemy to be held fast by a substantial blocking or holding force, while a strong echelon or hammer, delivers the decisive blow. In all scenarios, both the hammer and anvil elements are substantial entities that can cause significant material damage to opponents, as opposed to light diversionary, or small scale holding units

The 327th Rifle Division was first formed in September 1941, as a standard Red Army rifle division, based on a cadre of workers from Voronezh. This formation was assigned to the Volkhov Front near Leningrad, toiling through the so-called "Rat's War" in the wooded swamps of that region and taking significant casualties in the encirclement of its 2nd Shock Army near Lyuban in early 1942. In January 1943, it helped to lead the partial raising of the German siege of Leningrad in Operation Iskra, distinguishing itself sufficiently to be redesignated as the 64th Guards Rifle Division. Well over a year later a second 327th Rifle Division was formed and was also moved to the Leningrad region where it took part in the offensive that drove Finland from the war, then spent the first months of 1945 clearing German forces from the coasts of the Baltic States and containing the German forces trapped in Courland.