In modern fencing, the piste or strip is the playing area. Regulations [1] [2] require the piste to be 14 metres long and between 1.5 and 2 metres wide. The last two metres on each end are hash-marked to warn a fencer before he/she backs off the end of the strip, after which is a 1.5 to 2 metre runoff. The piste is also marked at the centre and at the "en garde" lines, located two metres either side of the center line.

After each touch, fencers begin again at the en garde line, 4 metres apart, or if these lines are not available, roughly at a position where their blades can nearly touch when fully extended. If no touch is scored but play was halted, the fencers come en garde at the position they were stopped.

Most pistes at fencing tournaments are "grounded" to the scoring box, thus any hits that a fencer makes against the piste will not be registered as a touch.

There are three different types of piste:

Made from conductive material with a rubber back; lightweight, approximately 25 kg.

Made from sections of rolled aluminum which are bolted together; weighs approximately 300 kg

Made from woven metal with no backing; weighs approximately 70 kg 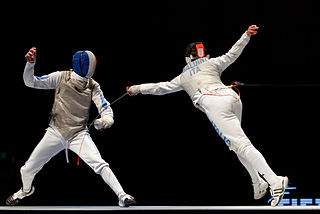 Sepak takraw, or kick volleyball, is a sport native to Southeast Asia. Sepak takraw differs from the similar sport of footvolley in its use of a rattan ball and only allowing players to use their feet, knee, chest and head to touch the ball. 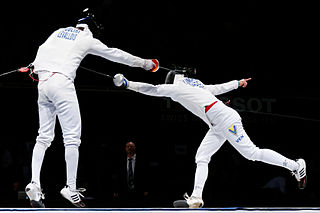