Plants for a Future

Plants For A Future (PFAF) is an online not for profit resource for those interested in edible and useful plants, with a focus on temperate regions. The organization's emphasis is on perennial plants.

PFAF is a registered educational charity with strong ethical principles and the following objectives: [1] 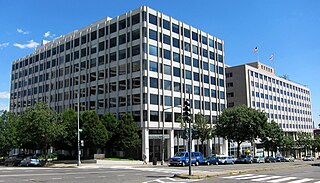 A charitable organization or charity is a non-profit organization whose primary objectives are philanthropy and social well-being.

The website contains an online database of over 8000 plants: 7000 that can be grown in temperate regions including in the UK, and 1000 plants for tropical situations. 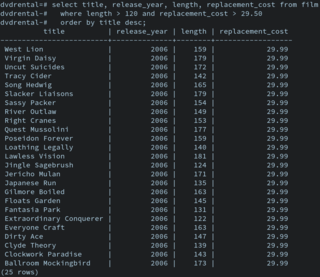 The database was originally set up by Ken Fern to include 1,500 plants which he had grown on his 28 acre research site in the South West of England.

Permaculture is a set of design principles centered on whole systems thinking simulating or directly utilizing the patterns and resilient features observed in natural ecosystems. It uses these principles in a growing number of fields from regenerative agriculture, rewilding, and community.

Forest gardening is a low-maintenance sustainable plant-based food production and agroforestry system based on woodland ecosystems, incorporating fruit and nut trees, shrubs, herbs, vines and perennial vegetables which have yields directly useful to humans. Making use of companion planting, these can be intermixed to grow in a succession of layers, to build a woodland habitat.

Robert Adrian de Jauralde Hart was an English pioneer of forest gardening in temperate zones. He created a model forest garden from a 0.12 acre (500 m²) orchard on his farm. He credits the inspiration for his work to an article by James Sholto Douglas, which was in turn inspired by the work of Toyohiko Kagawa.(page 41) 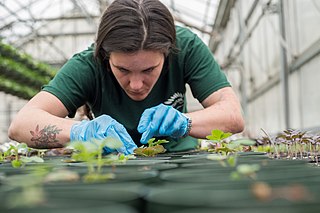 Horticulture has been defined as the culture of plants, mainly for food, materials, comfort and beauty. According to American horticulturist Liberty Hyde Bailey, "Horticulture is the growing of flowers, fruits and vegetables, and of plants for ornament and fancy." A more precise definition can be given as "The cultivation, processing, and sale of fruits, nuts, vegetables, and ornamental plants as well as many additional services". It also includes plant conservation, landscape restoration, soil management, landscape and garden design, construction and maintenance, and arboriculture. In contrast to agriculture, horticulture does not include large-scale crop production or animal husbandry.

William Robinson was an Irish practical gardener and journalist whose ideas about wild gardening spurred the movement that led to the popularising of the English cottage garden, a parallel to the search for honest simplicity and vernacular style of the British Arts and Crafts movement. Robinson is credited as an early practitioner of the mixed herbaceous border of hardy perennial plants, a champion too of the "wild garden", who vanquished the high Victorian pattern garden of planted-out bedding schemes. Robinson's new approach to gardening gained popularity through his magazines and several books—particularly The Wild Garden, illustrated by Alfred Parsons, and The English Flower Garden. 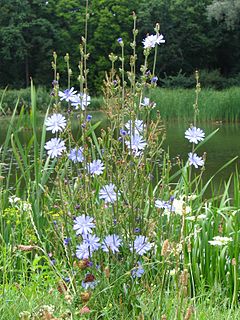 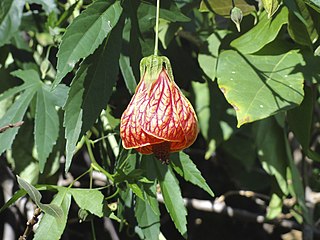 Abutilon pictum — syn. Abutilon striatum,(disputed) and commonly known as redvein abutilon, red vein Indian mallow, redvein flowering maple, Chinese-lantern or red vein Chinese lanterns, is a species of Abutilon in the family Malvaceae. It is native to southern Brazil, Argentina, Paraguay and Uruguay. The plant has become naturalised in Central America, and common in horticulture.

Kadsura japonica, commonly known as the kadsura vine or simply kadsura, is a plant species native to Japan in woodlands. The larvae of the moth Caloptilia kadsurae feed on K. japonica in the main Japanese islands and Ryukyu Islands. 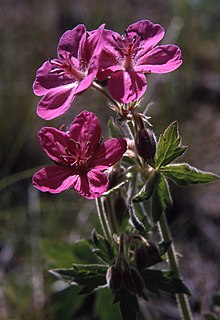 Geranium viscosissimum, commonly known as the sticky purple geranium, is a perennial in the Geraniaceae family of flowering plants. It is thought to be a protocarnivorous plant.

Perennial vegetables are vegetables that are perennial, meaning the plants can live for more than two years.

A horticultural flora, also known as a garden flora, is a plant identification aid structured in the same way as a native plants flora. It serves the same purpose: to facilitate plant identification; however, it only includes plants that are under cultivation as ornamental plants growing within the prescribed climate zone or region. Traditionally published in book form, often in several volumes, such floras are increasingly likely to be produced as websites or CD ROMs.

Hydrangea hirta that is commonly known as the "nettle-leaved hydrangea" is an endemic species that is native to Japan with ranges from its native country to East Asia. Within the conservation levels this species fits into species the least concerned category. Due to the beauty and sturdiness of the species flowers it can be found outside of its range due to being used for horticultural and landscaping purposes,and is found in gardens and landscapes in a wide variety of countries including the United Kingdom and the Eastern United States. As well as being a beautiful landscaping species for businesses and residential gardens alike, this species have been used in a wide array of research projects and studies that have been conducted at a variety of Universities in countries around the world including Japan, the United Kingdom, and the United States to name a few.

The Agroforestry Research Trust (ART) is a British charitable incorporated organisation that researches temperate agroforestry and all aspects of plant cropping and uses, with a focus on tree, shrub and perennial crops. It produces several publications and a quarterly journal, and sells plants and seeds from its forest gardens.

Betula alnoides is a species of birch that can be found in natural condition of such countries as Bhutan, Cambodia, China, India, Laos, Myanmar, Nepal, Thailand and Vietnam at an elevation of 300–2,100 metres (980–6,890 ft) and higher in some cases. The southernmost of all known birch species, whose natural range reaches approximately 12° N in Cardamom Mountains, Cambodia. 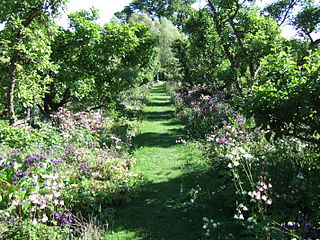 Climate-friendly gardening is gardening in ways which reduce emissions of greenhouse gases from gardens and encourage the absorption of carbon dioxide by soils and plants in order to aid the reduction of global warming. To be a climate-friendly gardener means considering both what happens in a garden and the materials brought into it and the impact they have on land use and climate. It can also include garden features or activities in the garden that help to reduce greenhouse gas emissions elsewhere. 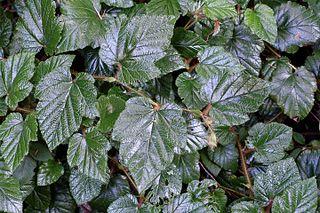 Vaccinium praestans or Vaccinium praestans - Lamb. or Kamchatka bilberry, is a perennial shrub in the family Ericaceae, which includes species like cranberries, blueberries, and huckleberries. In Russia this plant is known as the "Klopovka", or "the stink-bug berry," due to its distinct, potent scent, resembling that of a secretion produced by bugs of Heteroptera genus. The plant is native to Kamchatka but can be found in North America to Eastern Asia. Mostly growing in the wild, it is also enjoyed as an ornamental plant, most commonly in Japan, where it is used to decorate home gardens. Like many other species in the family Ericaceae, its berries are edible.