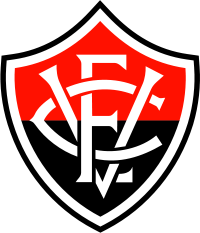 Esporte Clube Vitória, commonly referred to as Vitória, is a Brazilian professional club based in Salvador, Bahia founded on 13 May 1899. It competes in the Campeonato Brasileiro Série C, the third tier of Brazilian football, as well as in the Campeonato Baiano, the top flight of the Bahia state football league.

The OFC U-16 Championship is a biennial football tournament for players under the age of 16. The tournament decides the only two qualification spots for the Oceania Football Confederation (OFC) and its representatives at the FIFA U-17 World Cup, which is held every two years.

The South American U-17 Championship is a football competition held every two years for South American under-17 teams. The tournament was born in 1985 out of a need for a classification tournament for the newly created FIFA U-16 World Cup. For the first three editions, the competition was limited to under-16 teams. Afterwards, the age limit was raised one year. The tournament is held every two years. Since the first edition, Brazil has been the dominant force of the tournament, winning a record twelve times.

The United States U-17 men's national soccer team is controlled by the United States Soccer Federation. The highest level of competition in which the team may compete is in the FIFA U-17 World Cup, which is held every two years.

The Thailand national under-17 football team is the national team for the under-17 and 16 level, representing Thailand in international football competitions in the FIFA U-17 World Cup, AFC U-16 Championship and AFF U-16 Championship. It is controlled by the Football Association of Thailand.

The Brazil national under-17 football team, also known as Brazil Under-17s or Seleção Sub-17, represents Brazil in association football, at an under-17 age level and is controlled by the Brazilian Football Confederation, the governing body for football in Brazil. Their head coach is Phelipe Leal.

The Scotland national under-16 football team represents Scotland in international football at the under-16 age level. It is controlled by the Scottish Football Association, the governing body for football in Scotland.

The Soviet national youth football team was a special under-18 and under-20 football team of the Soviet Union designated specifically for FIFA World Youth Championship. It ceased to exist on the breakup of the Union.

The Portugal national youth football team are the national under-23, under-21, under-20, under-19, under-18, under-17, under-16 and under-15 football teams of Portugal and are controlled by the Portuguese Football Federation. The youth teams of Portugal participate in tournaments sanctioned by both FIFA and UEFA and also participates in world, regional, and local international tournaments.