In ice hockey, power forward (PWF) is a loosely applied characterization of a forward who is big and strong, equally capable of playing physically or scoring goals and would most likely have high totals in both points and penalties. [1] It is usually used in reference to a forward who is physically large, with the toughness to dig the puck out of the corners, possesses offensive instincts, has mobility, puck-handling skills, [2] [3] may be difficult to knock off the puck or to push away from the front of the goal [4] and willingly engage in fights when he feels it is required. [5] Possessing both physical size and offensive ability, power forwards are also often referred to as the 'complete' hockey player. [6] [7]

Historically, power forward was not originally a hockey term, finding comparatively recent origins from basketball. [8] [9] Harry Sinden, former president of the Boston Bruins, claims power forward first became part of hockey terminology because of the style of play of Cam Neely, an NHL player from 1983 to 1996, who could play ruggedly and also score goals. [7] [10] 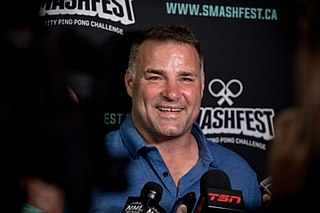 Eric Bryan Lindros is a Canadian former professional ice hockey player. Lindros was born in London, Ontario, but grew up in Toronto. He played junior hockey in the Ontario Hockey League (OHL) for the Oshawa Generals prior to being chosen first overall in the 1991 NHL Entry Draft by the Quebec Nordiques. He refused to play for the Nordiques and was eventually traded to the Philadelphia Flyers in June 1992 in exchange for a package of players and draft picks including Peter Forsberg. During his OHL career, Lindros led the Generals to a Memorial Cup victory in 1990. Prior to being drafted in 1991, Lindros captured the Red Tilson Trophy as the Most Outstanding Player in the OHL, and also was named the CHL Player of the Year.

In ice hockey, a Gordie Howe hat trick is a variation on the hat-trick, wherein a player scores a goal, records an assist and gets in a fight all in one game. It is named after Hall of Famer Gordie Howe, who is known as "Mr. Hockey", because he is considered the most well rounded hockey player of all time. Howe could both set up and score goals, but also do everything well from killing penalties, back checking, and even fighting, when necessary.

John Clark LeClair is an American former professional ice hockey player who played 16 seasons in the National Hockey League (NHL) with the Montreal Canadiens, Philadelphia Flyers, and Pittsburgh Penguins. With the Flyers, LeClair became the first American-born player to score 50 goals in three consecutive NHL seasons while playing on the Legion of Doom line with Eric Lindros and Mikael Renberg. LeClair was a member of the Montreal Canadiens' Stanley Cup winning team in 1993.

Brendan Frederick Shanahan is a Canadian professional ice hockey executive and former player who currently serves as the president and alternate governor for the Toronto Maple Leafs, having previously served as the director of player safety for the National Hockey League (NHL). Originally drafted by the New Jersey Devils second overall in the 1987 NHL Entry Draft, Shanahan played in the NHL with the New Jersey Devils, St. Louis Blues, Hartford Whalers, Detroit Red Wings, and New York Rangers.

Richard Tocchet is a Canadian professional ice hockey coach and former player. He currently serves as the head coach of the Arizona Coyotes of the National Hockey League (NHL). Playing as a right winger, he played 18 seasons in the National Hockey League (NHL) for the Philadelphia Flyers, Pittsburgh Penguins, Los Angeles Kings, Boston Bruins, Washington Capitals and Phoenix Coyotes. He was the head coach of the Tampa Bay Lightning for two seasons. During the 2010 playoffs he served as an analyst on Flyers Postgame Live on Comcast SportsNet. 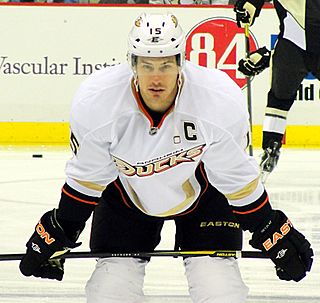 Ryan Getzlaf is a Canadian professional ice hockey centre who currently serves as captain of the Anaheim Ducks of the National Hockey League (NHL). A first round selection, 19th overall, at the 2003 NHL Entry Draft, Getzlaf has played his entire professional career in the Ducks organization and ranks as one of the franchise's all-time leading scorers. He has played in three NHL All-Star Games and was a member of the Ducks' 2007 Stanley Cup championship team. A playmaker and power forward, Getzlaf has led the Ducks in assists seven times, including a franchise record of 66 in 2008–09.

Craig Harlan Janney is an American former professional ice hockey center who played twelve seasons in the National Hockey League from 1987–88 until 1998–99, when blood clots ended his career prematurely.

Mike Legg is a Canadian former ice hockey player. He is most famous for a goal he scored while playing for the University of Michigan, in a 1996 NCAA Tournament game against the University of Minnesota, in which he picked the puck up onto his stick behind the net and wrapped it around into the top corner of the net. The goal was widely recognized around the hockey world; Legg was awarded "Goal of the Year" by Inside Hockey and the stick he used was donated to the Hockey Hall of Fame. This move is often referred to as a 'Michigan,' and has since been attempted by many other players, including Ryan Getzlaf and Tyler Ennis. The first successful NHL attempt of this move came from Andrei Svechnikov of the Carolina Hurricanes, scoring against Calgary Flames goaltender David Rittich. Svechnikov managed the feat a second time against the Winnipeg Jets, scoring on goaltender Connor Hellebuyck. Legg originally learned it from Bill Armstrong.

Rory "Scott" Daniels is a Mistawasis First Nation aboriginal, and a Canadian former professional ice hockey player. Daniels was nicknamed "Chief" by his teammates due to his full-blooded Cree Indian background. At the age of 17, Daniels started his hockey career in the Western Hockey League (WHL) playing left wing for the Kamloop Blazers in 1986, and continued to play in the WHL for the New Westminster Bruins and then the Regina Pats until 1990. Daniels was the 136th draft pick overall, for the Hartford Whalers, in 1989, but did not play his first National Hockey League (NHL) game until 1993. Daniels stood out to his coaches in his debut game by accumulating nineteen minutes in penalties however, he continued to play in the American Hockey League (AHL) for the Springfield Indians until his second NHL game, in the 1994-95 season, again for the Hartford Whalers. In 1996 Daniels was traded to the Philadelphia Flyers, and later to the New Jersey Devils in 1997 where he played for two years before retiring from the NHL. Daniels currently resides in Agawam, Massachusetts, with his family. 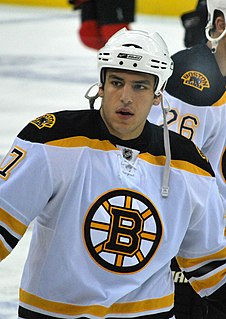 Milan Lucic is a Canadian professional ice hockey left winger for the Calgary Flames of the National Hockey League (NHL). He played major junior hockey with the Vancouver Giants in the Western Hockey League (WHL) for three seasons and captured a Memorial Cup, while being named tournament MVP in 2007. He was selected 50th overall in the 2006 NHL Entry Draft and made the Boston Bruins' roster as a 19-year-old in 2007–08. Three years later, he won a Stanley Cup with the Bruins. He spent the first eight seasons of his NHL career with Boston prior to being traded to the Los Angeles Kings in June 2015, then signing as a free agent with the Edmonton Oilers in July 2016.

The 1992–93 Philadelphia Flyers season was the team's 26th season in the National Hockey League (NHL). The Flyers added Eric Lindros in a blockbuster trade, but the team failed to make the Stanley Cup playoffs for the fourth-straight season.

The Trio Grande was a line of professional ice hockey forwards who played together for the New York Islanders from the late 1970s through the early 1980s. The line consisted of Hall of Famers Bryan Trottier at center, Clark Gillies at left wing and Mike Bossy at right wing.

The 2009–10 Philadelphia Flyers season was the Flyers' 43rd season in the National Hockey League (NHL).

The following is a list of all suspensions and fines enforced in the National Hockey League during the 2010–11 NHL season. It lists which players or coaches of what team have been punished for which offense and the punishment, in the monetary sense of the word, they received.

The 2011–12 Buffalo Sabres season was the 42nd season of operation for the National Hockey League franchise that was established on May 22, 1970. Their season began October 7, 2011 against the Anaheim Ducks in Helsinki, where the team named Jason Pominville the 13th full-time captain in team history. Pominville filled the vacancy left by Craig Rivet, who was claimed via waivers by the Columbus Blue Jackets during the previous season.

The Bruins–Flyers rivalry is a National Hockey League (NHL) rivalry between the Boston Bruins and Philadelphia Flyers ice hockey clubs. Both teams compete in the Eastern Conference, but Boston plays in the Atlantic Division and Philadelphia plays in the Metropolitan Division. The two teams have been rivals since the Flyers inception in the 1967 expansion, but was most intense in the 1970s when the two teams met in four playoff series, including the 1974 Stanley Cup Finals, with the Flyers beating the heavily favored Bruins. The rivalry was renewed in the 2010s with both teams meeting in the playoffs for two consecutive years, including a 2010 series, with the Flyers overcoming a 3 games to none deficit to win the series. Historically, both franchises are renowned for their toughness and brawling ways, with the Bruins famously nicknamed the Big Bad Bruins, and the Flyers also famously nicknamed the Broad Street Bullies.

The 2019 Stanley Cup Finals was the championship series of the National Hockey League's (NHL) 2018–19 season and the culmination of the 2019 Stanley Cup playoffs. The Western Conference champion St. Louis Blues defeated the Eastern Conference champion Boston Bruins four games to three to win their first championship, in their 51st season of play, ending the third longest championship drought in league history. The Bruins had home-ice advantage in this best-of-seven playoff series with the better regular season record. The series began on May 27 and concluded on June 12. The Blues' Stanley Cup–winning run of 26 playoff games tied the 2014 Los Angeles Kings for the longest of any Stanley Cup–winning team in history.

The 2019–20 NHL season is the 103rd season of operation of the National Hockey League. 31 teams are competing in an 82-game regular season. The regular season began on October 2, 2019, and will end on April 4, 2020. The 2020 Stanley Cup playoffs will begin a few days afterwards, with the Stanley Cup Finals held in late May and early June. The entire schedule was released on June 25, 2019.