Pukka Pies is a manufacturer of pies based in Syston, Leicestershire, United Kingdom.

According to the company, the favourite pie flavours in the Merthyr Tydfil based upon its sales, are: [3]

A pastiche of Pierre-Auguste Renoir's painting Le Déjeuner des Canotiers hangs in the reception at the headquarters, with the original characters replaced by members of the Storer family. [1]

Pukka Pies are most commonly seen for sale in chip shops, stadiums, butchers, cafes and pubs across the country. In 2008 the company started selling its pies in UK supermarkets for the customer to heat up at home.

A family company founded in 1963 by Trevor Storer and Valerie Storer as "Trevor Storer's Home Made Pies", it was named Pukka Pies in 1964. Today, the business is called Pukka. It is currently run by Trevor and Valerie's sons, Tim and Andrew, and employs 360 people at its bakery in Syston, producing 180,000 pies and pasties per day. Millmoor, then the home ground of Rotherham United F.C., was the first sporting venue where Pukka Pies were sold. Rotherham United's supporters hold the record for the most pies consumed at a football match, with a consumption 40% above the Football League average. [4]

Several workers at the bakery posed for a nude calendar for 2006, in order to raise money for the Tsunami Appeal and the NSPCC. [5]

The company sponsored the 2009 UK Snooker Championship, [8] and the winner, China's Ding Junhui, was awarded his body weight in meat pies, 276 to match his 69 kg weight. He later announced that he would donate all the pies to Homeless and Roofless at Christmas (HARC), a Sheffield-based charity. [9]

A sausage roll is a savoury pastry snack, popular in Commonwealth nations. They are sold at retail outlets and are also available from bakeries as a take-away food. A miniature version can be served as buffet or party food. Similar meat and pastry recipes include the Czech klobásník, the Dutch saucijzenbroodje, the German Münsterländer Wurstbrötchen and sausage bread in the United States.

A pasty is a baked pastry, a traditional variety of which is particularly associated with Cornwall, United Kingdom. It is made by placing an uncooked filling, typically meat and vegetables, on one half of a flat shortcrust pastry circle, folding the pastry in half to wrap the filling in a semicircle and crimping the curved edge to form a seal before baking.

Quorn is a meat substitute product originating in the UK and sold primarily in Europe, but is available in 18 countries. Quorn is sold as both a cooking ingredient and as the meat substitute used in a range of prepackaged meals. 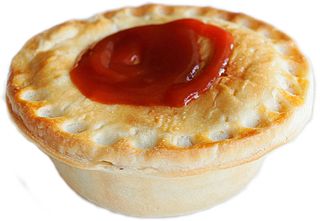 An Australian or New Zealand meat pie is a hand-sized meat pie containing diced or minced meat and gravy, sometimes with onion, mushrooms, or cheese and often consumed as a takeaway food snack. 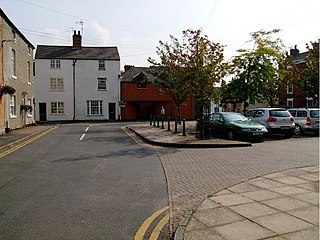 Meat and potato pie is a popular variety of pie eaten in England. Meat and potato pie comes in many versions and consists of a pastry casing containing: potato, either lamb or beef, and sometimes carrot and/or onion. They can often be bought in a speciality pie shop, a type of bakery concentrating on pies, or in a chip shop. A meat and potato pie has a similar filling to a Cornish Pasty and differs from a meat pie in that its content is usually less than 50% meat. They can be typically eaten as take-aways but are a homemade staple in many homes. Often it is served with red cabbage.

Greggs plc is the largest bakery chain in the United Kingdom. It specialises in savoury products such as bakes, sausage rolls and sandwiches and sweet items including doughnuts and vanilla slices. It is headquartered in Newcastle upon Tyne, England. It is listed on the London Stock Exchange, and is a constituent of the FTSE 250 Index.

Ginsters is a company based in Callington in Cornwall, in the south-west of England. The biggest selling pasty maker in the UK, it specialises in making mass-produced pasties, sausage rolls, sandwiches, pasta bowls and other savoury snacks.

Patties Foods, is an Australian food manufacturing company that produces meat pies, baked goods, frozen fruits, and pre-made desserts. Patties Foods is represented in the Australian market by the Four'n Twenty, Patties, Herbert Adams, Nanna's, Chefs Pride, Boscastle and Snowy River brands. Patties is the largest Meat pie producing company in Australia, and the world. They are the producers of several well-known Meat pies, including the Patties, Snowy River pie, Herbert Adams pie, and as of 2003, Four'n Twenty pies. Patties Foods is headquartered in Bairnsdale, Victoria.

There are many geographically indicated foods of the United Kingdom. In British cuisine, there is a custom of naming foodstuffs with reference to their place of origin. However, there are other reasons for this practice; Scotch egg, which was invented in London and Dover sole which indicates where they were landed, for example.

Holland's Pies is a manufacturer of pies and puddings based in Baxenden, near Accrington in Lancashire, England. Owned by 2 Sisters Food Group, the company also produces pasties and sausage rolls.

Palethorpe's is a British producer of cooked meat and pastry products and was particularly well known for its branded sausages. Founded in 1852, it was bought by the Bibby Group in 1969 and then by Haverhill Meat Products before becoming part of the Northern Foods Chilled Foods division in 1991. Palethorpes is now part of Pork Farms. 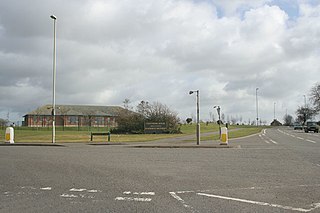 Samworth Brothers is a British food manufacturer which produces a range of chilled and ambient foods, both own-label and branded. It is the owner of Cornish pasty maker Ginsters and malt loaf manufacturer Soreen, and is also known as a maker of certified Melton Mowbray pork pies.

Ferguson Plarre Bakehouses is a family owned and operated bakery business based in Melbourne, Australia. The business began as two separate entities with the families coming together to form Ferguson Plarre Bakehouses in 1980. Ferguson Plarre now has 76 stores across Victoria. In 2012, members of the Plarre family bought out the Ferguson's stake and it is now owned by Ralph Plarre (40%), Steve Plarre (25%), Mike Plarre (25%) and their independent chairman, Rod Douglas (10%). Steve Plarre is CEO.

Saxby Bros Limited was a food manufacturing company based in Wellingborough, Northamptonshire, who manufactured pork pies, delicatessen, meat and pastry products. In 2007, the company was taken over by General Mills, which led to its closure a year later. The factory is now demolished and redeveloped for housing.

"Pasty tax" was a popular phrase used by the British press to describe a proposal in the 2012 United Kingdom budget to simplify the tax treatment of "hot takeaway food" so that Value Added Tax (VAT) would be charged at 20% in all cases. The change would have increased the sale price of hot snacks such as sausage rolls and Cornish pasties sold on the premises where they were baked. The Chancellor of the Exchequer, George Osborne delivered the proposal of the so-called "March Budget".

John Hemmingham is an association football supporter and football administrator from Sheffield, England. He is best known as the leader and trumpet player of the Pukka Pies England Band. Hemmingham first started playing music at football in 1993 with Sheffield Wednesday fans. In 1996, he was invited to play at England national football team matches. He has since played at other sporting events including the Olympics and boxing matches.

Trevor Storer was a British businessman and founder of the Pukka Pies company in 1963, which was originally called Trevor Storer's Home Made Pies. He was the author of Bread Salesmanship, which became the training manual for Allied Bakeries in the 1960s. Originally making his pies in his own home, he built the company up until retiring at the age of 65, but remained chairman until his death. As of his time of his death, the company turned over £40 million a year.