The novel was previously adapted into a 1970 Danish film.

American Henry Miller enjoys a wide variety of sexual escapades while also working hard to establish himself as a serious writer in Paris.

Clichy may refer to: 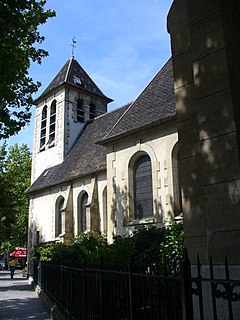 Ménilmontant is a neighbourhood of Paris, situated in the city's 20th arrondissement. It is roughly defined as the area north of the Père Lachaise Cemetery, south of Parc de Belleville, and between Avenue Jean-Aicard on the west and Rue Pelleport on the east. The neighborhood includes an 87 m high hill, making it the third-highest neighborhood in Paris.

Margit Evelyn Newton is a South Tyrolean Italian actress who appeared in fourteen films between 1979 and 1990. At times billed as Margie Newton, she also received billing, at various points in her career, as Margie Moreau, Margi Eveline Newton and Margi Evelyn Newton.

Jean Rabier was a French cinematographer who frequently worked with director Claude Chabrol. He had almost 70 film credits spanning a career from 1961–1991.

Quiet Days in Clichy, is a Danish film released in 1970 which was written and directed by Jens Jørgen Thorsen. Set in Paris, it features music by Country Joe McDonald and Ben Webster. Drawn from the semi-autobiographical 1956 novel by Henry Miller, updated from the 1930s to the 1960s, it gives reflections on and incidents in the lives of two young men sharing an apartment. The amount of nudity, sexual activity and crude language in the film has restricted its public showing in many countries.

Quiet Days in Clichy may refer to:

Giuditta del Vecchio is an Italian actress, known for her roles in the 1992 Canadian film Léolo and the 1996 Italian film The Nymph. Del Vecchio is featured prominently on the cover of the 1996 re-release of the album Tiger Bay by the English band Saint Etienne.