Denktaşwas born in Paphos to judge Raif Mehmet Bey and Emine Hanim,Turkish Cypriots. He graduated from The English School,Nicosia in Cyprus. Following his graduation he worked as a translator in Famagusta after that as a court clerk and then as a teacher for one year in the English School. He later went to Istanbul and London, [1] training first as a teacher and then as a barrister at Lincoln's Inn. He graduated in 1947 and returned home to practice law.

In 1948 Denktaşserved as a member of the Consultative Assembly in search of self-government for Cyprus and became a member of the Turkish Affairs Committee. He was a crown prosecutor 1949–1958.

In 1957,Denktaşplayed the lead role in the founding of the Turkish Resistance Organization (TMT),which was formed to resist EOKA's struggle to proclaim Enosis (union with Greece) and worked for the partition of Cyprus. In 1958,he attended the U.N. General Assembly on behalf of the Turkish-Cypriots,and in December of that year he advised the Turkish Government on the rights of Turkish Cypriots during the preparation of the London and Zurich Agreements (signed 19 February 1959). In 1960,Cyprus won independence from Britain,and the Republic of Cyprus was established. Denktaşwas elected as the President of the Turkish Communal Chamber. [6]

In November 1963 President Makarios gave for review to Turkey,Greece and Britain a document with a series of constitutional amendments designed to loosen the acquired rights of Turkish Cypriots in the name of "the workings of the state". Then the paramilitary action against the Turks began in December 1963,after which Turkish-Cypriots forcefully withdrew from government. Upon these events,Denktaşwent to Ankara for consultations with the Turkish government. His reentry to the island was prohibited by the Greek-Cypriot leadership in years 1964–68 due to his involvement with TMT. In the 1973 vice presidential elections he replaced Fazıl Küçük. [7]

After the 15 July 1974 Greek ultra-nationalist military coup in Cyprus,fearing for the safety of the Turkish Cypriot population,Turkey unilaterally invaded by landing troops on the north coast of Cyprus. During the military operation,the dictatorship led by Nikos Sampson fell and political wrangling began. After three weeks,Turkey continued to advance military operation. The Turkish Army took control of 37% of the island by the time it completed its second advance on 14 August 1974 and reached Famagusta. Denktaşwas subsequently elected speaker of the legislature in 1975, [6] and then President of the Turkish Federated State of Cyprus in 1976 and for a second term in 1981.

The TRNC has not been recognised by any state other than Turkey. Denktaşhad been the chief negotiator of Turkish Cypriots in the United Nations sponsored peace talks since 1968.

By 2000,the desire of both Cyprus and Turkey to join the EU led to renewed efforts to reach a settlement. In 2002 there were large demonstrations in northern Cyprus by Turkish Cypriots demanding reunification of the island,which would give them EU citizenship when Cyprus joined the EU in 2004.

In February 2004 Denktaşembarked on a new round of UN sponsored talks with the Greek Cypriots,aimed at re-uniting Cyprus. Ultimately,as did the Greek Cypriot President Tassos Papadopoulos,he opposed the final version of the settlement proposal drafted under the authority of the UN Secretary General Kofi Annan (the Annan Plan),which was voted on by the two Cypriot communities in a referendum on 24 April 2004. The plan was accepted by 65% of the Turkish community,but was rejected by a vast majority of the Greeks.

On 14 May 2004,Denktaşannounced he would not be standing for a fifth term as President of the TRNC in the next election. His tenure as President came to an end following the 17 April 2005 election of Mehmet Ali Talat,who formally assumed office on 25 April. [9]

Denktaş's favourite pastimes included photography and writing. His photographs have been exhibited in the United States,the United Kingdom,Australia,Italy,some of the former republics of the Soviet Union,Poland,France,Austria and Turkey. He has written about fifty books in English and Turkish. Between the years 1949 and 1957 he wrote many articles for the newspaper Halkın Sesi ("Voice of the People"),published by Fazıl Küçük,the first Vice President of the Republic of Cyprus.[ citation needed ]

Denktaşhas been the recipient of many awards and honorary doctorates given by various universities in Turkey,Northern Cyprus and the United States. He was married to Aydın Denktaş(1933–2019) for 63 years and had three sons and three daughters. He lost a daughter at the age of three,one son,Raif in a traffic accident and another son in a tonsillectomy. His surviving son Serdar Denktaş is also a politician,and as of 2019,leader of the Turkish Cypriot Democratic Party. [10]

Denktaş's health gradually deteriorated throughout the 2000s. [11] He had a heart condition and on 25 May 2011 suffered a stroke. [2] He died on 13 January 2012 of multiple organ failure at the Near East University Hospital in Nicosia. [2] [11] Northern Cyprus declared declared seven days' mourning, [12] while Turkey declared five days'. [13] His funeral,which thousands attended,was held on 17 January. He was buried in the Cumhuriyet Park ("Park of the Republic"). [14]

Note: The translations of the titles in Turkish is not necessarily the actual English title 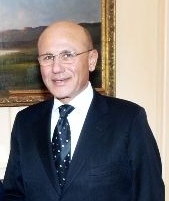 Mehmet Ali Talat is a Turkish Cypriot politician who served as the President of Northern Cyprus from 2005 to 2010. Talat is the leader of the social democratic Republican Turkish Party, having previously held this position between 1996 and 2005. He became prime minister in 2004, and subsequently won the presidential election held on 17 April 2005. Talat was inaugurated on 25 April 2005, succeeding retiring leader Rauf Denktaş. He lost the presidential election of 2010 and was replaced by Derviş Eroğlu as President.

Serdar Denktaş is son of Rauf Denktaş, the former President of the de facto Turkish Republic of Northern Cyprus.

This article covers the civilian casualties and displacements that occurred between 1963 and 1975 – from the outbreak of the intercommunal fighting until the end of displacements following the Turkish invasion of Cyprus. 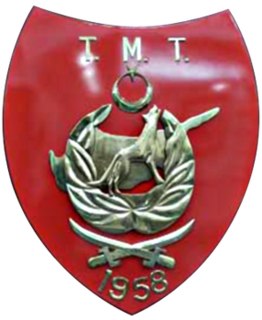 The Turkish Resistance Organisation was a Turkish Cypriot pro-taksim paramilitary organisation formed by Rauf Denktaş and Turkish military officer Rıza Vuruşkan in 1958 as an organisation to counter the Greek Cypriot Fighter's Organization EOKA. The name of the organization was changed twice. In 1967 to "Mücahit", and became the Security Forces Command in 1976.

Fazıl Küçük was a Turkish Cypriot politician who served as the first Vice President of the Republic of Cyprus.

The Battle of Tillyria or Battle of Kokkina, also known as Erenköy Resistance, was a conflict in August 1964 between units of the Cypriot National Guard and Turkish Cypriot armed groups in Kokkina area of Cyprus. The latter were supported with air strikes from Turkey. 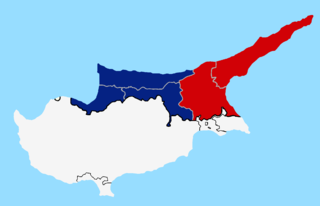 Mustafa Akıncı is a Turkish Cypriot politician who was the President of Northern Cyprus from April 2015 until October 2020.

Cumhuriyet Park is a park in the Gönyeli quarter of North Nicosia. It is the resting place of Rauf Denktaş, the founder of Northern Cyprus, and is an important tourist attraction.

Raif Denktaş was a Turkish Cypriot composer, politician, academic, journalist and writer. He died after a controversial car accident where his car collided with a military vehicle.

Once Upon a Time in Cyprus is a Turkish historical television drama series broadcast by TRT 1. It is set in 1960s Cyprus, and is based on the story of Turkish Cypriots' resistance against the extremist Greek Cypriot organisation EOKA-B whose activities were reported in the United Nations General Assembly on November 12, 1956. The series will explore all human rights incidents caused by EOKA-B that unfolded from Bloody Christmas until the Turkish invasion of Cyprus in 1974.