The Robin HR100 is a French four-seat light monoplane, designed by Chris Heintz [1] and built by Avions Pierre Robin as metal-winged version of the Robin DR253 Regent.

The prototype of the Robin HR100 was the prototype DR253 Regent which was rebuilt with metal wings and powered by a 180 hp (134 kW) Lycoming O-360 engine. It first flew on 3 April 1969 as the Robin HR100/180. The HR100 is a low-wing cantilever monoplane with a conventional cantilever tail unit and a fixed tricycle landing gear. A number of different variants were produced in the 1970s. From 1972 a high-powered improved version was produced as the HR100/285 with a 285 hp (213 kW) Continental Tiara 6-285B engine and retractable landing gear and airframe modifications.

The French Air Force ordered a number of HR.100/250 aircraft in the mid 1970s and these were used for communications and other duties.

The Piper PA-18 Super Cub is a two-seat, single-engine monoplane. Introduced in 1949 by Piper Aircraft, it was developed from the Piper PA-11, and traces its lineage back through the J-3 to the Taylor E-2 Cub of the 1930s. In close to 40 years of production, over 10,000 were built. Super Cubs are commonly found in roles such as bush flying, banner towing and glider towing. 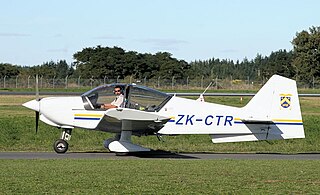 The SOCATA Rallye is a light aircraft that was manufactured by French aviation company SOCATA. It was originally developed during the 1950s by French aircraft manufacturer Morane-Saulnier as the MS.880.

The Boisavia B.60 Mercurey was a series of four-seat light aircraft developed in France shortly after World War II. 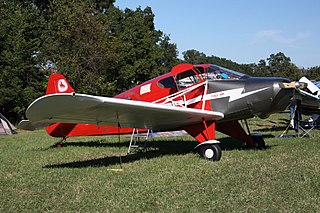 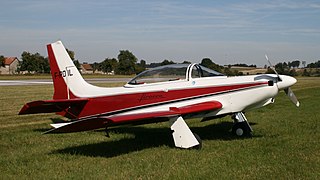 The Jurca MJ-5 Sirocco is a two-seat sport aircraft designed in France in the early 1960s and marketed for homebuilding. It is one of many wooden homebuilt designs from Romanian born designer Marcel Jurca. Jurca, a Henschel Hs 129 pilot in World War II marketed the plans in Canada and America through Falconar Aviation. It is a low-wing cantilever monoplane of conventional configuration and wooden construction throughout. The tandem seats are enclosed by a bubble canopy, and the tailwheel undercarriage can be built as either fixed or with retractable main units. Marcel Jurca died on 19 October 2001, at which time plans were still available from the designer's web site. 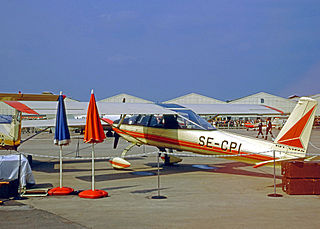 The Dream Tundra is a robust, single-engine, high-wing monoplane designed in Canada. Seating four, its short takeoff and landing characteristics can be adapted to land, snow, or water use. It is produced as a kit for homebuilding.

The Lancair 200 and Lancair 235 are a family of American amateur-built aircraft that were designed by Lance Neibauer and produced by his company, Lancair of Redmond, Oregon. The Lancair 200 was initially called the Lancer 200, but the name was changed due to a naming conflict. It was first shown at AirVenture in Oshkosh, Wisconsin in July 1985. Now out of production, when it was available the aircraft was supplied as a kit, for amateur construction.