Roderick John Grant (born 16 September 1966 in Gloucester) is an English-born Scottish former professional footballer. He played for seven clubs during a 19-year playing career, beginning as a trainee with Cowdenbeath in 1989 and closing out his professional career with Peterhead in the 2003/2004 season.

Prior to becoming a full-time footballer, Grant was a stonemason. [1] He is best known for his two spells with St Johnstone, during the former of which he scored Saints' second goal in a 3–1 win at home to Airdrie, securing promotion into the Premier Division.

Grant played in his testimonial match against Coventry on 12 November 1999.

Grant moved into junior football with Linlithgow Rose, playing for them until midway through the 2004/05 season. He finished the season with Pumpherston, where he became assistant manager to Steve Pittman at Recreation Park. [2] In the summer of 2008 Grant gained a coaching role at Stirling Albion. [3] Grant was appointed assistant manager at Stirling in the summer of 2010, [4] before taking up a post with Perth & Kinross Council.

In November 2011 he was named as the administrator for Super Saints Lotto at his former club St Johnstone. [5] Then, in July 2012, he became an associate director at the club. 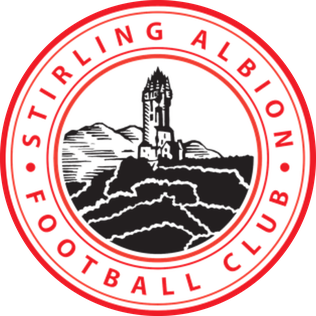 Stirling Albion Football Club is a Scottish football club based in the city of Stirling. The club was founded in 1945 following the demise of King's Park after World War II. The club currently competes in Scottish League Two as a member of the Scottish Professional Football League. Its highest league position came in 1958–59 with a 12th-placed position in the top flight. Its only major success is in the league where it has won the second tier of Scottish football on four occasions, the last coming in 1964–65. The club has more recently competed in the third or fourth tier following league re-construction in 1975 and 2013.

Allan Moore is a Scottish football player and manager, who is currently assistant manager to Danny Lennon at Clyde.

Kevin John Moon is a Scottish footballer, who last played as a midfielder for Scottish League Two club Stirling Albion. He began his career with St. Johnstone and was part of the side which gained promotion to the Scottish Premier League in the 2008–09 season. He also tasted promotion with Alloa Athletic and won the Scottish Challenge Cup with both St. Johnstone and Raith Rovers. He has also played in Australia for ECU Joondalup SC.

Steven Milne is a Scottish former professional footballer who played as a striker for Dundee, Forfar Athletic, Plymouth Argyle, St. Johnstone, Ross County and Arbroath. Milne received a runners-up medal in the 2003 Scottish Cup Final, where Dundee lost 1–0 to Rangers. He won the Scottish Challenge Cup in 2007 and the Scottish First Division in 2009 with St. Johnstone.

Frazer Wright is a Scottish former professional footballer who is currently an assistant coach at Lowland League club BSC Glasgow.

Patrick Connolly is a Scottish football player and coach. In a twenty-year playing career, he made over 100 appearances for both Dundee United and St Johnstone; he also played for Airdrieonians, Greenock Morton, Ayr United, Stirling Albion and Brechin City. He made three appearances for the Scotland under-21 team in 1990.

Kieran Liam McAnespie is a Scottish footballer who manages Cumbernauld United. Capable of playing in defence and midfield, McAnespie represented Scotland at under-21 level and has played in the Scottish Premier League for St Johnstone and Hearts.

Christopher Aitken is a Scottish retired footballer who is currently assistant manager to his elder brother Stephen at East Kilbride.

Laurie Ellis is a Scottish football coach and former professional footballer, who is currently assistant manager of Scottish League Two club Queen's Park. Ellis played for Raith Rovers over three spells, St Mirren, Cowdenbeath and Stirling Albion. As a coach, he has twice served as caretaker manager at Dundee United.

David Robert Mackay is a Scottish professional football player and coach, and currently the assistant manager of Dundee. He played as a defender for Dundee, Brechin City, Arbroath, Oxford United, Livingston and St Johnstone. Mackay captained St Johnstone when they won the 2014 Scottish Cup Final. After retiring as a player in 2016, Mackay was then manager of Stirling Albion for two years, before returning to Dundee.

Alexander Duncan Rennie was a Scottish football player and manager who played as a defender. He played for St Johnstone between 1968 and 1975, making almost 200 league appearances, and later managed the club from 1980 until 1985, winning the Scottish First Division title in 1983. He also played for Rangers, Stirling Albion and Dundee United and managed Stenhousemuir.