The sport was created in the English Midlands [1] in 1882 and the first documented match was a game between local rivals Derby and Burton on 30 January of that year. A 1934 game at London's Forest Gate Roller Rink, between two teams of female players, was filmed for an item on Pathé News. [2] Over a decade later Billboard reported in 1949 that it had been revived in Detroit, having disappeared for more than thirty years. [3]

The game re-emerged for inlines in San Francisco in 1995, when a group of friends on inline skates began playing soccer with a pine cone. They soon switched to using a football. [4] By 1998, it was described as "well established in some areas". [5]

The first Rollersoccer World Cup was held in London in 2003 and again in 2004 whereafter the tournament was rotated around the world with European and National events also emerging.

The country with most active players and the highest number of teams is France, with Marseille currently the holders of the most world titles. The sport is also played in Australia, [6] Belarus, Belgium, [7] Brazil, England, Germany, India, Russia, Scotland and Senegal.

Francis Obiorah Obikwelu, GOIH is a retired Nigerian-born Portuguese sprinter, who specialized in 100 metres and 200 metres. He was the 2004 Olympic silver medalist in the 100 metres. In the same race, he set the European record in the event at 9.86 seconds. 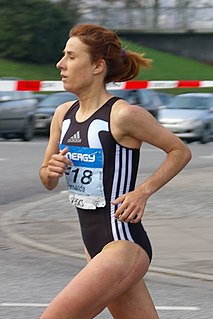 Maria Fernanda Moreira Ribeiro, GCIH, is a long-distance runner born in Penafiel, Portugal. The pinnacle of her career was at the 1996 Summer Olympics when she won the women's 10000 m gold medal, establishing a new Olympic record of 31:01.63. Her victory gave Portugal its third Olympic gold medal.

Bracknell Queen Bees IHC is a women’s ice hockey club based in Bracknell, Berkshire, England. They are located at the John Nike Leisuresport complex in Bracknell. Their home ice rink is affectionately known as the Hive.

Mario De Clercq is a former Belgian racing cyclist. He specialized in cyclo-cross racing but also rode on the road and circuit races during his career, he raced as a professional between 1991 and 2004. The majority of his years as a professional were under the sponsorship of Palmans and its various co-sponsors. 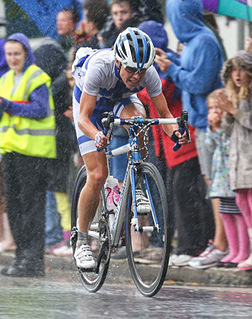 Abdelhafid Benchabla is an Algerian boxer. He represented Algeria at the 2008 Summer Olympics in Beijing, China, and the 2012 Summer Olympics and is the current World Series of Boxing Light heavyweight champion.

The 2008–09 Biathlon World Cup was a multi-race tournament over a season of biathlon, organised by the International Biathlon Union. The season started on 2 December 2008 in Östersund, Sweden and ends on 29 March 2009 in Khanty-Mansiysk, Russia. 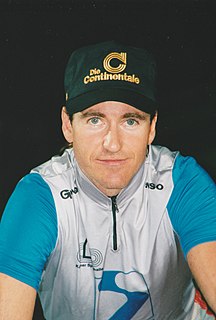 Vert skating or vertical skating is a discipline of aggressive skating in which inline skates or roller skates are used on a vert ramp, a style of half-pipe. In vert skating, the skater is able to achieve more air-time as compared to other styles of aggressive skating, meaning skaters can perform complicated aerial maneuvers and acrobatic tricks, such as spins and flips.

Alberto Arakaki is a Brazilian professional vert skater. Arakaki started skating when he was 6 in 1978, met aggressive inline skating at age 20 (1995) and turned professional in 1996. Arakaki has won many competitions in his vert skating career.

Cesar Mora is an Australian professional vert skater and a pioneer in vert skating. He has strong beliefs in being a role model, as he has never believed in the use of drugs, alcohol, or cigarettes Cesar is the only vert skater to compete in all of the 1st ten X Games. In 1998, he won vert gold, and he has two vert silver medals and a bronze ('00). A number one ranked skater and world champion several times. Skating for Roces skates from 1994 to 1998 then switching to K2 skates from 1999 to 2004. Born in Madrid, Spain, 3 February, and having lived most of his life in Sydney Australia, Cesar represented Australia also in soccer at a youth level, travelling to US and England before landing in his city of birth Madrid and training with professional Spanish side Rayo Vallecano for several months who at the time were in the 4th division of the Spanish league. He returned to Sydney and started skating at the beautiful Bondi Beach where he honed his skills on the ramp and launched himself on an international skating career that took him around the world and back several times. Always creative, explosive and exciting to watch, Cesar made his mark on many up and coming skaters offering a drug-free life style and a healthy living. An artist, not only on the ramp and soccer field, Cesar also loves art, illustration, creative drawing and is a qualified graphic designer. His many achievements didn't go un-noticed and at the change of the century he headlined a video game called Roll, sharing the titles with some of the best skaters in the world. Sometimes referred to as the king of vert, Cesar pushed the sport in 1998 by being the 1st skater in history to land a 1080 and later on that year a reverse 1260. Hailing from the very innovative Australian skating scene he always tried to push the boundaries and try new things, create new ways of performing tricks and innovating, adding his unique style to everything he did, and with these efforts and risks comes injuries, he certainly had his share but somehow managed to avoid broken bones until the end of 2000 whilst performing at the melbourne planet x games he fell and broke his left arm and wrist. The physical recovery was fast but the mental recovery took some time, and that year he took on less competitions and concentrated on healing and safety. Once the confidence returned the usual big tricks were on display and among the variety of spins, flips and airs for many years he was known for his giant backflips, always a crowd pleaser. Cesar, ever the showman, never left a ramp without giving his all, whether it be the x games or a small show in a village in Peru where the ramp may have been less than appropriate. He always wanted to leave the kids and fans with something special and signed every autograph. He relished his position as a role model and this made him actually wear a helmet, because when he started and on his 1st tour of the states he never liked wearing a helmet and was told no helmet-no skate. A proud person with an enviable list of achievements, he relished his time on tour and is always grateful of anyone who helped him along the way.

The Battle of Toulon (1944) was an urban battle of World War II in southern France that took place August 20–26, 1944 and led to the liberation of Toulon by Free French forces under the command of General Edgard de Larminat. 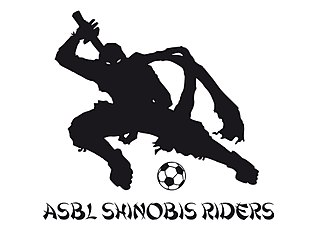 The ASBL Shinobis Riders, more commonly referred to as Shinobis Riders, is a Belgian roller soccer club created in Brussels in 2009 and directed by Joël Ogunade. It is the first roller soccer club which was born in Belgium and the only one existing in the country until the Bruxelles Roller Foot appeared in 2013. The team is a member of the Belgian Frenchspeaking Skating Federation and currently challenging in the French League of Roller Soccer.