Ron Sparks (born May 20, 1977) is a Canadian comedian, actor, writer and producer. He was born in Chatham-Kent, Ontario and lives in Toronto, Ontario. He is best known as an alternative comedian and frequent guest on CBC Radio 1's The Debaters, and on TV as a regular and favourite juror on MuchMusic's highest-rated show, Video on Trial , also starring as The Judge in the Stars on Trial Christmas special and various other VOT spin-offs.

Sparks first began performing with York University's Vanier Improv Company as a student. His sketch troupe, The Minnesota Wrecking Crew, were nominated four straight years (2003–2006) for Best Sketch Troupe Canadian Comedy Awards, winning in 2003 and 2004. In 2006 they won again for Best Taped Live Performance for the CBC special Sketch with Kevin McDonald . [1] He later became a member of the CCA-nominated troupe Shoeless.

He began performing stand-up in 2003 at The ALTdot COMedy Lounge and other venues around Toronto, and won that year's Tim Sims Award, given to Toronto's most promising new comedy act. [2] He then also won the 2004 Canadian Comedy Award for Best Stand-up Newcomer, becoming the first person to win both. Frank Magazine described him as "the next stand-up wunderkind". Stand-up credits include the Halifax, Winnipeg and Just for Laughs Comedy Festivals. He was JFL's Toronto Homegrown Champion in 2007 and has performed in various JFL and JFL-42 shows, including Set List, The Alternative Show with Andy Kindler , The Debaters, and opening for such acts as Kyle Kinane, Moshe Kasher, Tom Green, Russell Peters and Kevin Pollak.

On television he starred in MuchMusic's highest rated show Video on Trial and its spin-off, Stars on Trial . He plays Chris Christie in the 2016 series You Got Trumped. He was also a regular panelist on the Super Channel series Too Much Information. His 2008 CTV Comedy Now! stand-up special won a WorldFest Award and two Canadian Comedy Awards. He has also been a regular on various Ed the Sock series (including the cult hit This Movie Sucks!) and The Toronto Show. Other TV credits include NBC's The Firm, The Beaverton , This Hour Has 22 Minutes, Meet the Family, Straight Man, Clumsy & Shy, Dark Rising: The Savage Tales of Summer Vale, The Jon Dore Television Show, Sox in a Box and The Invasion Report. He has also appeared in such films as Medium Raw, Dark Rising, By George, Sweetener and Ham & Cheese.

Sparks is a regular and favourite guest on CBC Radio's The Debaters (which he also writes for). He has also appeared on Brave New Waves , Definitely Not the Opera and Out Front. He had his own weekly segment The Newsdesk with Ron Sparks on 102.1 The Edge, based on his live news show.

Ron has written for such series as This Hour Has 22 Minutes, Little Mosque on the Prairie, You Got Trumped, Meet the Family, Still Standing, Spun Out, Life's a Zoo, Satisfaction, Crash Canyon, The Debaters, This Movie Sucks and Really Me. He also wrote his own series of shorts for The Comedy Network, From the Desk of Ron Sparks. Before working in television he was an award-winning playwright, with titles including Home to Mother, A Thanksgiving That Would Even Make Great Aunt Gladys Proud, Chuck Sent Me, My Favourite Aunt and Richard Keats' Apartment of Doom.

He is not related to fellow comedian Hal Sparks. He is the subject of The Essential Actor's Guide: Spotlight on Ron Sparks, part of a series of 32 books about actors; other subjects include Javier Bardem, Daniel Day-Lewis, Colin Firth, Philip Seymour Hoffman, Angelina Jolie, Tommy Lee Jones, Heath Ledger, Brad Pitt, Julia Roberts and Kate Winslet.

In 2006 Sparks offered to fight Uwe Boll, who had challenged his critics to a series of boxing matches leading up to the release of his movie Postal . After exchanging several emails Boll ultimately declined due to Sparks's size advantage and because he would be fighting five challengers back-to-back.

At the 2007 Awards' "State of the Industry" event, Ron was unofficially voted "North America's Sexiest Comedian" after host Harry Doupe ran his name against Nicole Arbour. This was in response to Arbour having billed herself with that title despite never actually having won it anywhere. Neither comedian was in attendance.

On Video on Trial he began listing himself as having fake occupations instead of just "comedian", which became a regular joke on the show. He has been billed as such things as (in order of use):

In one episode Sean Cullen appeared briefly, credited as "Ron Sparks", after Ron said the video was too bad to watch and brought Cullen in as a "stunt double".

Seán Cullen is a Canadian actor, voice artist and stand-up comedian. He is known for combining improvisation with mimicry and music. Cullen has been described in Time as the "vanguard of comedy's next generation". He also is best known for providing voices of characters in shows like Best Ed, Seven Little Monsters, and Almost Naked Animals. 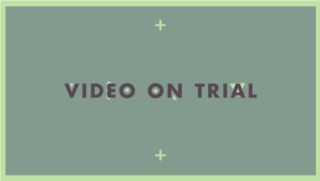 Video on Trial is a Canadian comedy television program that airs on Canadian television network MuchMusic. The show consists of a panel of musicians, comedians, and entertainment columnists critiquing five different music videos in a courtroom-esque manner. The panel acts as the jurors, poking fun at and questioning each artist's behaviour in each video. Artists' personal lives and off-set behaviour are usually mocked by the critics in relation to the music video. They are shown in separate clips to use their opinions.

Trevor Boris is a Canadian comedian, writer and television producer.

Nikki Payne, is a Canadian comedian and actress, from Lower Sackville, Nova Scotia, Canada. Born with a cleft palate, she is well known for incorporating her lisp into her comedy act. She has won three Canadian Comedy Awards for Best Stand-up Newcomer and Best Female Stand-up in 2003, 2005 & 2008. 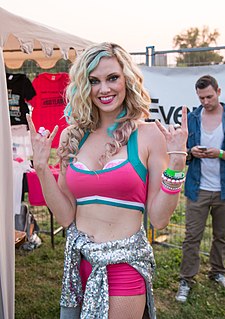 Nicole Arbour is a Canadian actress, comedian, choreographer, singer and YouTuber. She is known for her work in acting on television and film, as well as her YouTube content.

The Minnesota Wrecking Crew is a Canadian sketch comedy troupe, featuring members John Catucci, Josh Glover, Mike 'Nug' Nahrgang and Ron Sparks. They all met as members of The Vanier Improv Company. The group won two consecutive Canadian Comedy Awards for Best Sketch Troupe (2003-2004), and were nominated again in 2005 and 2006, making them one of the country's most successful comedy groups.

The Debaters is a Canadian radio comedy show hosted by Steve Patterson. It airs on CBC Radio One Saturdays at 1:30PM and Wednesdays at 11:30AM.

Laurie Elliott is a Canadian actress, voice actress, television writer, and stand-up comedian. She voices Jo on Total Drama. currently she is a writer of Corn & Peg

Harry Doupe is an award-winning Canadian stand-up comedian, producer, and writer from Fort Langley, British Columbia. He has performed shows at clubs, theatres, and arenas across North America. He was the first comedian to perform three times at Toronto's Air Canada Centre, MC-ing shows for The Tragically Hip on their New Year's Eve 1999 and New Year's Day 2000 shows, as well as opening for "Weird Al" Yankovic on his "Running With Scissors" Tour. He began his stand-up career on December 7, 1982 at Punchlines Comedy Theatre in Vancouver, choosing the date carefully. "I figured no matter how badly I bombed, historically it would be greatly overshadowed". Over the years he would perform alongside the likes of Jim Carrey, Sam Kinison, Louis CK, Jerry Seinfeld, Margaret Cho, Howie Mandel, Paula Poundstone, Norm Macdonald, Maria Bamford, Rick Mercer, Samantha Bee, Lewis Black, Janeane Garofalo, Todd Barry, and others.

Fraser Young is a stand-up comedian who lives in Toronto, Ontario but headlines right across Canada, and as far away as Hong Kong.

The Halifax Comedy Festival is an annual comedy festival held in Halifax, Nova Scotia, Canada. The festival is sponsored by the CBC which tapes and broadcasts the comedians' sets as a series of television specials, and is usually about one week long. Shows frequently take place at the Halifax Casino in The Schooner Showroom among other venues.

Josh Saltzman is a Canadian Comedy Award winning comedian, writer and director from Toronto, Ontario who currently resides in Los Angeles. He was the head writer of DHX Media's new Inspector Gadget series produced for Teletoon in Canada, and has written for many television shows including: HBO Canada's Call Me Fitz, Disney XD's Fangbone! CBC's This Hour Has 22 Minutes and many others. Saltzman won the 2010 Canadian Comedy Award for best Web Clip for his video "That Thing That Happened" which he co-wrote, co-directed and starred in with Lindsay Ames. He is also the winner of the 2008 Tim Sims Encouragement Award as 7 Minutes in Heaven. He was a member of the Canadian Comedy Award-winning sketch troupe The Sketchersons from 2009 - 2010. He has appeared on the Comedy Network on the show Upload Yours in which he had an entire episode devoted to his Online videos

Naomi Snieckus is a Canadian actress and comedian, best known for her regular television role as Bobbi in Mr. D and her appearance as Nina in Saw 3D.

D.J. Demers is a Canadian stand-up comedian, best known for his television appearances on season 11 of America's Got Talent and on the late night talk show Conan. Originally from Kitchener, Ontario, Demers was diagnosed with hearing loss in childhood, and focuses his comedy largely but not exclusively on his experiences as a person who wears hearing aids.

Martha Chaves is a Nicaraguan-Canadian comedian, actress, activist and playwright. She performs comedy in English, Spanish, French and Italian. She is a regular in the comedy circuits in Canada, the United States and Latin America, at Just for Laughs and other major festivals, and on CBC Radio.