Brave New Waves was a Canadian radio program which aired on CBC Stereo, later known as CBC Radio 2, from 1984 to 2007. [1] Airing overnight five nights a week, the show profiled alternative and indie music and culture, including film, comics, literature and art. [2] The show was once described by longtime host Brent Bambury as "explaining fringe culture to a comfortable mainstream audience," [2] and by his successor Patti Schmidt as "invented with an idea of what John Peel's show was, but without ever having heard it." [2]

The show was created after Augusta La Paix submitted a demo tape for a show on avant garde culture, featuring music by Laurie Anderson, Brian Eno, Klaus Nomi and Nina Hagen. [3] In an early interview with The Globe and Mail , La Paix told the newspaper that she was only a recent convert to underground music, having previously been primarily a fan of country music. [3]

Produced throughout its run at the CBC's studios in Montreal and originally hosted by La Paix, the show aired for the first time on February 6, 1984. [2] The first song it ever played was Simple Minds' "Promised You a Miracle". [2] In its first year, the show was briefly the subject of a police investigation into obscenity charges, when a CBC employee who disliked the show filed an anonymous complaint about an interview with underground performance artist Karen Finley, although the investigation was dropped by the police without charges. [2]

The show's initial audience figures could not be directly measured, as the Bureau of Broadcast Measurement did not track radio ratings for the show's overnight time slot; however, indirect indications of success were available as both its lead-in and lead-out programs, A Little Night Music and Stereo Morning, posted significant and sustained audience gains after Brave New Waves debuted. [3]

In 1985, La Paix left the show to become host of CBC Stereo's Two New Hours, [2] and was replaced by Bambury, [2] previously a researcher for and occasional substitute host of the show. Music programming in these days, was the work of Kevin Komoda, who later went on to produce the first in studio sessions.

Throughout the 1980s, Brave New Waves was an influential show, providing many Canadians without access to campus radio with their main exposure to alternative music, [2] and was widely credited for significant increases in both record sales and concert attendance for both Canadian and international bands who were playlisted on the show. [2] In addition, the show also increased the profile of underground and experimental writers and artists and filmmakers, including Laurie Anderson, Kathy Acker, bill bissett and Todd Solondz. [4]

In 1990, the program was scheduled to receive a short-term trial run on WXPN in Philadelphia, with an eye toward being picked up for U.S. syndication by National Public Radio; [5] however, due to the obscenity controversies that were prominent in American music at the time, NPR opted to cancel the contract because Brave New Waves did not censor songs with potentially objectionable lyrics. [5]

In the 1990s, when alternative rock became the decade's dominant commercial genre, the show kept its focus on the underground. [2] In 1995, Bambury left the program to become cohost of CBC Television's Midday , and was replaced by Patti Schmidt, who also became the executive producer of the program. [2] Since 1991, she had been writing and programming music for the show. Schmidt remained the program's main host for the remainder of its run; however, due to budgetary pressures at the CBC, Schmidt was forced to work with a smaller staff and budget than Bambury had enjoyed, with the result that the program became more squarely focused on playing music, with interviews reduced to one per week. [2] The program became a reference and filter for all manner of new and contemporary music from indie rock, pop, metal and weird folk, to IDM, electronic dance music, edgy hip hop, avant garde jazz, noise, sound art, modern classical and all things uncategorizable.

On May 27, 2006, the program aired an episode which was structured as a finale, with Schmidt conducting the show as a wrap party and then ending it by naming and thanking everybody who had ever worked on the show from its premiere in 1984. [2] The final piece of music played was William Basinski's "Disintegration Loops". Although the show continued to air after that date, for the remainder of its run it was reduced to just one hour per night of new programming hosted by a rotating stable of guest hosts, with the remaining three hours filled by repeats of past BNW programs. [2]

The show was inducted into Hour magazine's Montreal Rock'n'Roll Hall of Fame in 2010. [7]

In 1988, the program also began recording live in-studio sessions curated by producer Kevin Komoda, some of which were released on the 1991 compilation album Brave New Waves. [2] It was released in 1991 on CBC Records, the Canadian Broadcasting Corporation's internal record label. 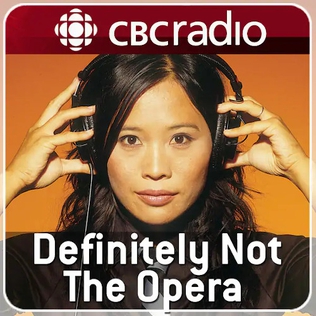 Definitely Not the Opera was a magazine-style radio program focusing on aspects of pop culture and storytelling, that aired on CBC Radio One on Saturday afternoons from 1994 until 2016. The show's running time varied over the years, though it ran for a full hour in its final year. An abridged version of each program is available for download as a weekly podcast, with an abbreviated sister edition called Your DNTO, airing on Tuesday afternoons and featuring listener-submitted content.

CBC Radio is the English-language radio operations of the Canadian Broadcasting Corporation. The CBC operates a number of radio networks serving different audiences and programming niches, all of which are outlined below.

Go! was a Saturday morning entertainment show on the Radio One network of the Canadian Broadcasting Corporation that ran from 2002 to 2010, hosted by Brent Bambury. The show included interviews, music, live performances, and comedy bits.

Fifth Column was a Canadian all-female post-punk band from Toronto, formed in the early 1980s.

Midday is a newsmagazine television program broadcast on CBC Television, which ran from January 7, 1985 to June 30, 2000, replacing local noon-hour newscasts on CBC stations. The program, which aired from noon to 1 p.m. on weekday afternoons, presented a mix of news, lifestyle and entertainment features.

After Hours was a jazz-oriented program that aired from Monday to Friday from 10:05 p.m.-12 midnight on CBC Radio 2. The show was hosted by Andy Sheppard and originated from CBC Radio 2's Winnipeg studio at CBW-FM. It was created by Ross Porter, Kinsey Posen and Tom Anniko.

Night Lines was a Canadian radio series, which aired on CBC Stereo from 1984 to 1997. The show, which aired on Friday and Saturday nights, profiled independent and alternative music. It was a weekend companion to the network's weekday overnight show Brave New Waves, and aspired to revive the freeform style and creative experimentation associated with rock radio stations in the 1960s and 1970s.

Patti Schmidt is a Canadian radio personality from CBC Radio and a former singer and bassist. She currently lives in Montreal. 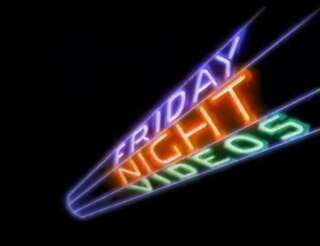 Friday Night Videos is an American music video show that was broadcast on NBC from July 29, 1983 to May 24, 2002. It was the network's attempt to capitalize on the emerging popularity of music videos as seen on MTV. From January 5, 2001 to August 30, 2002, the show changed to Late Friday showcasing new stand-up comedian talent with original video of sets from a stand-up club like setting, with an established comedian as guest host. 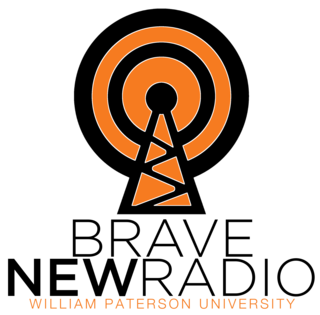 RealTime was a Canadian radio show, which aired Saturday evenings on CBC Stereo from 1994 to 1997. Hosted by Leora Kornfeld, the series was a pop-culture magazine and interview show, and served as the CBC's first major foray into Internet broadcasting by integrating Internet technologies such as e-mail, IRC and audio streaming into its program format.

Canada Live is a Canadian radio program aired on both CBC Radio One and CBC Radio 2 since 2007. It debuted on March 19, 2007 on CBC Radio 2, and airs concert performances in a variety of musical genres from locations across Canada.

q with Tom Power is a Canadian arts magazine show produced by and airing on CBC Radio One, with syndication to public radio stations in the United States through Public Radio Exchange. The program mainly features interviews with prominent cultural and entertainment figures, though subjects and interviewees also deal with broader cultural topics such as their social, political and business aspects, as well as weekly panels on television/film and music on Mondays and Fridays respectively.

Three O'Clock Train is a Canadian alternative country band from Montreal, Quebec. Active from 1984 to 1996 in their original incarnation, the band reunited in 2012.

The Entertainers was a Canadian radio program, which aired on CBC Radio and CBC Stereo from 1971 to 1992. Initially conceived as a magazine-style show on all aspects of popular culture, the show gradually narrowed its focus to concentrate almost entirely on musical culture, showcasing music from many different genres through documentary features on musical history, feature interviews with influential musicians and recordings of live concert performances.